Hi all! I'm back! Sorry I haven't been in this space in a while, but I've been focusing on other things -- like my running -- over the winter, and truthfully wanted a bit of peace and quiet for a while. I hope to post something after every race during the IndyCar season, and other times when the spirit moves me.

Anyway, I was a little excited last fall when there was talk of the series racing in Dubai, because at the time I already knew that Darcy and I would be coming here so she could attend a trade show. Needless to say, I was disappointed that it fell through because that would've been quite the experience.

We arrived in Dubai last Friday (2/7) and even without the race the place has been quite the experience. The city is amazing, very modern and pretty much brand new. The people take great pride in keeping the city clean -- I saw a worker cleaning the steps in a Metro station with a spray bottle and a rag -- and they are amazingly friendly and helpful. It's also a benefit that everyone speaks English (and the signs are in both English and Arabic), and that makes it very easy to get around and do things.

I have been posting pictures of our adventures on my Facebook page, which is public so anyone can view it (I think). So check them out there.

So despite there not being an IndyCar race, we decided to head out to the Dubai Autodrome to check it out. I was hoping to get into the single seater experience, but if I couldn't do that I was at least going to try doing some karting. 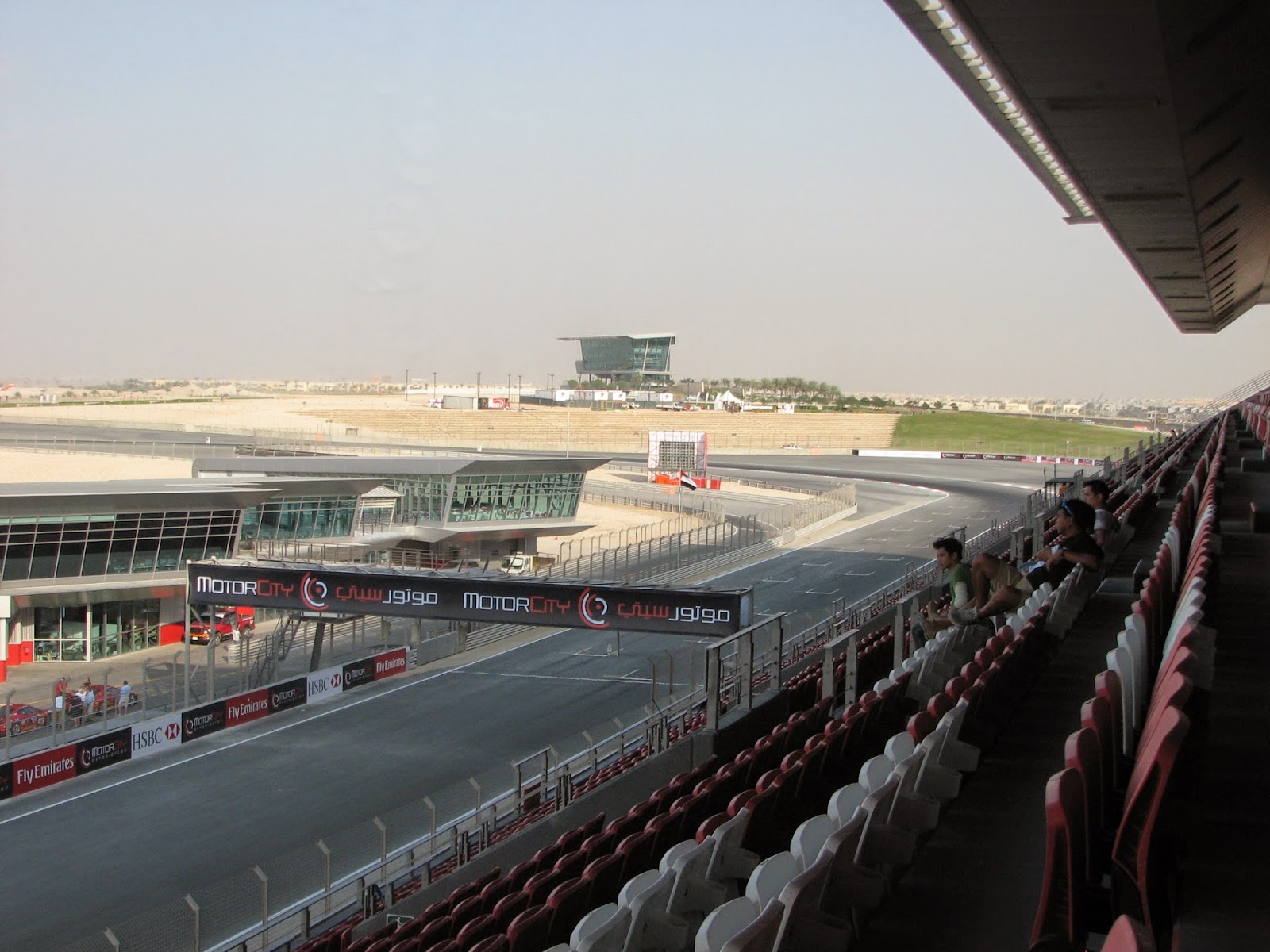 The cab dropped us off at the wrong place and we ended up at the kart track. They weren't sure about the big track experiences but one of the guys was nice enough to load us into a van and take us to the Autodrome. Let me tell you, the place was awesome! From the "welcome center" we could only see part of the track but it is an incredible facility, and the track looked glass smooth. Here is a view from the grandstand.

Unfortunately, they were booked up for the single seater experience (and couldn't fit me in at all the rest of the week), but the guy who organized the events was nice enough to show me the room where they did the classroom portion. There was a Formula Ford car in there and he let me sit in the car for as long as I wanted. He showed me some of the features of the car and he said that there was "no traction control and no power steering" and I thought, "yes, then that makes it a proper race car!" 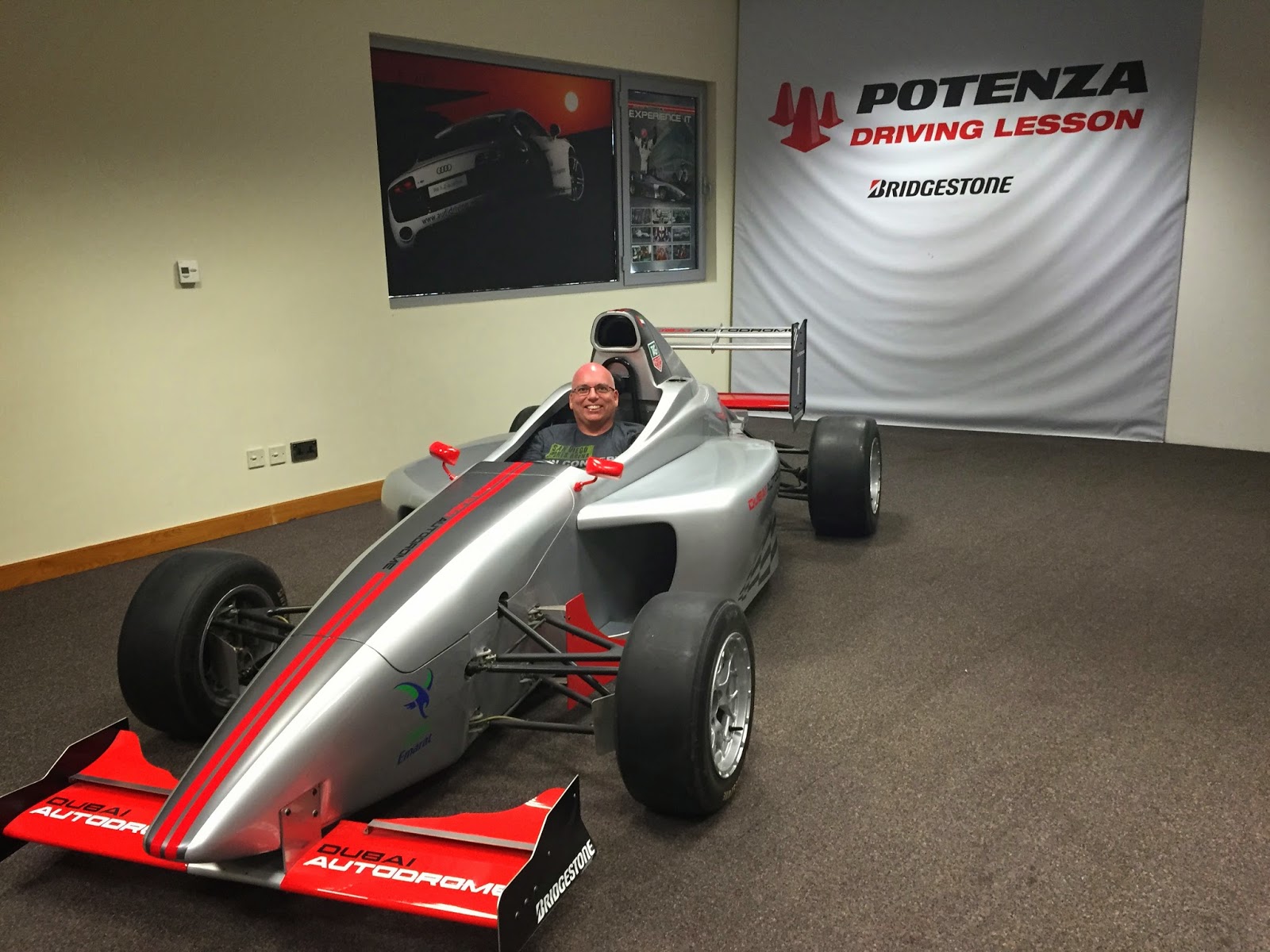 Sitting in the car was awesome, but it kind of added to my disappointment too. Maybe someday I'll be able to go back and drive one! I guess there are three levels to the experience, you start on a side track (a short oval), move to a bigger configuration in the second level, and finally they let you onto the big track, which is just over five kilometers in length.

Next he took me back out to the lobby. The track offers other driving experiences, and one involves the Audi R8 with the V10 engine, and one just happened to be sitting there! He came over and unlocked the car and let Darcy and I sit in there. 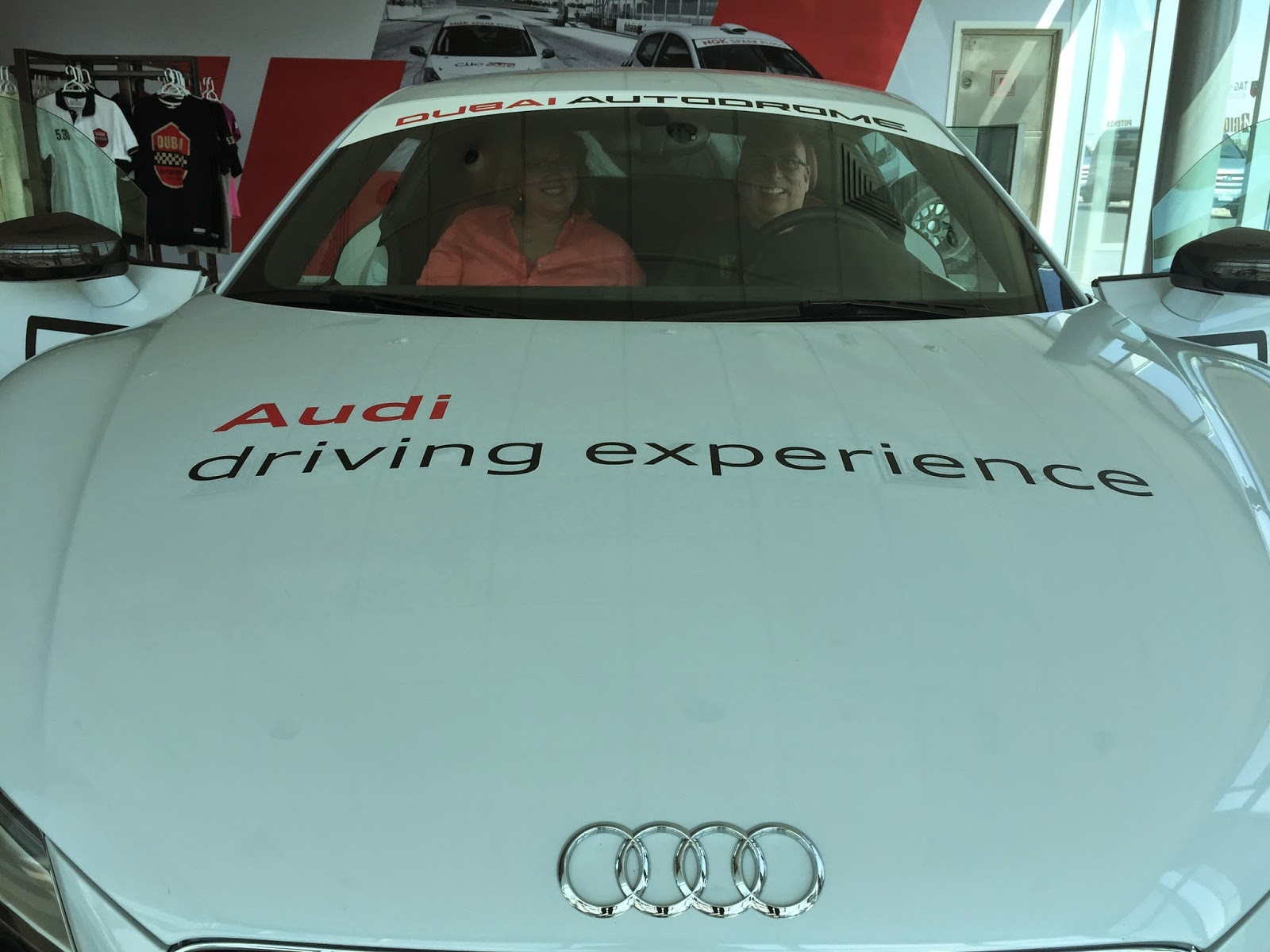 One thing you find a lot of in Dubai are supercars -- I've seen plenty of Ferraris, Porsches and Lamborghinis -- and this car was truly awesome, even standing still! I would've loved to have started it up and given it a bit of a drive on the track.

After looking around for a while longer, we headed back to the Kartdrome. There are an indoor and outdoor track there, and both of them are competition tracks, which means they have ultra smooth surfaces, rumble strips and even kerbing in the corners.

The track, which is 1200 meters around, also has 24 garages for karts during competition weekends. Needless to say, these people are serious about their karting! 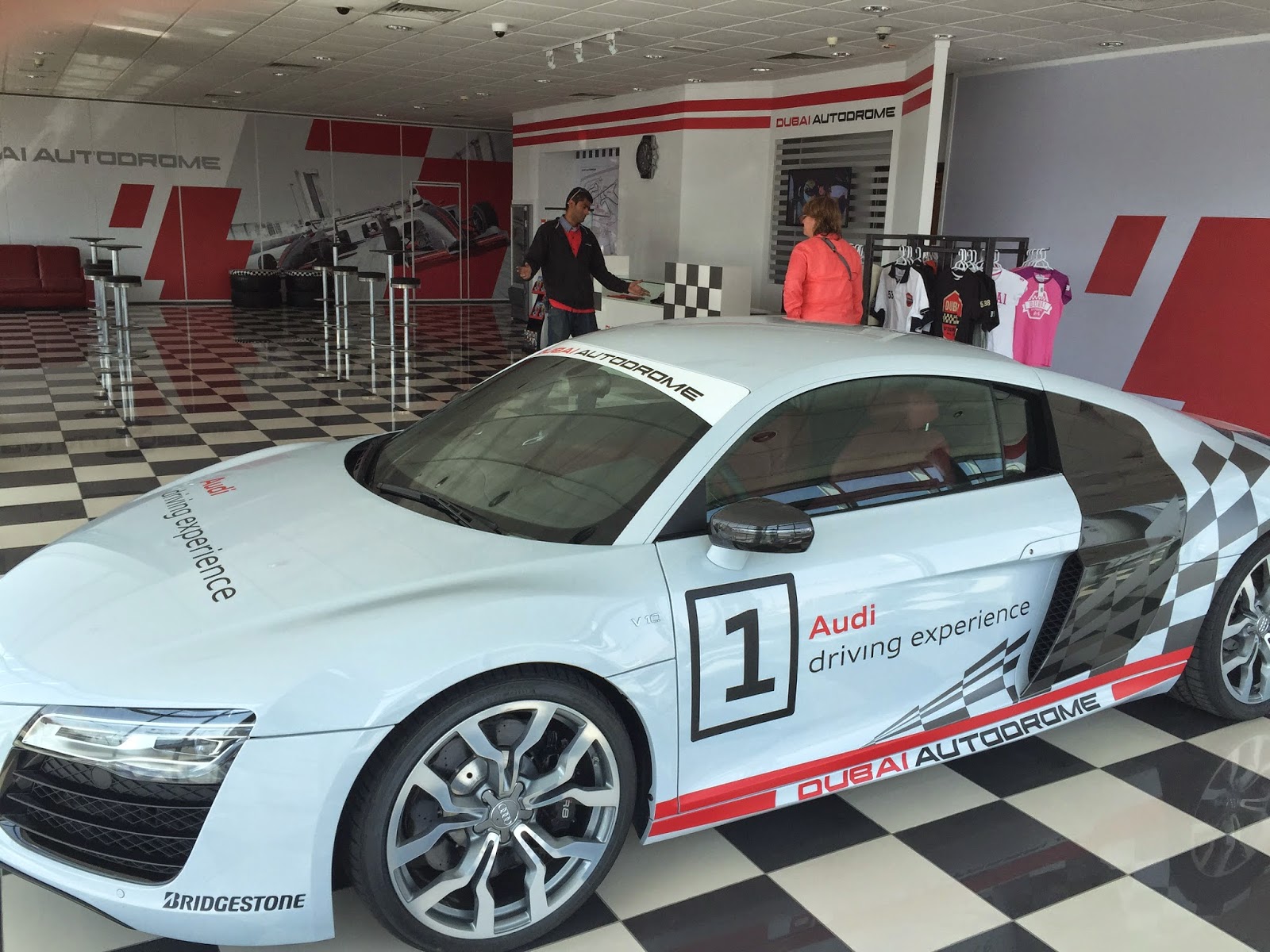 I got signed up and after a quick classroom session (which lasted two minutes because the guy could tell I had done this a few times) got suited up. This included a driver's suit, gloves and helmet.

Once I was all set up, myself and two other drivers went out to meet up with an instructor and get into our carts. The guys I was driving with for this 15 minute session brought some of their own equipment, so I had a feeling I would just be logging laps by myself.

Once we got settled into our cars (I was driving the 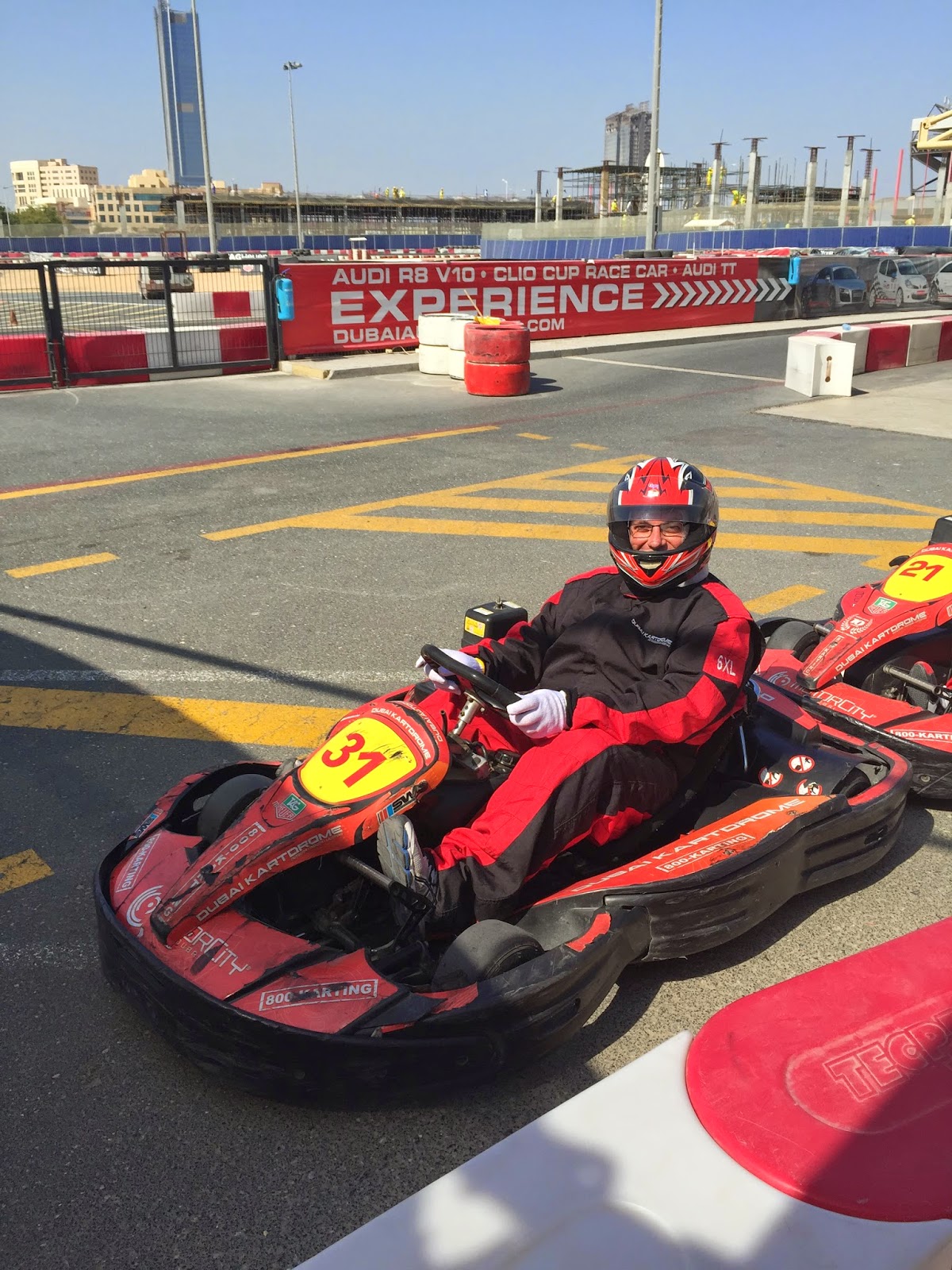 No. 31), the instructor took us for a slow lap around and showed us the racing line. Once we got back to the main straight he turned us loose. I was first in line but knew that wouldn't last long, so I went low and let the other two guys pass me. Good thing too, because they were gone in a hurry!

I would guess the kart topped out at 45 mph or so, which does look fast since you are sitting so close to the ground. Our 15 minutes was up way too quickly, but I can tell you that first 15 minutes gave me an example of how hard driving an IndyCar could be. I unzipped my suit and my shirt underneath was soaked with sweat, as was my balaclava. My shoulders and upper arms were also kind of sore just from steering the car.

The track has transponders that give out lap times, and the first two guys had laps in the 1:14-1:15 range, while my best lap was 1:27. Ugh. Then again, it looked like they were serious drivers, but what is scary is that I discovered the fastest lap of the month was 1:10 and the fastest of all time in those karts was 1:08! Wow.

I had fun but wasn't really satisfied with how I did, so I went in and paid for another 15-minute session. One thing I'd also realized is that I was trying way too hard. I was trying to tell the kart exactly what to do, and going fast(er) is in reality a compromise between what you want to do and what the car wants to do. Letting the kart (car) free up and let it do its thing is so important. 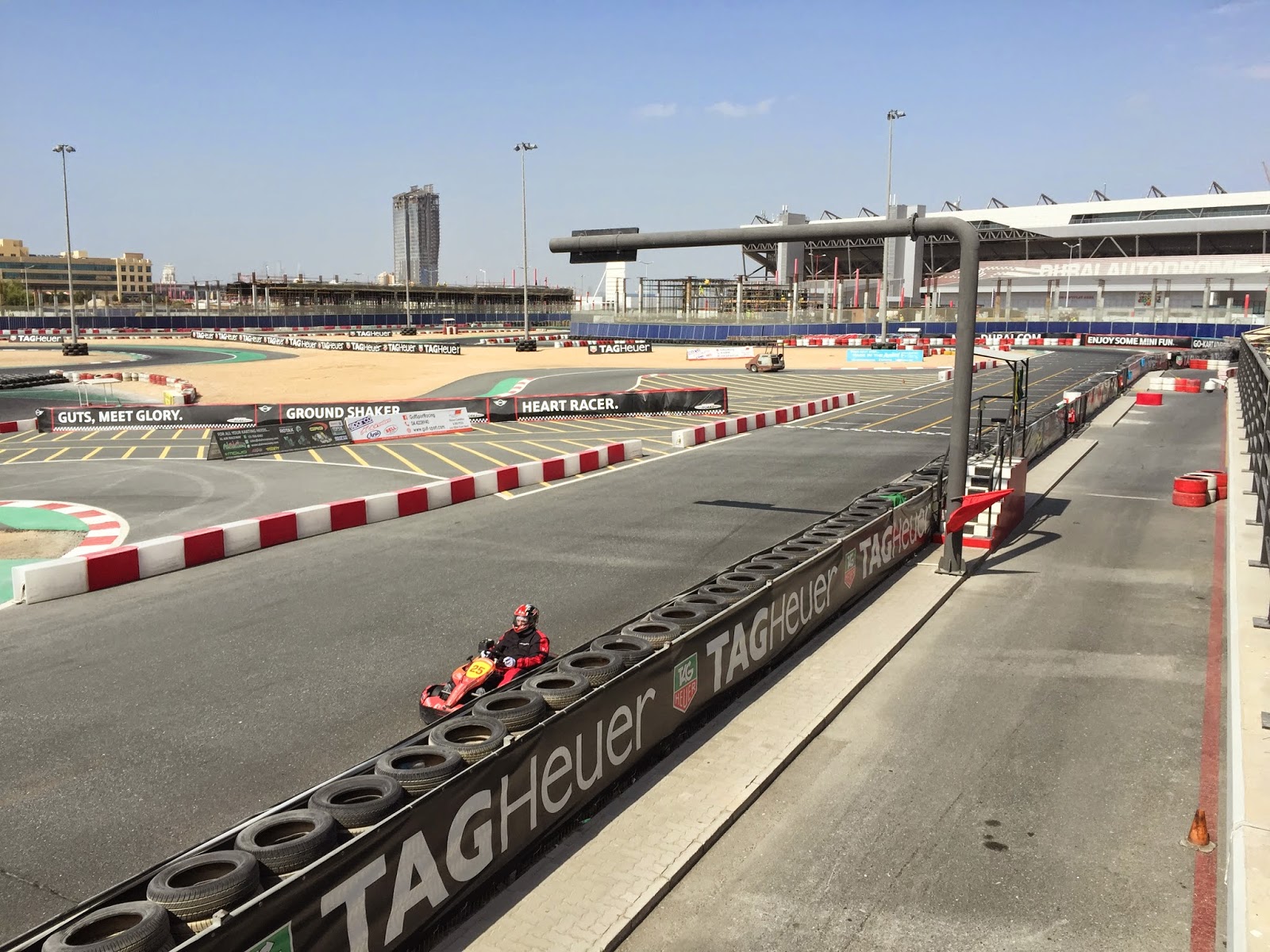 One other thing I decided to do was just trust things a little more, meaning I went into a couple of corners flat out and I got super aggressive in some of the turns. This time I started third in line and actually hung with the guy in front of me for a long time. It also made it easier to "see" the line because I just followed him and copied his movements.

The second session was a lot more fun because I just let the car go and it really responded. As a result my best time for that session was 1:20, just a second slower than the guy in front of me! 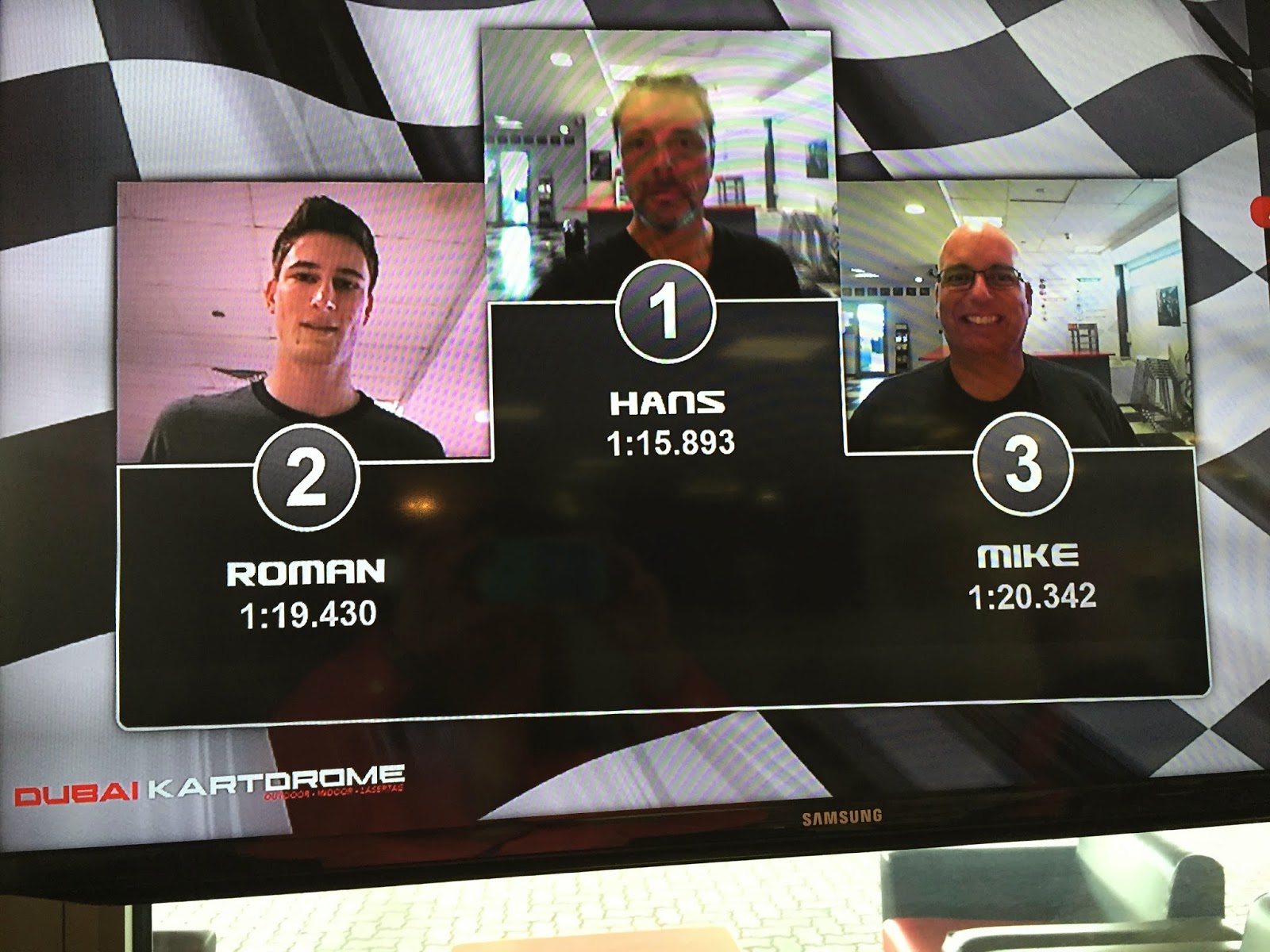 I had originally thought I was going to sign up for a third session, but when the second one finished I was done, and I consider myself in pretty good shape! Still, it was a great experience and I think over the summer I'm going to try and find a track near home and do it again. I can see where this could get addicting!

Darcy took a lot of pictures and video, so below is most of a lap from the first session. This was a lap after I spun out, which was why I was so far behind! Still, my lines coming onto and off of the main straight are pretty sweet, don't you think!