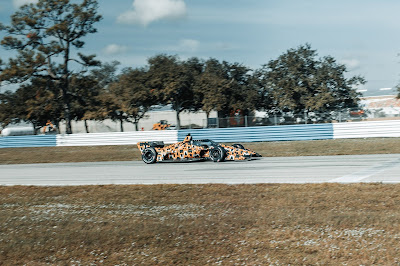 A Review of Ford V. Ferrari 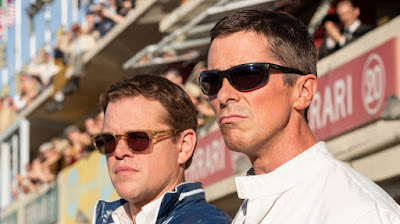 I remember seeing the trailer for Ford v. Ferrari back over the summer and my first thought was: "please don't let this movie suck".

It showed so much promise in the early trailers. It had a great story, which was also documented in the film The 24-Hour War, great actors, and, well, race cars. Not just any race cars, mind you, but cars made and raced in the 1960s, which was one of the sexiest decades for racing in history.

Thankfully, it didn't suck. As a matter of fact, I loved it.

The movie struck the perfect balance of storytelling and racing, which is so hard to do in sports films. While the movie was long at 2 1/2 hours, I didn't feel like it ever really dragged, and the length gave it enough time so that nothing really felt rushed.

In doing some research for this post, I've discovered that the writers went a bit fast and loose with some of the facts and the history, but that's what happens when real life becomes reel life. Some of the characters in the film were depicted in a way that they were not in reality. That happens far too often in a lot of movies that are based on real-life events, which is unfortunate.

The other disappointing part of the movie was many of the racing scenes. They just didn't look realistic enough on par with three of my favorite racing movies: Grand Prix, Rush and LeMans. You could tell too much of it was green screened, and if you looked closely at the 24 Hours of Daytona scene you can tell that it was done at Auto Club Speedway in Fontana. I wish they had done a better job with the racing scenes, because that would have brought the movie to the next level.

Still, the reason I liked the film is because it was about my favorite part of racing: the people. I attended 12 IndyCar races this past season and while the action on-track was amazing, of course, what I found more and more fascinating with each passing week was the people within the sport.

As we all know, it takes a village of people to put a car on track, and while the driver is the QB1 of any team, they are nothing without the people that support them. So many times I'd walk up and down pit road and just watch people as they went about their jobs.

During a typical 3-day race weekend, the cars on only on track for a few hours, the rest of the time is spent, as Steve McQueen once said...waiting. But it was so fascinating for me to watch as a collective group of people put everything they had into what they did for one person. You win as a team and lose as one, I get that, but the passion people brought to their jobs, and the friendships and bonds that were formed as a result, are a story just as compelling as the story that unfolds on the track.

I love the racing, but I love the process too. I love being at testing or practice, and I love the downtime in between. That's when the real story gets told.

If you are part of a team, you care about each other and you count on each other, and a true team is when success and failure belongs to everyone.

Plenty of people who have been in this sport a long time have told me at the end of the day the thing they remember most looking back at their time spent in racing was the camaraderie and being part of something.

I enjoyed the relationship between Carroll Shelby (Matt Damon) and driver Ken Miles (Christian Bale, who, by the way, will be up for another Oscar for this one). I enjoyed many of the scenes of the guys just being at the shop, working and testing, working and testing, to make their car go faster. That's the part of racing that I can truly relate to because I've been a part of that.

If you go into this movie as a hard-core race fan, you may leave disappointed. It's a movie made for general consumption that has less of the "gearhead" factor of 24 Hour War.

Which is OK for me, because it tells a great story. If you haven't seen it yet, definitely carve some time out of your Thanksgiving weekend to do so, and if you have, go see it again, which I probably will do too.

Is it the greatest racing movie ever made? Sadly, no, but it's still a really fun time.