Frenetic Friday -- Did You Know Edition

Since Fast Friday is more than likely trademarked (and we don't want to step on anyone's toes here at 15 Days...especially if those toes have lawyers), the Frenetic Friday portion of the program involves little known facts, statistics or my very own opinion on a particular subject.

Today is little-known facts about 500 winners: 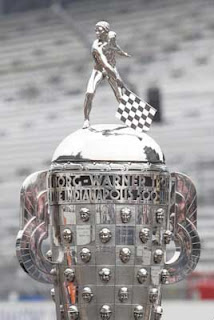 1) 1911 winner Ray Harroun may have won the 500 in his only appearance, but it wasn't the only time he tasted victory at the Speedway. Harroun finished with eight wins total, having also won smaller feature races since the track had opened two years earlier.

4)Harroun, Jules Goux, Rene Thomas, Peter DePaolo, Louis Meyer and Jim Rathmann all lived long enough to celebrate the 50th anniversary of their first race win. Rathmann joined the club last year and at 82 is the oldest living race winner. A.J. Foyt, who won the first of his four races in 1961, will hopefully mark that milestone in 2011.

5)By contrast, Ray Keech was killed in a racing accident in Tipton, PA just 16 days after winning the 500 in 1929. Sadly, a total of 13 former winners later lost their lives in racing incidents, the last being 1972 winner Mark Donohue, who was killed in 1975 during practice for the Austrian Grand Prix.
Posted by Mike Knapp at 2:56 PM