Like everyone else in the IndyCar world, I am numb right now. When the green flag dropped today I was full of excitement. With all of the other activities leading up to the race, everything was so...perfect. It seemed like for once everything was going to go right for the series and Randy Bernard's magic touch was going to send us into 2012 on a high note and continue IndyCar's climb back to respectability. 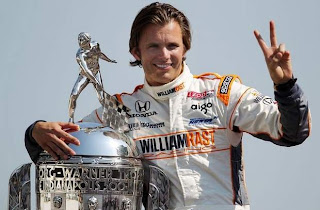 And then the bottom fell out. The carnage began and when it was over one of the greatest drivers in Indy 500 history and one of the most popular and marketable names in the sport was gone.
I think I was not the only one who became a Dan Wheldon fan over the past year or so. Years ago, I bought what the media fed me, that he was a party guy, and at times a cocky punk. I was wrong, incredibly wrong. From all accounts he was a kind and thoughful person, a great friend and family man.

Seeing the devistation on the faces of the people in the series' inner circle today, you knew that he was respected and loved. And as I mentioned in a post a few months ago, I think I know why. The guy got it, big time. He understood the history of the Indy 500, and understood the responsibility he had as one of its fortunate champions. He knew how important it was to promote the series at every turn, and that the fans are the series' lifeblood. He gave off the impression of a man who knew how lucky he was to be doing the job he did, and how important it was to pay that forward.

Despite not having a ride he made himself visible to the fans, and for a guy who spent much of this year unemployed, looked like he was having the time of his life. He was a natural in a race car and as we found out, a natural in front of the camera as well. I learned a lot about the series and the mindset of a driver thanks to his eloquent commentary as an announcer for Versus.

That all ended in a 15-car pileup today, and I just don't know what to do. In one sense, it isn't fair. People like Dan Wheldon aren't supposed to die -- they are superheroes -- they can do anything! Unfortunately, the older we get, the more we know that isn't true. They are human just like the rest of us, it's just they have an incredible skill that we don't, and it is that skill why we look up to them.

Personally, Dan provided me with one of my greatest memories as a racing fan. This year was finally the year I was able to take one of my two sons to the Indy 500 for the first time. I have great memories of going to the Speedway with my dad, and one of my dreams in life was to be able to pass my love for the track and the race to my two boys, just like my dad passed his along to my younger brother than me.

His win no doubt but a huge exclamation point on the Centennial, and while I felt for (and still feel for) J.R. Hildebrand, the drama that was the race's final quarter-lap was the perfect way to introduce someone new to the sport.

After the race Matt and I went to the museum to see the winning cars display, and on our way back to the Coke Lot we walked through the Pagoda area. Up on the balcony/walkway was Dan Wheldon finally finishing up his interviews and finally having the opportunity to celebrate his amazing day with his family and friends. We all started cheering, and he turned to us and smiled and raised his hands into the air. He had the look of a man that was just loving life. At that one moment in his life he seemed to have everything he could ever want.

Though his life ended too soon, we should all strive in our own lives to feel how he did that day. Wow, what an incredible feeling that may be!

As race fans, we understand the risk that they take when they get into a car, and those of us who have been around this sport long enough know that some of them are going to strap themselves into a car, fire the engine, leave the pits and not return. But why Dan Wheldon? And why now?

It shows us two things: 1) life is completely unpredictable and 2) that racing will never, ever truly be safe. It sucks that things like this have to happen to jolt our minds into that reality.

Now isn't the time to wonder what this does to the future of the sport, although we will all probably address that in the future. Now is the time to remember Dan Wheldon and keep his family, friends and loved ones in our thoughts and prayers. The harshest part of all of this is that he leaves behind a wife and two children, brothers and sisters and other people who cared about him.

On July 31, I wrote a post about Dan Wheldon and said how lucky we were to have him as a part of IndyCar. Those words still ring true today. We were so lucky to have Dan Wheldon in our sport, and hopefully the memory of his enthusiasm of the sport and the love he had for life will keep us going into what is sure to be a much longer off-season than it was already going to be.
Posted by Mike Knapp at 9:04 PM