Didn't have a lot of luck with the wifi at my hotel, so I have a little catching up to do! I will recap a bit about Friday later on this weekend. But for now, we are about 50 minutes from the start of Pole Day qualifying.

It gets real from here. There is nothing more democratic than how they do it here, everyone gets four laps, 10 miles, to stake their claim. Twenty-four spots will be up for grabs between 11-4, then the Fast Nine shootout gets underway at 4:30. If you remember last year, the drama went all the way up until 6 o'clock when Alex Tagliani went out last and snatched the pole from Scott Dixon.

Today should be interesting, it's gonna be very hot and the drivers that go out in the first hour will have the advantage. That should bode well for Tony Kanaan, who drew the first qualifying position last night and will hit the track just after 11 a.m.

Castroneves drew a very low number but the heat doesn't usually stop him. I heard broadcaster du jour Kevin Lee refer the the "Castroneves bravery factor", as the Brazilian usually takes it a little deeper into turn 1 than his contemporaries. Don't forget that in 2010 Helio withdrew his car at around 3 p.m. and threw down one of the most epic runs in recent history, a dash in 86-degree heat that gave him the provisional pole.

Marco Andretti didn't practice this morning, surprisingly, but Andretti Autosport must be happy with where his No. 26 machine is at right now. What is even more surprising is that an Andretti has not sit on the pole since godfather Mario (now a friend of 15DIM) accomplished that feat in 1987.

Marco has never been a good qualifier, as a 7th-place spot on the grid is the best he has managed in his six previous starts. In the last two years he has qualified 16th and 27th, respectively, although with three top-3 finishes to his credit it doesn't hurt him any.

Pippa Mann is in the Social Media Garage for a Tweetup! More on that later.

Graham Rahal is on the track now, but we have seen the highs and lows that Indy can bring. Tony Kanaan went out and put in a solid 4-lap average of 225.100 to start the festivities and stands stands fourth on the grid. Will Power is quickest at 225.399, Ryan Hunter-Reay checks in at 225.289 and Helio is third at 225.282.

On the flip side, Seb Saavedra blew up his Chevy just after taking the green flag to start his run, then Bryan Clauson, after putting together three solid laps in the high 223s, had the back end jump out on him entering turn 1 on his final lap and pancaked the wall on the left side. 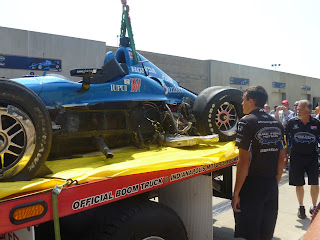 This was the damage when the car was brought back to the garage. Really too bad for the Noblesville, Ind. native who had worked his way up to the big time from the USAC ranks and was quick and clean all month.

No doubt that his Sarah Fisher Hartman Racing crew has a long night of work ahead of them. Without a backup car, this is what they have to go with.

Josef Newgarden is solid in the field at 224.677. He's either the coolest guy on the planet or is just too young to know any better. One thing for sure, the kid is a rock star. 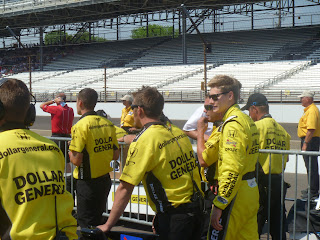 Ryan Briscoe just bumped Newgarden to the fifth spot after his 10-mile tour at 225.078.

Breaking news, TK's No. 11 KV Racing Technology car failed post-qualifying inspection. Wow. He's going to have some work to do to get into the Fast Nine.


Ana Beatriz on the course now.

James Hinchcliffe just threw down the gauntlet! In the heat of the day the Canadian dropped four laps in the No. 27 GoDaddy car at an average of 225.746. He did it the right way, taking the high line and rolling up within about a foot of the wall on exit. That's how you drive this racetrack, peeps!

To quote Indycar Advocate scribe Zachary Houghton..."he's hooked up". Good thing the "No Cheering in the Press Box" rule doesn't apply in the Social Media Garage, we all got pretty excited!

He was in great spirits at the qualifying draw last night. Stopped for a moment for a pic with yours truly. So Hinch is now a friend of 15DIM! 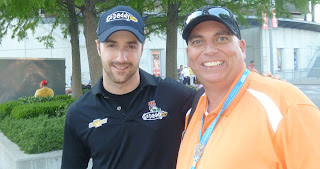 Marco just went out at 224.680, sixth fastest. Bit disappointing but we'll see how the car responds when things cool down at 4:30.

Tony Kanaan just came back out and picked up where he left off, putting himself sixth on the grid at 224.761, and impressive run considering the conditions. Turns out a weight was missing from one of his mirrors and he was 1.5 pounds underweight. Details, details.

It's an absolute bake sale here. Weather.com says it is 85 degrees here but it sure feels much hotter than yesterday as there isn't a cloud in the sky. Will update the track temperature when I hear it.

TK's run unfortunately bumped his "brother" Rubens Barrichello out of the Fast Nine. Barrichello turned his four fastest laps of the month and is solid in the field at 224.664. Slow and steady work this month got him up to speed and that was a great run in the heat for a rookie, which is what the F1 veteran still is when it comes to ovals.

Oriol Servia had the second incident of the day when he spun on the exit of turn 4, slid into the inside wall and then pinwheeled into the end of the pit wall. The car seemed OK and Dreyer & Reinbold principal Robbie Buhl said the tub is intact so they will be ready to go tomorrow. 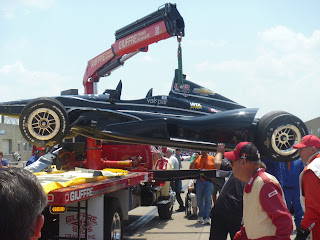 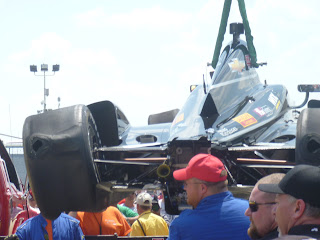 I dropped by Bryan Clauson's garage on the way out and they are hard at work. As I walked by a new Honda engine was being wheeled into the garage, and the door was quickly close.

Mike Conway's No. 14 car also failed tech, meaning  Ed Carpenter is back in the guaranteed field of 24. He had been bumped out by Kanaan.

Ran in to 1996 Indy 500 champion Buddy Lazier in the garage area. Hard as it is to believe, but this post I wrote about Buddy from April of last year is the most viewed post in the 15DIM history. 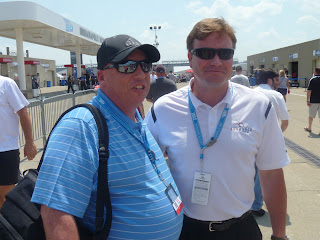 Carpenter is back out practicing and is in the 224 range. If he gets bumped again he has enough to improve his position.

Seb Saavedra is out with his new motor, just beating the gun to close the first portion of qualifying and dropped a 222.811 to bump Wade Cunningham from the top 24 and set the field of first-day qualifiers.

Ed Carpenter's month from hell continues as he had hard hit in turn 2 and left a huge debris field in his wake. He has a backup and an unassigned car carrying No. 21 so he has some fallback for tomorrow. Here is a crash scene photo.

I've noticed that wrecked cars always draw a big crowd. Very sad scene, and one like this means the owner (in this case Ed himself) has just spent a lot of money. But they will be back tomorrow at another shot at glory.

Fast Nine is next. I'm going to become a fan for the next 90 minutes and cheer Helio, Hinch and TK on to the front row. Check back when qualifying is over!