After such an awesome weekend at the Speedway and in the Social Media Garage, I woke up in my own bed this morning, looked around and thought to myself, "did that really happen?". In 33 years of coming to the track the last three days were the most memorable of my life. From when I arrived at 16th and Georgetown at 1 p.m. Friday until I packed up and headed home just after 6:30 on Sunday night, I spent a total of close to 24 hours on the grounds. Lots of time and stories to cover, but I've got a couple odds and ends that I want to throw out to keep the month moving.

*No bumping. Quite the disappointment, I must say, but we kind of knew that going in and there was plenty of drama on Saturday during the Shootout that should have appeased people. If you can't get jacked up about the pole being won by nine inches, just stay home. Maybe not the same kind of drama, but it was exciting. If people I talked to are to be believed -- and I spoke with two drivers who said they had deals but were quickly told those weren't happening -- it may have been a deal to keep Lotus in the race, and maybe in the series. The more I think about it, the more think this might be best served as it's own post later. So look for it.

*Once thing the lack of qualifying did for me. Is that it gave me a chance to check out a few things I normally don't when I am there for Time Trials. I headed over to the museum for a while and besides the nice perk of walking around in some AC for a bit it was the chance to check it out again because since the last time I was there after the race a year ago it was completely set up for the past winning cars collection, which was awesome. The cars were set up in order of the year they won and you could totally see the evolution of the automobile at the Speedway.

This year the smaller room (to the left as you enter the main museum floor) was featuring cars of the late 60s and early 70s. They had one of the Granatelli "wedge" cars from 1968, both of Al Unser's 1970-71 Johnny Lightning Special winning cars and several cars driven from 1971-73. Talk about the evolution of the cars! It's amazing to see how far the cars came in a short time, to go from roadsters in, say, 1964 to the rear-engine, huge bolted on wings and sidepods less than 10 years later.

Of course the main reason I headed over there was to see the No. 98 car. Lots of emotion at seeing it again. It's actually the restored version since Wade Cunningham wrecked the original at Texas last year, but it looks just as it did the day Dan Wheldon won the race a year ago.

I also checked out the photo store on the second floor for the first time. I was only there a few minutes but saw some great pictures and reference books. Later on I bought some photos in another shop: a picture of Wheldon hugging his two spotters after last year's race, Bill Vukovich's official photo after winning in 1954, and Rick Mears' victory photo in 1979. I chose that one since it was the first year I went to the Speedway.

But back to the museum. I hope someday they have expansion in mind. I know that they have a lot of items to display, but if you only get there once every year or two you miss a lot of things. I'd love to see the museum expanded so they could have more permanent displays, and a lot more interactive things so that kids could get more involved.

*Pippa Mann. Pippa came in and hung out with us in the Social Media Garage on both Saturday and Sunday, and was a blast to be around. From where I come from, we refer to people like her as "good people". Very nice, very polite and an interesting person to talk to. No doubt she was hugely disappointed by not getting a ride, but she didn't let that get in the way of spending time talking with us and with the fans. I will leave it to the rest of the guys, but if you want to consider her an "honorary Social Media Garage blogger", it's OK by me.

*Speaking of the Garage. First, let me get a little housekeeping out of the way. The garage is actually located in the public area of IMS, south of the Pagoda just off the plaza. Apparently there was some confusion on a few people that thought it was in the garage area and you needed access to get in. Nope, just show up, it's open to everyone and for a small space has lots to do. 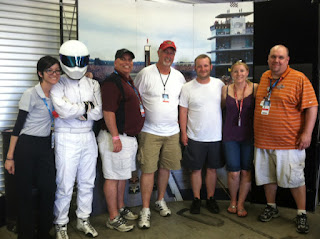 By the way, here is a photo of the cast of characters I hung out with. From the left is IMS staffer Jamie Metcalfe, The Stig (whose real identity is a mystery), yours truly, Mark Wilkinson (Newtrackrecord), Eric Hall (Anotherindycarblog), Pippa Mann (no intro needed) and Zach Houghton (Indycaradvocate). If you can't tell from the photo, a good time was had by all.

That out of the way, I appreciate what the folks at IMS did for us over the weekend and giving us the opportunity to do something so unique. Along with a bit of swag (the Silver Badge was awesome) we were giving everything we needed to do what we do.

What I also appreciated was more than a few members of the IMS staff came and welcomed us and welcomed our input from everything to improving the Social Media Garage to what we feel it would take to attract more fans. Chief Information Officer Rhonda Winter stopped in and talked to us every day, while Mark Dill, the IMS Vice President of Marketing, stopped in for a visit on Sunday. He spent about 15 minutes with us and gave us his business card and told us to keep in touch with him with our thoughts and ideas.

IndyCar CEO Randy Bernard stopped by outside the garage on Sunday as well. Darn, I wish he had come in as I had my tape recorder ready!

It's nice to be wanted and to feel like when you offer an opinion, that opinion matters.

Oh yeah, and there were also sweet iRacing simulators in there offering laps of the Speedway. My best lap was 41.553 seconds, which put me in the 216.5 mph range. From what I heard the best lap was in the 40.8 second range so I wasn't far off. Maybe I'll practice some at home and try again when I am back on Sunday.

I should be at the garage Sunday morning, and a tweetup is tentatively scheduled at 9:30 a.m. So come by and say hello.