As I posted on Twitter right after the race ended:

It was almost like the field of 33 drivers walked up to the mic, said "we just put on the best race in the universe today", and walked away. Yeah, it was that good.

Where to begin? With the 68 lead changes? The fastest Indy 500 in history? The incredible racing throughout the field? The coronation of Tony Kanaan as the official Indy 500 People's Champion?

I was going to list some of the numerous records set today, but there are so many I'm just going to refer to the IndyCar website. Check it out. 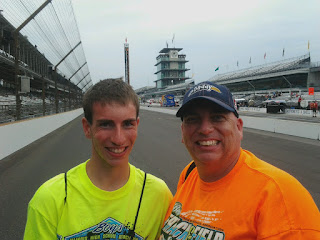 So that I don't write an epic post, I'm just going to go through the Top 10 and a few other story lines, and my views from the Southwest Vista. For the third straight year, Matt accompanied me to the race. So he's seen Dan Wheldon win on the last lap, watched Dario Franchitti win his third while Takuma Sato crashed almost right in front of us, and TK win on one of the most historic days the Speedway has ever seen. The kid's spoiled, I'm telling ya.

Winner -- Tony Kanaan. Am I really, truly able to type his name in this space? Yes. Wow, what a run by TK. When he quickly moved from his P12 starting position to near the front of the field at the start of the race, you had the feeling right then it was his day. I've been going to the Indianapolis Motor Speedway for 34 years now, and I have never heard cheers like I did today. Last year I said if the fans could will a driver to a win, TK would have a couple of Borg-Warners by now. What we love about Tony is that he goes out and races hard, and he pours his heart and soul into the car every time he drives it. He did that today and it finally, FINALLY paid off for him. I don't think there is anyone in the racing world that isn't happy for him today.

Runner-up -- Carlos Munoz. The 21-year-old Colombian started second and finished second. I have to admit when Andretti Autosport announced he would be driving a car this year, I pretty much figured this year would be for experience and that maybe he would be a factor someday down the road. Instead, he has driven well beyond his years all month long, and was impressive in this one, driving clean but at the same time giving no quarter. An obvious choice for Rookie of the Year.

3rd -- Ryan Hunter-Reay. As expected, Andretti Autosport was the dominant team on Sunday, putting two drivers on the podium and three in the top four. The only AA car who didn't perform well was James Hinchcliffe, who looked lost all day and finally fell to 21st in the final classification. Hunter-Reay had the misfortune of being as sitting duck in the lead on the final restart, and had the race gone to the end would've probably teamed up with TK, Munoz and Marco Andretti for a four-wide finish similar to Friday's Indy Lights race. Still, he's further proving that last year was no fluke. I think he is driving even better.

4th -- Marco Andretti. Marco was happy for TK but visibly disappointed after leading 31 laps and at times having the car that could do almost anything. On the flip side, he is the new points leader and his maturation process continues. In this era where the reliability of the cars is close to impeccable, he will get more opportunities to win and don't forget, he's still only 26. He's going to get a lot more chances.

5th -- Justin Wilson. The highest-finishing Honda in the field, Wilson now has three top-7 finishes in his last four runs at the 500. Like Oriol Servia placing fourth last year, Wilson snuck up on the field Sunday with a solid, workmanlike effort. Wilson also had the fastest lap of the race at 226.9 mph.

6th -- Helio Castroneves. The last time two three-time winners drove in the 500 (1987), Al Unser Sr. took a Penske car and rolled to his fourth win. Helio didn't have that same luck Sunday, but always seemed to be in the hunt and led a lap in a fantastic move where he went from fourth to first in on fell swoop. Since Helio captured his third win in 2009, he has inexplicably not been a huge factor on race day. But like Marco, he can find the silver lining that he brought the car back in one piece and heads to Detroit's twinbill next weekend third in the standings.

7th -- AJ Allmendinger. With each good finish, I hope more and more that this guy finds a way to stay in IndyCar. Taking on a big oval for the first time in his career, he fell back at the start of the race but gained confidence with each lap and by the midway point of the race was sticking his nose in there and taking people on. He had to pit off-sequence when a part of his seat belt came loose, which put him out of cycle with the leaders, but with the long green he was able to battle back and was in the mix late. Still, leading 23 laps in your debut for the Captain is a good day and usually gets you an invite back.

8th -- Simon Pagenaud. See Wilson, Justin. Pagenaud started 21st but was pretty good in traffic and just methodically worked his way up into the fight. While he was never a factor from the front of the field, Sam Schmidt should be happy to see him recover from some struggles earlier in the season.

9th -- Charlie Kimball. Kimball missed the Saturday pre-race activities with the flu, and just a few laps into the race his car sounded just as sick. I don't know what they did to fix his problems, but after spending a lot of time by himself just logging laps, the field came back to him and he started moving up. Impressive run. Raise your hand if you had Kimball as the highest finishing Ganassi car in the field.

10th -- Ed Carpenter. Ed was hooked up to start the race, leading 34 laps (a race high) early. Then he started dropping like a stone, and while his team tried to say he was settling in for the long haul, his in-car camera showed his right hand getting pretty high when he was turning, which is the sign of a car that refuses to turn. This was Carpenter's best chance to win the 500, and you think he will have some more. He will still win an oval race (or two) this year.

Rookies. Although there were only four in the field, they all represented themselves well. I've already documented Munoz' and Dinger's days, but a little further back in the field Tristan Vautier finished on the lead lap in P16 and Conor Daly was two laps down in P22. What Munoz and Dinger did were a bonus, if a rookie logs a ton of laps, stays out of trouble and picks up some valuable experience, that's all you can ask.

133 laps. Since they began keeping records of separate green/caution laps in 1976, the 133 lap stretch between laps 60-194 is the longest green flag run they have ever had here. Think about it, 133 laps is 332.5 miles, or roughly the distance between Indy and Madison, Wisc. And at the pace the cars were going, the cranked those laps out in about 90-95 minutes, representing probably the most intense 90-95 minutes they have ever experienced in a race car. It wasn't like this was a single-file parade, guys (and ladies) were having to defend their positions lap after lap without having the chance to take a mental break of sorts during a caution. That stretch was a real testament of the skill of the drivers in the IndyCar series.

Honda. As the day went on I heard faint sounds of a guitar strumming and the strains of Kumbaya wafting over the Speedway. Unlike last year when the Hondas came alive on race day, it just didn't happen this time. Chevy took seven of the top 10 spots and Honda led just eight laps, with James Jakes leading the brigade with five. Honda puts a lot into winning the 500, so there are probably a lot of people that won't be sleeping well tonight.

Finishing under caution. For the third straight year, the race finished under yellow, and the green/white/checker (or wrecker) debate was resurrected anew. A couple of things here: if you were left with a "bad taste in your mouth" (as a caller to Kevin Lee's show said he was afterwards) after 68 lead changes and some of the best racing the Speedway has ever seen, you need to either lower your expectations of happiness or find another sport to follow.

Was I a bit disappointed that the race didn't go down to a final, last lap knife fight? Hell yeah, but at the same time, I believe in the integrity of the race distance. The rules say the person who covers 500 miles first, wins. It doesn't say "let's keep trying until we get a finish we are happy with", it's pretty simple. I'd rather see a red flag than a G/W/W finish, and while many may think that is splitting hairs, I don't ever want to see an IndyCar race go beyond its scheduled distance. Either way, 500 miles is 500 miles, and it should be kept that way.

And besides, let's get something straight and clear. While the previous two years also finished under yellow, the G/W/W would not have applied either time as the leader of the race had taken the white flag. So let's put this discussion to bed, shall we? I don't know about you, but the last three years haven't left me disappointed. At. All.

So another 500 is in the books. When the day started, I was hoping to see a repeat of last year's race, but this year's just blew it away. Is the bar getting set too high? Who knows, but ever time I watch the DW12 race on an oval, it gets prettier by the day. The other two Triple Crown races should be awesome, but first, it's on to Belle Isle!
Posted by Mike Knapp at 10:37 PM