I've been fortunate to have traveled with my wife Darcy to some really cool places in the last couple of years, but if you had told me I would ever have made it to Monaco, I wouldn't have believed you!

Yet, here we are! Darcy's boss was a panelist for the Ernst/Young World Entrepreneur of the Year conference, and he wanted Darcy to come so I tagged along. It's been a fun couple of days here, Monaco is a beautiful city, and while I've seen lots of wealthy, beautiful people, and tons of amazing yachts and supercars, I've also discovered that it is full of nice, everyday people too.

Of course, I was excited about the opportunity to check out the course used for the Monaco Grand Prix. First run in 1929, the race uses the sometimes narrow streets around town, and while the race is mostly a parade of cars because it's so hard to pass here, it's location and history gives it the status of one of the world's most famous and prestigious races -- and rightfully so.

I actually lapped the 2.07-mile course four times! Once as a track walk, twice as a runner and another time later in the day when Darcy and I went on a leisurely stroll. 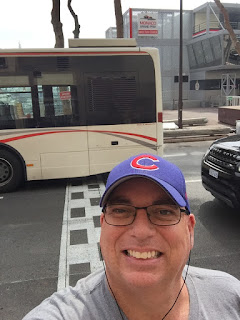 I discovered that it is a pretty interesting course. Again, very narrow, with most of the streets averaging about 8-12 paces across, but one thing I never really knew about it was the massive elevation changes. Watching the race on TV or checking it out on YouTube, there really isn't justice given to how extreme they really are.

So, although I started from the Fairmont Hotel where we are staying and jumped onto the course at the famous Fairmont Hairpin, we'll get started with my selfie at the start/finish line.

The race starts on one of the busier streets in town, one which is lined with restaurants and shops. What is so amazing to me is how they are able to squeeze grandstands and stuff along this street, much like the start/finish line in Singapore.

Once the drivers take the green, the course begins an uphill ascent 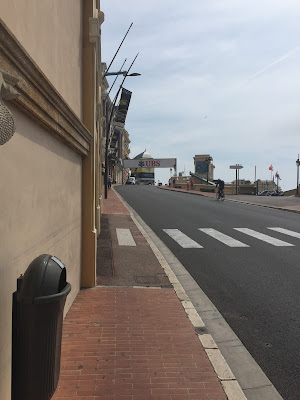 that continues until the cars reach the Hotel de Paris and the Monte Carlo casino. In just about one kilometer, the course goes up almost 150 feet! I'll tell you what, running up that hill was a beast!

Speaking of running, last month I ran the Indy Mini marathon, which includes a lap of the Speedway. My total time to run around the track was 28:03, which I was really happy with. My lap here in Monaco was 24 minutes, so you can tell the difference the big hill makes!

Does this photo show a little bit as to how steep the hill is? Crazy.

Once at the top of the hill, the hotel and casino await. It's super narrow up there as the cars go through a little bit of a roundabout in front of the hotel. Both buildings are so beautiful, I've been looking at photos and old videos from the race and it's kind of 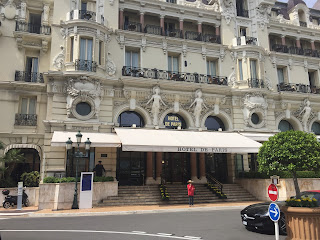 cool how you can superimpose either a car from, say, 50 years ago, and a current one racing by the hotel and the view is really similar.

Actually, if you are a fan of the movie Grand Prix, as I am, the scene where Stoddard's wife wakes up and runs to the balcony of her room is at the hotel right next to the Hotel de Paris at the Hermitage.

You can't see it in this photo, but the hotel is undergoing a big renovation. Across the way at the casino, they were filming a commercial, and a camera crew was repeatedly shooting three people walking across the street and into the casino. That was kind of cool. 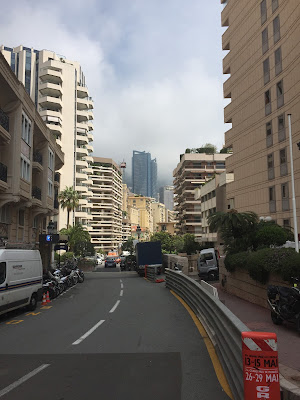 Once through the roundabout, the cars start to go back downhill again, and this one is even steeper than the first as they wind their way back towards the Mediterranean Sea. The street is still crazy narrow and drops into a hard right-hander that takes the driver by the Fairmont Hairpin.

Imagine busting it down this street at about 100 miles an hour!

As you can see, there is still a lot of guardrail up, but it is being removed bit by bit ever day. They took the guardrail down by the Fairmont on Thursday, and the teardown of the big grandstands by the harbor is an ongoing project that will probably take another couple of weeks.

So the cars head down this street and bang a right and just keep going downhill. That takes them to the hairpin. Referencing Grand Prix again, I noticed in the movie that the Fairmont hadn't been constructed at the time 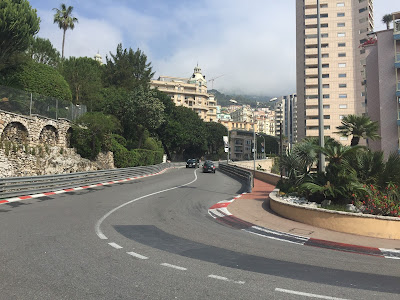 and there was just a set of grandstands there. Now the hotel has such a great view that the rooms that face the race course are in high demand.

Actually, the rooms that are good for viewing have a sign on them, which I'll post at the bottom. I peeked into one of those rooms when housekeeping had a door open, and they are pretty swanky too.

This photo is looking up the street, and the cars would be coming towards you in the Grand Prix. This corner is super slow, with the cars going around it at 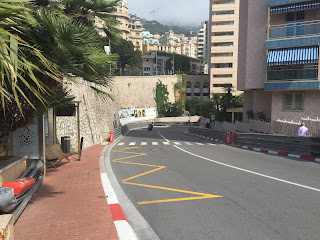 30-40 miles per hour. It's kind of interesting to be around there and to see and hear supercars going around that hairpin. I think the people driving those cars like to have a little bit of a feeling they are F1 drivers.

Here is the exit of the hairpin, not again the steep elevation loss. From where I took this picture, we are probably about 75 feet above sea level, and they will drop another 60 feet or so in the 400 meters from here.

It's pretty easy to follow the course from here. It's 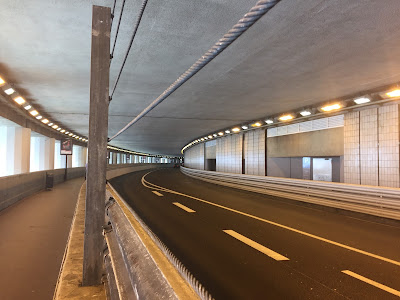 basically you drive to the Mediterranean and turn right! That of course turns into the famous tunnel. The road through the tunnel is about as wide as the course will get, but it narrows quickly at the exit.

Three things make that tunnel tough: 1) the quick adjustment your eyes have to make coming out of the tunnel, 2) the narrowing of the street and 3) there's still more downhill to go!

I drove through that tunnel in our rental car, and even at 40-50 mph you still get a sensation of what it is like for the 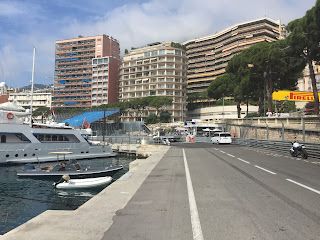 drivers. In such a tight space I bet it looks pretty spectacular to see them drive through it.

The exit of the tunnel gives the drivers their first look at the harbor. Coming out of the tunnel, they head a bit downhill until a little kink turns them closer to the harbor. Of course, since that is the largest and flattest place in town, that is where the huge grandstands are put up.

I also drove through that area, and it is narrow and really twisty. What is funny is that to the driver's right there are a bunch of shops and cafes. Unfortunately 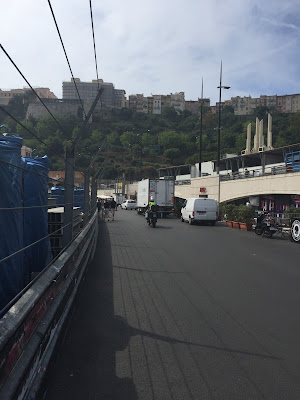 the guardrails were down in front of those establishments, so I don't know how close the cars get to them.

Even though much of them were taken down, the size of the grandstands there were pretty awesome. I can only imagine what it looks like to drive through there when they are full.

I'll throw a few more images down at the bottom, but I kind of like this one because you can see the shops and everything.

At this point, the lap is just about over! Near those clumps of trees is a quick right turn, uphill about 100 meters, and then another quick right that takes the cars onto the main straight and back towards the start finish line.

All in all, walking the course was a really interesting and enjoyable experience. One thing that really struck me is 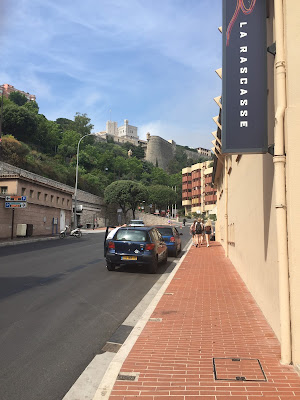 that even though the course is slow, it is very technical and difficult to drive. Much like IMS, this race has pretty much run on the same course since the race began in 1929.

Back then, the cars were probably a little bit bigger, but they didn't go nearly as fast. Now, although components like suspensions and brakes are better, it's still a physical track for the drivers since there is so much shifting and g-forces going on.

And of course, I gave a lot of thought to the history of the race, and how drivers like Alberto Ascari, Juan Fangio, Jim Clark, Graham Hill, Mario Andretti and so many others had driven those streets. But the one person I thought about a lot as I was walking was Ayrton Senna. Senna won the race six times and had several of the best drives of his career at Monaco.

In fact, his career was kickstarted here as his second place finish in 1985, and there are many epic YouTube 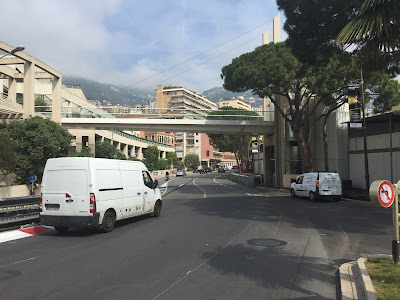 videos of him driving laps around the circuit.

What he did here was a large part of his legend.

Well, I hope you enjoyed our track walk. I've now been to three F1 tracks (Monza, Singapore, Monaco) and my next goal is to see a race at any of those sites, especially Monza and Monaco. Hopefully someday! 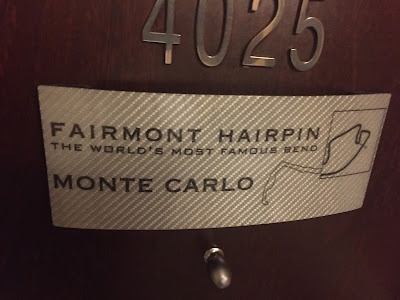 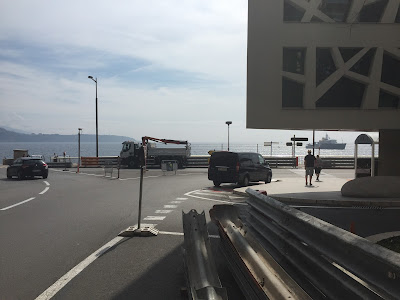 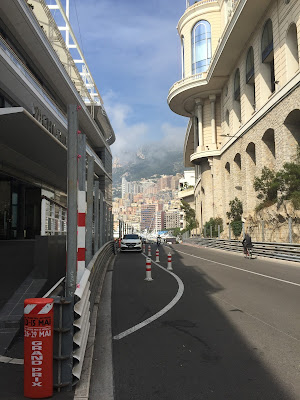 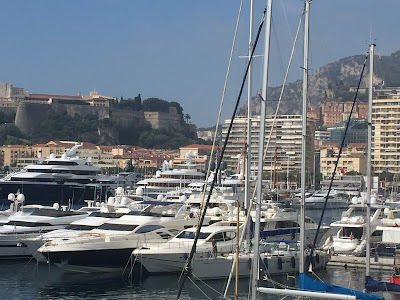 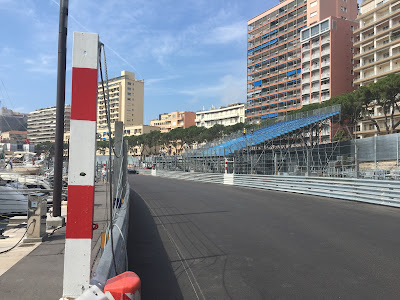 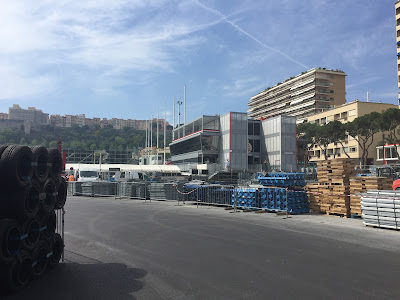 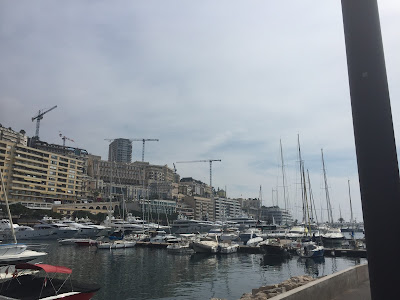 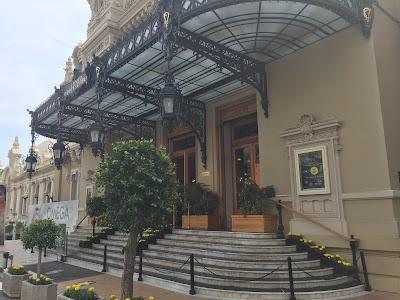 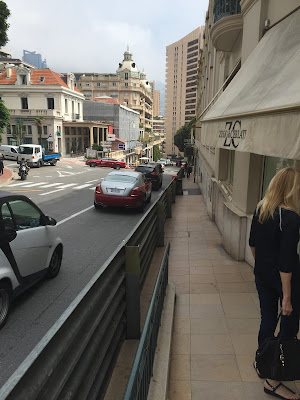 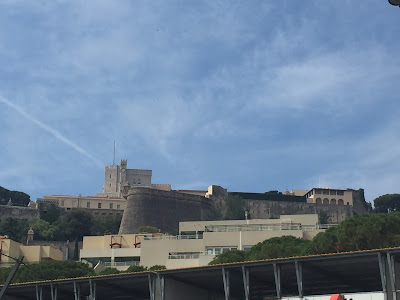 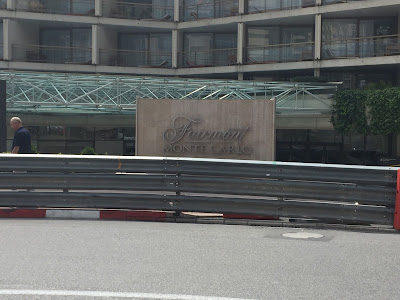 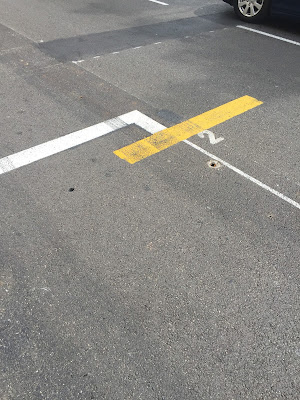 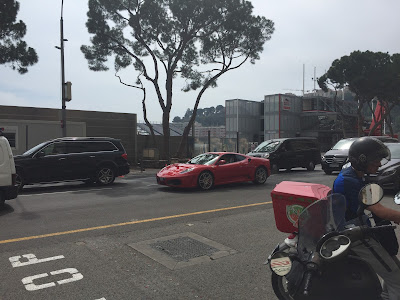 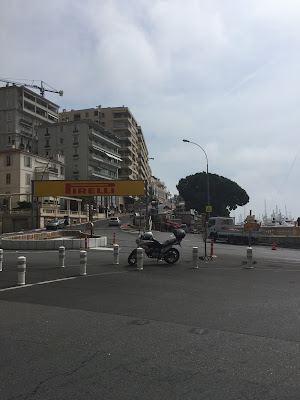