St. Petersburg, Fla. -- After a crazy first practice session that saw Marco Andretti with the fastest time, Honda powering eight of the 10 fastest cars, and five Chevys sitting in the bottom eight, order was restored in the afternoon session as teams geared up for Saturday qualifying at the Firestone Grand Prix of St. Pete.

Thanks to an off-season switch to Honda by Chip Ganassi Racing, Honda place six cars in the Top 8, and while there were a lot of surprises in the morning session, the names on the top of the speed chart later in the day were more than a bit familiar. 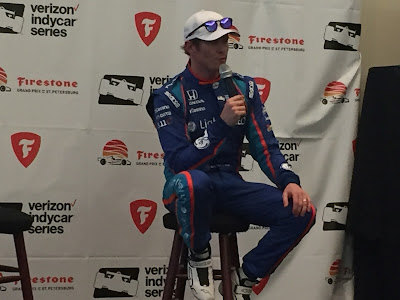 The only driver who managed to break up the Ganassi monopoly was Team Penske's Will Power, who was second-quick at (1:02.8146). St. Pete resident Sebastien Bourdais, driving on his "home track", was fifth-best (1:02.9056) in his return to Dale Coyne Racing.

With all of the teams on different strategies and agendas as far as what they wanted to accomplish Friday, Dixon wasn't interested in "winning Friday", instead he and the team want to focus on building through the weekend.

"Friday doesn't pay anything and doesn't mean anything," Dixon said. "Hopefully we can continue to improve the car for tomorrow and the race on Sunday. (Saturday) should be interesting once everyone turns it up."

Power rebounded quickly from a crash in Turn 10 in the first session, which was a bit of deja vu as he crashed in the same place in the same session a year ago. That incident eventually led to Power missing the race, but this time he just suffered damage to the right rear of the car and will be in the mix to win for the fourth time on the streets of St. Pete.

Despite the speed chart looking like Honda "dominated" the session, the reality is that it was more parity than anything else. As is usually the case in IndyCar less than one second separated Dixon from Spencer Pigot, who was 18th on the grid in 1:03.4909.


"The grid looks pretty nicely mixed up with Honda and Chevy, which is great for competition," Power said. "It could make for a really competitive year."

IndyCar qualifying will begin at 2:55 this afternoon.

Track changes: Much of the circuit was repaved since last year's race, with the rest of the repaving scheduled between now and 2018, and the changes were met with positive reviews

"The track is nice and smooth, it’s a nicely done street course," Power said. "It’s kind of set the standard for what street courses should be.

"We have a lot of lanes (now) to pass on. The bodykits have made the racing tougher, and closer. But the tires degrade quickly, which makes for good racing. I think we’ll have a good race."

The teams were thrown for a bit of a loop Friday morning when they arrived at the track to find that Turn 3 had been changed overnight as the result of several incidents in support series practice sessions the night before. About 180 feet of curbing was added to the corner to round it off in an effort to keep cars from impacting the wall on exit.

Dixon was very complimentary of the effort made to have the turn ready by Friday morning, and said the change should help some of the other series racing here, For the IndyCar machines, it narrowed up the corner and could take someone by surprise.

"It's different through Turn 3 because it used to be a flat corner," Dixon said. "(The change) was made more for the car with less downforce, but it made the corner tricky, and it's something that could catch you out at any moment."

Looking long term: After a New York Times piece ran Friday that pointed out the postivie growth of the series IndyCar announced Friday that long-term contracts had been secured with all four series manufacturers: Dallara, Firestone, Chevy and Honda.

That type of commitment had been missing for quite some time in open wheel racing, and both Power and Dixon, whose careers overlap both the split and unified series era, feel that securing such deals will only benefit open wheel racing's future.

"You can see the momentum and the continuity (building)," Power said. "The drivers, teams and manufacturers shows strength in the series. There was once a time where we had different drivers every year, but now we have the same drivers, the same teams, and it’s heading in a great direction."

Dixon agreed, but like many he hopes a third engine manufacturer could be added to the mix as well.

"Kudos to everyone in the series and Jay( Frye) as well," Dixon said. "It shows that the manufacturers know that this is the right place to be. As we have all spoken about, if we can get an addition of one more (OEM) it will be ideal, and hopefully that will happen."