As I sit in my kitchen typing this out and reflecting on the last couple of weeks, the same thought goes through my mind over and over. 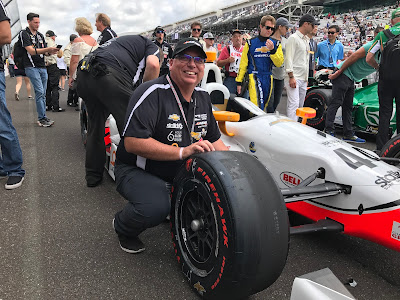 As many of you know, I worked for Lazier Racing Partners on Buddy Lazier's 500 effort. It was an incredible experience to say the least, and a post on that will be forthcoming. I'm very appreciative of the people who helped make that happen, and forever in their debt. Hopefully if all goes well and Buddy's back in the car next year I will be a part of a fun group of people again.

As for the race? It went as advertised...again. I watched the first 60 laps of the race in the pits then went to the Southwest Vista. and watched the rest with Matt and Kevin as part of our usual traditions. This was my 19th 500, it was Matt's seventh (already!) and Kevin's third.

The race was what we have become accustomed to over the last few years: lots of passing, several lead changes and a lot of late-race drama. So, as usual, let's go through the Top 10 and some other notables.

Winner -- Takuma Sato. Taku's mantra of "No attack, no chance" has not always served him well, but when you are in the mix to win the Indianapolis 500 in the closing laps, it's a good one to have. Five years and one day after trying to pass Dario Franchitti for the win but instead hitting the Turn 1 wall, Sato made his Lap 195 pass of Helio Castroneves to stick and held on to become the first Asian driver to win the 500. Like Alexander Rossi last year, Sato's win came as a bit of a surprise given his best 500 finish before this year was 13th, but like Rossi, he will prove to be a popular champion and a great representative of the 500.

2nd -- Helio Castroneves. When Castroneves moved to the point with six laps to go, it seemed like he was on his way to picking up his fourth 500 win. The universe had other plans, of course, but all-in-all the 42-year-old drove a phenomenal race, overcoming a drive-through penalty and working his way up from his 19th starting position to once again find his way into the mix at the end. Helio now has three runner-up finishes to go with his three wins and will always be a factor at Indy as long as he his in a Penske.

3rd -- Ed Jones. OK, let's get this out of the way -- he got absolutely stiffed out of the Rookie of the Year award. But truthfully, Ed's driven like anything but a rookie since his car rolled off the track at St. Pete. This is his first podium and third Top 10 finish in six races so far this season, and he gave Dale Coyne Racing its best-ever finish at Indianapolis. Just 22 years old, he looks as if he's ready to stick around for a while.

4th -- Max Chilton. Quick, who led the most laps in Sunday's race? It was Chilton, who paced the field for 50 laps, or one-quarter of the race's distance. This may have been the best car he ever had and was certainly the best drive of his career.

5th -- Tony Kanaan. As always, the 2013 champ drew the biggest cheers all day (and month) and was his usual entertaining self during the race. He paced the field from Laps 6-27 and was in the mix all day long. This was the sixth straight year he led a lap and he now has eight Top 5 finishes in 16 starts.

6th -- Juan Pablo Montoya. This race typically brings out the best in JPM, but he was unusually quiet this year. He wasn't the only one, though, as the parity between the top 20 cars or so was so tight it was difficult for many to move up, and having so many yellows in the last 80 laps (7 yellows for 31 laps) meant there weren't any long runs like we have seen in the past where drivers have been able to make moves.

7th -- Alexander Rossi. The defending champ drove a great race, running at or near the front all day, but got shuffled back on his last pit stop due to a fueling issue. I thought for much of the race he had the best car, and with this performance he certainly backed up his win from last year.

8th -- Marco Andretti. Certainly not the finish or effort he was looking for, as an unscheduled pit stop put him back in the field and he couldn't recover. It's hard to believe that this was his 12th 500, I'm convinced he is going to win someday, but then again, I felt the same way about his dad, too.

9th -- Gabby Chaves. Gabby is a solid driver who always makes the most of his equipment. He drove a great race on Sunday -- stayed out of trouble, stayed on the lead lap and took advantage of the mistakes of others. It's tough, in today's IndyCar there are more capable drivers than seats, but I'd like to see what he could do in a really decent car.

10th -- Carlos Munoz. We didn't get the typical, drive to the grass and use every inch of pavement type of drive that we know and love from Carlos, but he did a great job moving up from his 24th starting spot, especially falling a lap down at one point. A great stat is that after Sunday he has finished the race on the lead lap in all five of his starts, making him 1,000/1,000 in laps completed.

20th -- James Davison. There was a lot of shade thrown to Dale Coyne Racing when Davison was chosen as Sebastien Bourdais' replacement after Seb's brutal crash in qualifying, but after starting 33rd he was up there in the mix until being involved in a four-car crash on Lap 184. We can talk all day long about who "deserves" a ride and who doesn't, but the only thing that matters is what you do when given the opportunity, and he stepped up and got the job done.

24th -- Fernando Alonso. I was a little shocked to open up the box score and find there were 32 other drivers in the race -- how'd that happen? All joking aside, Alonso came here to race and did a pretty amazing job, leading four times for 27 laps and was in the mix for the win until his Honda blew up on the front straight with 50 miles to go. I hope he comes back next year. 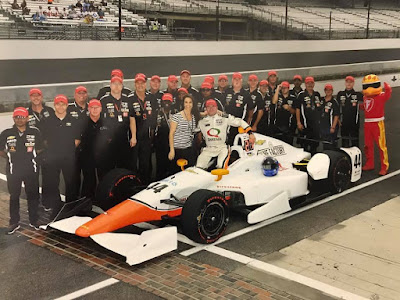 29th -- Buddy Lazier. This team was near and dear to my heart this month, of course. A crazy set of circumstances led to my getting the chance to work with this group, and it couldn't have been a better experience. Leading up to the race, everything was going so smoothly, and the team truly felt we had a good, competitive car. Losing two laps after running out of fuel before the first pit stop set us back, but Buddy only lost one lap over the next 250 miles before crashing in Turn 2 on lap 122. I'll get more into things with a separate blog post here over the next week or so, but I do want to thank Mitch Davis, Corey Krause and Bruce Bohlander for such a wonderful opportunity.

32nd -- Scott Dixon. What an up and down month for Scotty D. Wins the pole, gets robbed at Taco Bell, then is running great in the race before running into Jay Howard's disabled car and flying several hundred feet into the South Chute inside catch fence in what my boys called the scariest thing they had ever seen. Call these cars whatever you want, and the DW12 has a lot of detractors, but the thing is an absolute tank when it comes to safety. The fact that Dixon climbed out of the car and walked away is such a testament to the safety of the car and the series.

Just when you think you see a great race, like we thought we had each year from 2011-16, the next edition is always better. This year's race was, in one word, incredible. The Indianapolis Motor Speedway and the 33 drivers put on a show that we will always remember.