The Best of the 2019 IndyCar Season 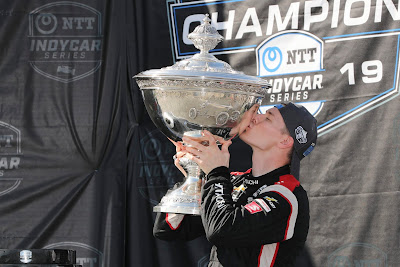 Last Friday, I wrote about some of the bigger stories of the year in the NTT IndyCar Series in 2019, and today I'm going to focus on what happened on the track this past season.

As I've done several times in the past, I'm going to highlight some of the drivers and performances that we saw this past year, sort of an awards show, if you will. We definitely have plenty to work with this year, so let's get started.

Driver of the Year: Josef Newgarden. In the past, I haven't necessarily given this award to the driver who won the championship, but this year Newgarden is a worthy recipient. Newgarden started off the year with a win at St. Pete, then finished on the podium in three of the first four races. He later added three more wins (Detroit 1, Texas and Iowa) and did what he needed to do over the final few races to keep himself on top of the points standings. With only three finishes outside of the Top 10 all year, Newgarden did exactly what you need to do to win an IndyCar title: win a lot, and when you don't win, finish near the front.

Drive of the Year: Alexander Rossi and Simon Pagenaud. With the rules the way they are and competition at the level it is, it's certainly hard to dominate a race, but that happened three times this year. Rossi won the pole at both Long Beach and Road America, and ran away with both races, winning by 20 and 28 seconds, respectively. Pagenaud, meanwhile, dominated the entire weekend in Toronto, running quickest in the practice sessions, winning the pole and running away with the race win.

Race of the Year: Indianapolis 500. Come on, do you really think it would be anything else? Twenty-nine lead changes among nine drivers, 300,000-plus fans, the prediction of rain that eventually didn't happen. It was the greatest race on the planet in 2019, and if you think I'm wrong, prove it. In the end, Pagenaud made a pass in Turn 3 of the penultimate lap, and went on to his first win while sweeping the Month of May.

Let's relive it, shall we?

Coolest Race of the Year: Iowa. OK, there was nothing super spectacular on paper about this race. Newgarden led 245 of the 300 laps to win his fourth and final race of the year. But still, it may have been the coolest race I've ever watched. Rain and lightning meant the race didn't start until almost midnight, then experienced another red flag for rain. By the time the race ended it was almost 2 a.m. local time. Being there, it was so cool to experience something like that, and in the end, this race belonged to the fans that stayed with it until the end.

Rookie of the Year: Colton Herta. With all due respect to the official ROY, Felix Rosenqvist, Herta was the best of a very solid rookie class that included Rosenqvist, Santino Ferrucci and Marcus Ericcson. Herta, at 18 years and 259 days, became the youngest winner in IndyCar history when he took the checkered flag at Circuit of the Americas, then bookended that with a win at Laguna Seca to finish off the year. He eventually captured two wins and three poles on the year and, with his move to Andretti Autosport for 2020, showed he was one of the rising stars in the series for next year and beyond.

Comeback Driver of the Year: Simon Pagenaud. After winning the IndyCar championship in 2016, Pagenaud went through a sort of "slump", winning just two races combined in 2017-18. By the time the circus reached Long Beach in April, many were speculating that Pagenaud was in his final season as a part of Team Penske. Those people hadn't been paying attention, though, because Pagenaud was racing as hard as he ever had in his career, he just didn't have the results to show for it. Confidently defiant, Pagenaud took on Scott Dixon in the rain at the Indy GP in early May, and came away with the win with a late-race pass, then won the pole and the race at the Indianapolis 500. From his win at Toronto until the end of the season, Pagenaud never finished worse than P7 and finished the season just 25 points back of Newgarden for the series championship.

The start of the 2020 season is still a long way off, but we're getting closer. It's been 10 weeks since the season finished, and we have 15 weeks to go until St. Pete. Hopefully next season will be just as exciting, both on and off the track, as 2019 was.