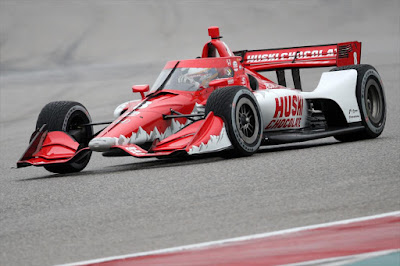 Separated by a couple of years in age and with different career arcs, Swedish drivers Marcus Ericsson and Felix Rosenqvist didn’t have a lot of interaction on the track while they were building their careers in the European junior ranks.

That changed last year when both entered the IndyCar series for their rookie campaigns in 2019, and now has moved to another level as they are now teammates at Chip Ganassi Racing.

With their rookie seasons now behind them, they are both looking to make an impact with CGR as the season opens Saturday at Texas Motor Speedway.

For Rosenqvist, all 2019 was missing was a victory, as he won the pole at the Indy GP, picked up two podiums, including one at Mid-Ohio where he was a pass away from now-teammate Scott Dixon from winning, and finished sixth in points. He also finished five points ahead of Colton Herta to capture the series’ Rookie of the Year title.

Rosenqvist has spent his entire career trotting the globe and driving anything that has wheels, so he was well-known among most IndyCar fans, especially given his stint driving Indy Lights in 2013. If he had one Achilles heel last season it was on ovals, where he had an average finish of P17.

Some of that wasn’t his fault, having been caught up in accidents both at the Indy 500 and Pocono, but the truth is even when he did finish races, his best effort was a P11 at Gateway.

Ovals are definitely a point of emphasis for him this season.

“I think going to Texas is going to be cool because my biggest improving thing from last year is definitely ovals,” Rosenqvist told the media during an IndyCar Zoom call. “That’s been a thing I’ve been thinking mostly about during the off-season. I think I have more to gain than anything else.

“Starting off in Texas, it’s going to be a nice feeling to see how much of that work has paid off, where we sort of stand compared to the others, especially on the ovals and superspeedways straight off the bat in the beginning of the year. Yeah, it’s going to be fun.”

Ericcson’s 2019 season was a little less successful as he was making the switch to IndyCar after making a total of 97 starts in Formula 1. Driving for Arrow Schmidt Peterson Motorsports, he managed a podium at Detroit 2, but his only other Top 10 finishes came in the form of P7 results at Barber and Texas. He missed the race at Portland due to one final Formula 1 reserve driver commitment and finished 17th in the final standings.

“For me everything was new last year,” Ericsson said. “It was a complete new series. All the tracks were new, the cars, everything. It was a very steep learning curve for me. I felt throughout the year I was progressing, sort of getting into it more and more.

“I think one of the biggest things that I found with IndyCar is just the way you have to be complete as a driver because we go to so many different types of tracks. It’s everything from short ovals to superspeedways to street tracks to sweeping road courses. You need to be a complete driver to be competitive in this series.

“The competition in this series is extremely high, one small mistake and you’re down towards the bottom of the field. You need to get everything right, get the car set up well, then really maximize in qualifying and the race.”

Changing teams has been a new challenge, but he’s tried to use the longer break to get more familiar with life at CGR and getting up to speed with one of the most successful teams in IndyCar history.

“It’s been a long and strange off-season already, a long off-season in IndyCar,” Ericsson said. We were ready in St. Pete, but it was called off in the last minute, (after that) it’s about preparing yourself even more.

Both drivers were very active on iRacing during the spring, participating in the IndyCar iRacing Challenge. Ericcson nearly won at the final race at Indianapolis, using a courageous move down the backstretch and into Turn 3 to move into the point, only to be wrecked by Pato O’Ward one corner later.

The experience wasn’t for naught, though, as it gave Ericsson even more of an opportunity to work with the people who will be up on the box for him this season.

“It’s been really good this extra time,” Ericsson said, “especially the iRacing Series has been great for me to get that relationship started with my engineer, Brad Goldberg and my spotter Bruce (Kempton). We’ve already started working in a racing environment. It feels like we definitely have started that process so we can continue that now when we get to the racetrack for real. That’s been really good and really useful.”

Before any season begins, there is plenty of optimism, of course, but there is also plenty of excitement. The IndyCar season finished last September and last hosted an oval race at Gateway back in August, so just getting back in a car in anger is a welcome sight for both drivers. The one-day show will be a bit of a challenge for everyone involved, but both feel up to it.

“I’ve heard a question, How do you prepare for only one day?” Rosenqvist said. “I think it’s mostly mentally, you just have to set your mind up that it’s going to be a long day. You’re going to be almost a different person at the end of the day compared to the beginning.

“But it’s pretty cool. You put us in a tough situation, I think that’s what people want to see as well. People watching on TV, they want to see us do something difficult, see a good race. That’s what they’re going to get I’m pretty sure.”

“Yeah, I feel it’s fine,” he said. “When race time comes, I think everyone will be up to speed. Obviously the race is going to be tough with quite warm temperatures, the track already being a physical track. It’s going to be a tough one for sure, but everybody is in the same situation.

“Personally I’ve been working really, really hard this off-season to prepare myself. I feel really strong and ready both in my body and mind. I’m ready to take on a tough day of driving. Can’t wait to go there and do it.”

Felix Rosenqvist will be my guest on this Friday’s show, but before you listen to that one, check out my other episodes where I talk IndyCar racing with Conor Daly and Charlie Kimball, and catch up with FR Americas champion Dakota Dickerson. You can listen here on iTunes.