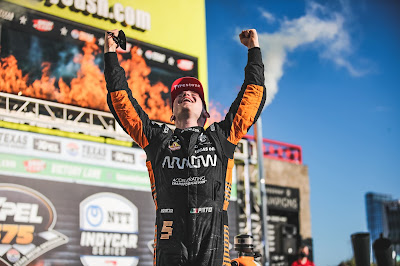 It was certainly a weekend of ups and downs at Texas Motor Speedway. Between the weather, lack of qualifying and the PJ1 compound, among other things, drivers' fortunes, just like in Texas Hold Em', changed by the hand.

Who were the winners and losers at Texas? Read on to find out.

Scott Dixon. Dixon entered the weekend with four wins at TMS, and in dominating fashion he picked up his fifth (and the 51st of his career) on Saturday night. He dominated the first 2/3 on Saturday, leading 163 laps, but eventually settled in the P4 position at the finish. The season has quickly reached the quarter-pole, and he is again at the top of the championship standings.

Pato O'Ward. Everyone knew it was only a matter of time before the 22-year-old Mexican would pick up his first win, and it came this afternoon in his 27th career race. O'Ward ran a brilliant race, being aggressive when he needed to be, and patient when he was told to be. This looks to be the first of a long line of success for O'Ward. It's been 69 years since Troy Ruttman became the youngest winner in Indy 500 history at 22 years, 80 days, and O'Ward, as well as Colton Herta, have a chance to eclipse that record four weeks from now.

Josef Newgarden. Newgarden didn't even make it to Turn 5 at Barber in the season opener, but has rebounded with two P2 finishes and a P6 on Saturday night. He's now fourth in points and back in the title hunt.

Scott McLaughlin. The second-fastest Kiwi on the planet had an impressive weekend in his first two oval races. While getting through the weekend with everything on his car intact would've been a great result, he went a step further, finishing just behind his idol on Saturday to pick up his first IndyCar podium, then finished P8 in Race 2. A tall task still awaits on May 30, but he's got to be heading to IMS with a ton of confidence.

Alexander Rossi. Rossi ran a solid race on Saturday night, moving up from his P16 starting spot to finish P8, but disaster struck quickly as he was taken out in the multi-car wreck at the start on Sunday. Rossi said afterwards while it seems like a repeat of last year, it's not because last year he didn't feel like he had a fast car last year but does this year. That may be the case and all, but as the great Rasheed Wallace used to say: "Ball don't lie!" Your results are your results, and Rossi is now 88 points down in the championship. Lots of points are out there this month, he has to go out and get as many as he can.

Sebastien Bourdais. Seb falls into the "Loser" category, although none of what happened to him was any of his doing. In Saturday's race he was punted into the fence by Newgarden, and Sunday he was hit from behind by Pietro Fittipaldi, which set off the huge wreck at the start of the race. He entered the weekend P7 in points while leading a huge AJ Foyt Racing resurgence, but headed home P14.

The Field. After the wreck at the drop of the green flag knocked out several cars, Rossi was confused as to why they didn't have qualifying Sunday when the track was dry and ready to go four hours before the race started. I was just as confused, and while the rule book spells out how qualifying on doubleheader weekends is supposed to go, as Indy Star writer Nathan Brown explains here, meaning if there is no qualifying it's set on entrant points, the fact is that there should be wiggle room, because if the opportunity (and time) are available to actually qualify the field, that should be what's done. Call it for the "integrity of the field" or whatever you want to call it, but every race should have a field that qualifies on speed whenever possible. I mean, if the two days of qualifying for the Indy 500 are rained out, do you really think they are going to start the race by owner points? No, they will use the available time to set the field on speed. Same case here.

Texas Motor Speedway. I'm still on my soapbox as I move to a new topic, because for the second year in a row, the PJ1 compound put into the corners to make the show better for NASCAR again affected the IndyCar race. I've heard lots of different takes on this, such as we should not go back to TMS or even that we should force a repave, but here's the deal: IndyCar is a guest there. NASCAR pays the bills and so the track will always be set up to their specifications. I think Eddie Gossage has been a partner with IndyCar, but what leverage does IndyCar have if they threaten to leave? I doubt IndyCar makes TMS a lot of money, so there is none. And as far as a repave (or change to the racing surface) goes, think of how grippy the cars would be, which means for the first couple of years there wouldn't be any passing anyway. One thing's for sure, if you want Texas to go back to being the way it was back in the day, you're living in the past. Those days are not coming back. But we also can't afford to keep racing like this at TMS, so someone has got to come up with a solution.

So here we go, kids, it's May! Four weeks from right now someone's life will have changed forever. Who's it going to be? It's going to be fun finding out.