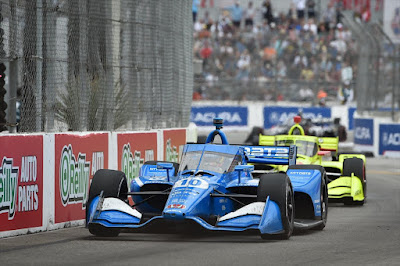 Like many of you, I was blown away by the show F1 put on at Circuit of the Americas over the weekend.

It was incredible from beginning to end, a true "stars and cars" weekend that drew the (second largest) race crowd in North America this year. And they put on a pretty good race.

It was also a bit of a harmonic convergence too. It was the first time back at COTA in two years, the F1 drivers were really pumped to be there -- which I don't think is always the case for every race, sorry -- and it got network coverage on ABC (with no commercials!), including a pretty strong pre-race show.

Of course, the rehashing done today focused mostly on the effect the Netflix series Drive to Survive and how it has helped bump up interest in F1 in the United States. I've watched all three seasons of DTS and look forward to S4 when it is released next spring. It's piqued my interest in F1 -- I now have a favorite team, McLaren, and a favorite driver in Daniel Ricciardo -- and while I don't watch all of the races I am a lot more interested in F1 than I was a couple of years ago.

Of course, the thought now becomes whether or not a DTS-inspired type of series could help IndyCar.

What is getting lost in the whole DTS mania is the fact that it is just one of three areas of focus F1 has used to grow its audience. The other two areas are social media and eSports. Formula 1 and its teams have dedicated themselves to those three pillars, and it is paid off.

Here's where the "it depends" answer comes in. F1 was able to do this because they can.

I'm not even going to guess how much a single episode costs to produce, but given the cameras, helicopters, drones, technology, global travel and personnel involved, it's probably not cheap. It results in a slick, very sexy production, but is that something that IndyCar would be able to produce? Because the standard has been set, an IndyCar 36-style show will no longer cut it.

No doubt, IndyCar wouldn't be able to put together that kind of a massive production, so is it worth it? The problem is that, again, the standard has been set. A DTS type of show isn't something they can half-ass, because the fans will see right through it, and it won't bring in new people to the sport. One thing that frustrates me about IndyCar is that it seems to revolve its interaction with people who are already fans of the sport. This type of show needs to get its tentacles around everyone, and it has to show IndyCar in the same type of crazysexycool (thank you TLC, RIP Lisa Lopes) format that F1 uses.

Along with that comes a multi-year commitment. The thing about the content game is that you always have to keep giving consumers more and more, or it won't work. We're talking tens of millions of dollars here, with a commitment to keep going even if it doesn't come with an instant ROI, which it won't.

Formula 1 is the biggest form of motorsports in the world. They come to the table with instant credibility, and because of their reach they can grow in an exponential manner that IndyCar can't, and that is something that needs to be put into the thought process as well.

If the money is there, by all means spend it. IndyCar has so much to offer and the world needs to see it, and if done well could raise the image of the sport tremendously. But it would take some time, would the commitment be there for as long as it needs to be?

The next step is social media. F1 and its teams have that on lock. While I am a McLaren fan because I'm intensely in love with their road cars, I was also drawn to the team because of the social media presence of not just the team, but the two drivers.

As a social media professional, what frustrates me about sports social media in this country is that we don't take it as seriously as many other sports in the rest of the world. Social media is supposed to be creative, and to me it's just a version of short-form writing. Of course it's a marketing tool, but social media accounts shouldn't be run by interns or marketing people, they should be run by writers who know how to create content, which the marketing team helps to push out.

There's a science to social media, which I know sounds funny. After all, we all do it, right? Yeah, but we all drive cars too, that doesn't make us an IndyCar driver.

I'm not trying to be critical of the series or its teams, but good social media is imperative to growing the sport. F1 gets that. Do you think F1 would announce some big news, like, say the release of the ticket design for the Indy 500, at 6 p.m. on a Friday night? Yes, that happened! How? Why?

Everyone in IndyCar can do so much more with social media, but it starts with a collective agreement that everyone would take it to a scientific level, with intersectional planning that will maximize the reach as much as possible. F1 understands that. It's got to be about the whole content package: writing, video, photography, stuff like realtime posts that lets fans know what it going on, right then and there.

I may be watching the race on TV or a device or whatever, but I'm on social at the same time. I want the info, I want to be taken inside. I want to be along for the ride. I'm not alone, that's what everyone wants, right? I want my social media to ooze with the passion and drama that made me fall in love with racing in the first place.

Back in 2005, I participated with a team in the then-Busch, now-Xfinity series that offered members of the media to be a "pit crew member for a day". I won't name the driver or the PR person (but I will say they are now married), but one thing I remember about that PR person is that she was constantly in my ear, pumping up her driver. This was before social media, of course, but that's the kind of feeling I want, I want to be inside the car with my driver while being pumped up by the race they are driving. I wrote an incredible story about that experience, but I give all the credit to the PR person, who gave me everything I needed to know.

Make the race big for me. Bring me in as a pit crew member and get me so pumped up about my driver, or that race, that it takes a couple hours to come down afterwards. That's the goal.

By my count, @McLarenF1 tweeted 39 times from yesterday's race. That's right, 39 times. If that can't get you pumped up, I just don't know what to say. But if you look through their timeline, don't you almost feel as if you are there with them? One of my beliefs is that when the event is happening, you can't oversaturate your followers, because it isn't possible. I mean, do I want to see Tweets every five minutes on a Tuesday in December? No, but do I want it when my car and favorite driver is on the track? Yes, as a matter of fact I do.

The last thing I want to talk about is eSports. Again, another thing that needs to be taken even more seriously. I took an eSports class last spring and it opened my eyes to the scope and potential of eSports.

While I'm pumped about IndyCar looking to get back into the video game game in the next year or two, I also think that they should find a way to follow the F1 model and having a dedicated eSports series.

I mean, look at this page and tell me it isn't cool. On YouTube alone, many of the races have well over 600-700,000 views. No, IndyCar can't do it up as big as F1, but man, can you imagine the number of kids that watch this kind of stuff?

What's stopping the series from dropping some purse money and each team picking drivers that they pay a couple thousand bucks to drive for them. Build an eSports studio in Indy, stream it over every platform possible and even charge admission and then give out tickets to whatever is happening at the Speedway next. Getting new, young fans takes outside-the-box thinking, and I believe this is one of the ways to do it.

Yeah, I'm good at spending other people's money, aren't I? It's just the thing is, I think if IndyCar is going to go all-in, it needs to happen now. F1 has laid that blueprint and after IndyCar just finished one of its best seasons, yet, the iron is hot enough to make a big strike.

It's about going from hoping things happen to expecting them to. I will admit seeing IndyCar trend on Twitter in any way, shape or form, but how about we act like we've been there before, and deserve to be there, and expect IndyCar to be trending. Because it should.

I love this sport and try to do everything I can to promote it and spread the IndyCar gospel. I know all of you do, too. It's IndyCar's time now, and while I don't know if they can quite reach the bar that F1 has set, I just want to see them freaking try.