Bringing Speed Back to the Indy 500

Though I can't find the direct quote, motorsports writer Brant James tweeted from a Performance Racing tradeshow roundtable discussion that IndyCar CEO Randy Bernard said that he wants to bring the speed back to the Indy 500, so long as it can be done safely.

I've been waiting for a long time to hear something like that!

Bernard has been saying and doing plenty of the right things lately, and it is amazing to see the momentum for the series that he has facilitated.

Since the craziness of 1996 where speeds jumped almost 10 mph in a year, the pole speed has only been above 230 twice since then. Back then, I was one of the believers that those speeds had become too unsafe and welcomed rules that slowed down the cars. The safety standards that existed for the cars, drivers and track itself were just not adequate for cars going that fast. But today a combination of stronger cars, SAFER barriers and the HANS device protects the drivers about as much as you possibly can. 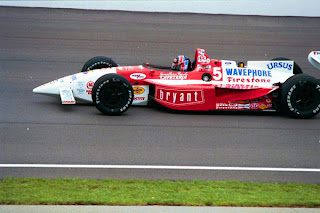 Now, I'm not part of the portion of the fanbase that says we should open things up and let the cars go as fast as they can. There is a point that it is just "too fast". Where that threshold lives is hard to say. 240? 250?

The difference between 225 and 240 is in the neighborhood of 2.5 seconds per lap (and for numbers geeks like me out there it's 22 feet per second -- 352 feet per second at 240 versus 330 feet at 225). Stretching that out over the 2 1/2 miles of the Speedway doesn't seem like a lot, although I wonder how the drivers feel about it. It still probably wouldn't look as fast to them as 215 does at Texas!

Then again, what do I know? On the highway 75 and 90 don't look much different to me (although I haven't driven that fast in years, YEARS I tell you!), so I'm just taking the guess that it might be that relative.

The time is right to do it for so many reasons. From a competition standpoint, it would force the three engine builders to step up their game and push their engineering forward, which would be fun to watch. It would also bring attrition back into the equation, which is the point of testing both man and machine. Now getting the cars to go 500 miles is just way too easy.

From a fan standpoint, it is a perfect opportunity to capitalize on the forward momentum and get people excited about the race again. Speed is what does it, always has and always will. I went to Pole Day every year from 1979-94, a time during which the four-lap track record was broken 15 times. There was an energy that existed that is hard to describe, a buzz that was felt around the whole town. Even people who weren't very interested in the 500 still knew what was going on.

There was a nice feel to time trials this year, as the fast nine shootout was fun to watch. But there were only 10,000 people there, it was just hard to get too excited. There was plenty of drama and Helio Castroneves' runs were just epic, and if there were 10 times that many people it would have been close to electric.

How much interest would there be for the 500 if the cars were going faster and pushing towards another track record? Plenty. People would stand up and take notice. Chicks dig the long ball, and they also dig track records.

And how cool would it be if the Speedway took it one more step, and the first driver to break Arie Luyendyk's one and four-lap track records of 237.498 and 236.986 would be serenaded with a tape of Tom Carnegie's famous line "It's a neeeewwww track record!"

The place would go nuts, and the racing world probably would too.
Posted by Mike Knapp at 5:37 PM