Friday is upon us once again, and today is about post-season awards. I’ve mailed everyone who appeared in a race this year a participation trophy, because they are all winners, darn it (!) and the guys listed below get the special awards, plus a free chicken dinner at the 15 Days In May banquet. Hope they can make it! 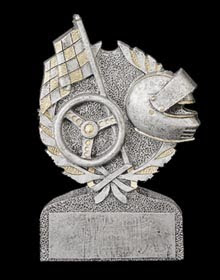 Driver of the Year: Dario Fanchitti. Will Power won more races (5) and captured more poles (8) but his lack of performance on ovals gives this one to the Scotsman, who logged three wins, including the Indy 500, and a ridiculously consistent performance all year long to win the IndyCar title.

Drive of the Year: Tony Kanaan (Indianapolis). TK had a dreadful weekend of qualifying, crashing twice before squeezing into the field with 30 minutes to go on Bump Day. Starting dead last he drove up through the field and ran as high as second before pitting for fuel with four laps to go and finishing 11th. TK drove so hard that day and it was fun to watch.

Co-Rookies of the Year: Simona de Silvestro/Alex Lloyd. Both had great runs at the 500, with Lloyd finishing sixth and de Silvestro placing 14th and earning ROY honors there. Each qualified in the top-10 once (not easy coming from a 2nd-tier team) during the season and had some solid runs, as well as some setbacks, but overall both turned in a typical rookie season and seemed to improve as the year went on.

Best Looking Car: Takuma Sato’s Lotus-sponsored ride for KV Racing paid homage to the Jim Clark cars of the mid-1960s. Unfortunately we never saw the car for long on race day, as Sato usually hit something along the way and damaged the car. Sato, who won’t return in 2011, combined with E.J. Viso and Mario Moraes to wreck close to 40 cars during the season.

Race of the Year: Kentucky. The championship drama at Homestead was fun for a while but Kentucky was the day for the non-red cars to shine. Dan Wheldon led a race-high 93 laps and finished third, while Ed Carpenter qualified on the pole and led late until having to pit for fuel and giving up the race lead (and win) to Helio Castroneves. Momentum had been building for the non-Ganassi/Penske/Andretti Autosport teams on the 1.5-mile ovals all year, and Kentucky was where they almost pulled it off.
Posted by Mike Knapp at 12:49 PM