(Second in a two-part series)

When Graham Rahal and Charlie Kimball were introduced as Target Chip Ganassi's newest drivers last week, Ganassi made a strange comment that really got me thinking.

"As a company, we need to stay competitive and on the forefront," he said last Thursday. "I think you have to be constantly looking at what drivers are coming along. I'm not pushing (Dario) Franchitti and (Scott) Dixon [age 37 and 30, respectively] out the door, but they are obviously of a different era than these guys."

Where did a comment like THAT come from? You double the number of drivers in your team and then talk about the departures of the other two, that is just weird. 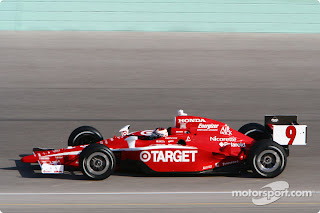 On the surface, Ganassi bringing in two young and talented drivers makes perfect sense. Looking ahead to the future, if you have the means it's best to lock up young talent and give them the resources to ultimately take over the lead roles of the team.

Franchitti will never be "pushed out the door". He's too valuable in so many ways beyond just the box scores, and right now is the best driver in the series and a popular champion. Though he likes to work with one-year contracts, so long as his desire and talents don't decline any time soon, he can drive for Ganassi until he decides to walk away on his terms. That could be as early as after the 2012 season, but still it will be his decision. He's earned that right.

So if that quote doesn't apply to Franchitti, Dixon is the only one Ganassi could have been referring to. Even in the questions I've heard directed at Dixon this past season makes it seem like there isn't widespread confidence that he is with the team for the long haul.

He's the red-headed stepchild (pun intended) with that team, and trying to figure out why is something that takes a lot of thought, because on the surface it just doesn't make sense.

To me it's a mixed emotion. Ganassi's indifference towards one of his most successful drivers -- and given who he has employed in the past that says a lot -- is all at once mind-boggling and something that given the new environment that is IndyCar racing makes sense.

Mind boggling because the guy is a great racer. In just 115 IndyCar starts, Dixon has 24 wins and 53 total podium finishes. He's also won the series title twice (2003 and 2008), has won the Indy 500 (2008) and has completed every lap at Indy seven times in the last eight years. Dixon is consistently fast, takes care of his equipment and makes his boss gobs of money.

You would think that some of the decisions about his future would be on his terms, that he earned that right almost as much as Franchitti has. But that isn't the case.

Two words in Ganassi's quote jump out at me: "different era". Guys like J.R. Hildebrand, Rahal and Kimball represent what IndyCar and its teams are looking for going forward. Circumstances are falling into place where open wheel racing can make a serious push into the national conscience of race fans and sports fans in general. Drivers all of the sudden want to drive in IndyCar, the series is stocking up its farm system by establishing a legitimate ladder program and sponsors are looking once again at investing their money.

It's almost now or never, and the clock is ticking. Everybody knows this.

With that in mind, owners want people who can drive, but who at the same time are outgoing and can deal with sponsors, media and fans through face-to-face contact and all other sorts of social media outlets. That can balance all of that while maintaining a laser-like focus to their job.

That's where Dixon seems to struggle. He seems like a nice guy who smiles very easily, but otherwise is extremely guarded and private. He has a Twitter account -- a social media many drivers use to quite a large extent to stay in touch with fans -- but has other people tweet for him instead of opening up a little sliver of his life to give us a better look at him. While I have never seen how he interacts with fans or sponsors personally, it does seem like in interviews he is very polite, but it is obvious he is uncomfortable and would rather be somewhere else.

His driving style is just as guarded. Fast as hell and very cerebral, he gets the job done, but my pulse has never been sent pumping by watching him tear through the field or make an all-or-nothing pass for the lead. He represents the unfortunate set of "I had a second-place car and I'm happy finishing second" drivers that have seem to come to the forefront of the sport, especially in NASCAR.

Mind you, personally I like Dixon as he seems like a very nice man, but when he wins a race it's like "cool, the guy won". I just don't see anyone being inspired by him. I think in terms of raw talent he is in the team picture with the greats of this generation when it comes to the track, and if he even scratched the surface of some of these guys and their charisma and personality we wouldn't be having this discussion.

Maybe Dixon is too good for his own good. An ultra-talented driver who off the track doesn't represent the entire package that it is starting to appear a top driver in IndyCar needs to possess. Kicking a successful 30-year-old driver who has 150-plus great races left in him out the door?

Welcome to the new era.
Posted by Mike Knapp at 5:44 PM