Like all of us, Jake Query loves the Indianapolis 500. But unlike the rest of us, he's fortunate enough that it’s also his job. A part of the IMS Radio Network since 2007, the North Central High School and Indiana graduate gets to spend his month of May at the Speedway, and also gets paid to do it. Needless to say, he likes his gig a lot. 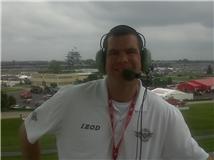 After two years of working as a pit reporter, Query moved high above the SE Vista in Turn 2, where he has now spent the last two years. As of now he expects to handle those duties for a third straight year in 2011.
Query, who you can find on Twitter @jakequery, was nice enough to spend some time on the phone with me and talk a little racing. Great guy, and even greater insight as to what makes the 500 so special.
15 Days in May: Growing up in Indy the 500 has probably always been a part of your life, but what are your first memories of the Speedway?
Jake Query: My grandparents lived in Clermont, so when I was little my parents would go to the race and drop my sisters and I at their house. I first remember listening to the race in 1979-80, and the first race I went to was in 1981. We had paddock seats across from Rick Mears’ pit (the year of Mears’ frightening pit fire). After that, my dad and I would go every year and sit in the SE Vista in Turn 2. I’ve now been to the race 27 times.
When I would go to the race (as a kid) I would give my mom two blank casette tapes and my jambox and have her record (the radio broadcast) of the race. I had those races on tape and that’s what I’d listen to all the time. I’ve probably listened to those races thousands of times.

15DIM: When did you decide to become a broadcaster, and was getting the opportunity to work at IMS a goal of yours?
JQ: My goal of being a broadcaster was to make a living at it. That said, it fell into place that way and once I started working in Indy I wanted to be involved in any way I could. When I joined WIBC (in Indianapolis) the first thing I said was “what can you do to get me on the network?”. When 2007 came around I had not done anything with the race, but on qualifying weekend they called and said they needed someone in the pits. They threw a headset on me and handed me a microphone and two weeks later I was doing the Indy 500.
After the race in 1983, my dad and I were leaving and I told my dad “one of these days I’m gonna do the 500 on the radio, and I’m going to do it in Turn 2”. At the age of 10 I knew broadcasting was what I wanted to do.
15DIM: What was the feeling like when the cars come at you and you hear them throw it to you in your earpiece?
JQ: It’s emotional because I’m a fan like anybody else. I know there is a heritage in Central Indiana and how many people listen to the race since it’s blacked out on TV. Like anything else you don’t think in the moment of what you are doing. It’s later when you look back at it is when you realize what you are a part of. To me it’s the most flattering aspect of my career that I’ve been lucky enough to be part of that. During the pre-race, I’m giddy, I don’t want to be anywhere else in the world because I’m a fan. But when I hear my name in my headset the professional side takes over.
15DIM: How do you spend the rest of the month?
JQ: I do freelance stuff every day. Every minute a car on the track, whether or not I have to be there I want to be there. You really can’t call this a job, can you?
15DIM: The roster of great broadcasters who have done the 500 is incredible. How does it feel to be a part of that fraternity?
JQ: I think it’s laughable. When I think about guys like Sid Collins, Paul Page, Bob Jenkins and Jerry Baker, that’s a different league. The only connection I have to them is that I’m lucky to have been put in the same position they were. The job description is the only thing that links us, otherwise they are just in a different stratosphere.
I’m a historian of the place. I’ve read everything about it and have had a lot of lunches with (500 historian) Donald Davidson. To know that in the 100 years of that place, the relatively small number of people who have had the privilege of broadcasting that race and that I am a part of that, to me that is extremely special.

I've been to almost every major sporting event in the country besides the Kentucky Derby. I've covered three Super Bowls and five Final Fours, and there is nothing in sports that compares to the energy of the first 10 laps and the last 10 laps of the Indy 500.
15DIM: What role do you have in the other races of the series?
JQ: I’m a turn announcer for every road and street course and a pit guy for the ovals. The guys that I work with (such as Mike King and Mark Jaynes), there is no more fun group of guys to travel with. We make fun of each other like a bunch of 15-year-olds 22 hours a day and we are professionals the other two.
Posted by Mike Knapp at 10:31 PM