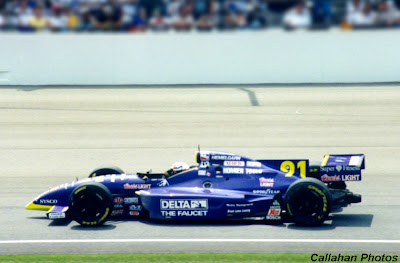 I've seen some discussion recently about where 1996 winner Buddy Lazier fits among the roster of great drivers in 500 history.

I think everyone can agree that Lazier wouldn't make it on anyone's Top 33 list. But I do take exception to people who say he is either not worthy of consideration because of the era in which he had his succcess or he is overrated because of the circumstances that were going on around him at the peak of his career.

When I was looking over the original list of 100 drivers that will ultimately make up the Speedway's Greatest 33 list, I was surprised to see there were several race winners left off. I thought perhaps all of them would be included given the reverence the Speedway and fans pay to every driver who has rolled into Victory Lane.

Still, I was glad that some weren't on there because they truly were "one-hit" wonders. Some guys won the race and the rest of their career was a disappointment, so they didn't belong. There are some drivers who never won the race but I think had better careers than guys who won once and did nothing else, and many made the cut in their place, which was the right thing to do.

Who knows how the voting will end up, but Lazier deserves to be in at least the top 50. Besides his victory he had four other top-5 finishes, including two runner-up efforts. In fact, from 1996-2000 he had an amazing run of five years where he finished first, fourth, second, seventh and second. He also placed fifth in 2005.

His runner-up finish to Juan Pablo Montoya in 2000 was a very impressive drive to many who were there that day (including me). Montoya was the best driver and had the best car, there is no doubt about that. But it wasn't a walk in the park the entire race, as there were points in the race where Lazier drove really hard and made Montoya work.

Unfortunately, Lazier's best years at Indy coincided with the dark age where CART drivers didn't participate in the 500, and when they did, they dominated, as Montoya's ice-breaking win was followed by three straight wins by Team Penske. His success came when the "stars and cars" (remember that phrase?) were racing someplace else.

When he was among the best drivers in the IRL, in all fairness he didn't go head-to-head with the best drivers in the sport at the time. That can be nitpicked to death, but sooner or later the "yeah, but..." statements have to end. Because if you are going to do that with Lazier, you have to do it with a lot of other guys. Arie Luyendyk had a win and a couple of poles in that span too, do we take his career down a notch or two because of that?

Arie is flat-out one of the greats, one of the Greatest 33 in fact. Lazier probably isn't, but the point is that while Arie had success prior to the split, he blostered his resume greatly in the same span as Lazier.

I don't have a problem with either one, because they beat who showed up. They had no control over the political storm that was raging around them. Showing up and racing was all they could do, and we can't go with revisionist history to say those things wouldn't have happened if the other drivers were there. Maybe it would have changed, but so would the course of A.J. Foyt's legend had Eddie Sachs and Parnelli Jones not experienced issues with the checkered flag in sight to allow Foyt the chance to win.

Last I checked, none of A.J.'s wins had asterisks. No one's should.

Racing doesn't have sabermetrics like baseball (thank goodness), a series of concocted formulas that try and compare racers between eras. You build a body of work, and it stands. You accumulate a career over time and stack it up to others.

In the end, it was a great career, no matter how you try and stack it. Lazier's body of work proves he is better than a lot of people give him credit for.
Posted by Mike Knapp at 4:41 PM