A little over 10 years ago, Alex Zanardi lost the lower half of both of his legs in one of the more horrific accidents in racing history.

Today, he won the handcycle division of the New York Marathon.

If the man doesn't inspire you, nothing can. 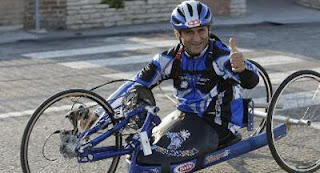 At one time, Zanardi was one of the best, not to mention most exciting, drivers in the world. His daring moves on the racetrack are stuff of legend, and many of them haven't been duplicated since. Zanardi won 12 races in 1997-98 while winning back-to-back CART championships, and one of his enduring legacies to the sport is his post-race celebratory donuts at the start-finish line.
His accident in September, 2001 may have been the end of his high-level racing career, but it was the start of a new life that he embraced with his usual vigor and enthusiasm. Instead of feeling sorry for himself or lamenting the end of his successful (and more likely lucrative) career, Zanardi didn't see his own limitations, instead he worked at figuring out how he could make the most of his situation.

Within two years he was driving race cars with hand controls, and since 2005 has made 105 starts in touring cars, winning four times.

He took up handcycling (basically a three-wheeled bike that is powered by hand cranks) in 2007 and has won several races, with the hope of representing Italy in the 2012 Paralympics. If it has wheels, the guy can still make it go fast...I know if I raced handcycles and I were lining up for a race and Alex Zanardi rolled up next to me, I would probably conceed I was racing for second place.

The most amazing thing? If you do a Google search of Alex Zanardi photos you almost always see him with a smile on his face. For everything he has been through, he still sees the best in everything and still sees life as a gift, and something to be lived.

Like Greg Moore, Zanardi never raced at Indy, but if he had it's a good bet his face would be on the Borg-Warner Trophy. Still, he is an amazing ambassador to the sport and is a reminder to all of us that nothing is truly impossible.
Posted by Mike Knapp at 10:22 PM