The Indy 500 lost one of its legends today as 1960 winner Jim Rathmann passed away at the age of 83. Rathmann was the oldest living 500 winner (Parnelli Jones now assumes that honor) and was one of the few drivers in the race's history to live 50 years beyond his victory. 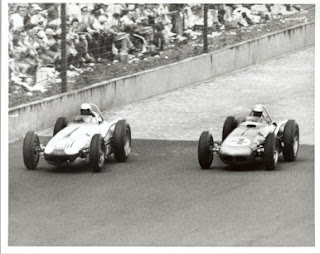 Many long-time fans of the 500 consider Rathmann's battle with Rodger Ward to be one of the greatest in the race's history. Starting in the middle of the front row, Rathmann took his first lead on lap 25 and eventually led the race 12 times for a race-high 100 laps on the day.

But that is only half the story. Beginning at lap 123, Rathmann and Ward, the 1959 and '62 winner, swapped the lead 12 times over the course of the next 70-plus laps. Rathmann finally took the lead for good with four laps to go when Ward's right front tire began to wear away to power his way to the win by just over 12 seconds.

What is even more amazing is the fact that the total number of lead changes -- 29 -- is a record that still stands today!

By all accounts Rathmann was a kind man who behind the wheel of a race car was as tough and competitive as they came. His victory capped a four-year run (1957-60) that saw him finish second, fifth, second and first. In 1957 he started 32nd and worked his way up through the field to eventually finish as the runner-up to Sam Hanks, one of four times he started in the seventh row or further back and raced his way to a top-10 finish. In 14 starts he completed 2,320 laps, leading a total of 153 circuits and had three seconds to go along with his win.

Rathmann was inducted into the Motosports Hall of Fame of America in 2007 and as part of the Indy 500's Centennial Celebration was named one of the race's Greatest 33 drivers.
Posted by Mike Knapp at 10:11 PM