The ticket for the Indy 500 was unveiled at an Indianapolis-area middle school today, and as expected it carried the likeness of 2011 champion Dan Wheldon. 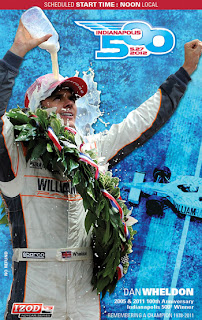 There is always some anticipation when the tickets are shown to the public, because that means they go in the mail soon after. Just another reminder that May will be getting here soon, and the race is just 82 days away.

While it is tradition that the ticket carry a photo of the previous year's winner, this time the circumstances were a little different. While drivers over the years have not returned to defend their titles for various reasons (injury, retirement, move to another series), Wheldon became the first reigning champion since George Robson in 1946 to be killed in a racing accident prior to returning to Indy.

I think the ticket looks great. I have tried to keep all of the tickets from the races I have atteneded over the years as they are a neat momento, and I will definitely be hanging onto this one. It captures the essence of what was a truly crazy day. All of the hoopla surrounding the centennial, an amazing battle on the track and the wildest finish ever, with just the second last-lap pass in the history of the race.

It's still sad to think about Wheldon being gone, because his win at the Speedway had revitalized his career and brought him tons of new fans and well-deserved attention. Still he is and always will be a great champion and one of the legends of the 500.