I thought about calling this the "My Left Foot" edition in honor of Dario Franchitti, but changed my mind. Yeah, I know the movie was about a man who could only use his left foot, as opposed to Dario not being able to use his, but it's late and for a second I thought it was funny. I was going to make fun of Dario about it but then I remembered how Derek Zoolander of "Zoolander" fame couldn't turn left and he was still able to carve out an incredible career.

Anyway, it has now been 166 days (and counting) since the official season finale in Kentucky. If you don't mind, I am not counting Las Vegas. Since the season is now just a little over a week away, I figured it was time to prognosticate.

Thanks to Pressdog, I am officially primed for the opener, and will be ready to throw one back at the first mention of "momentum". I'll stop short of calling it my most important purchase ever, but it is up there. 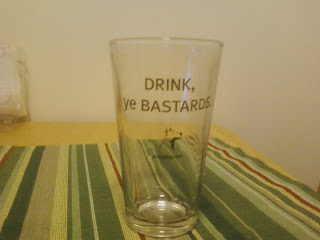 On with the predictions:

IndyCar Champion: Will Power. With 11 road and street courses on the schedule, this is Will's year to ascend to the throne. He could easily win at least half of those events, and if that happens all he will have to do on the ovals is go into prevent defense mode and come home with a top-10 finish and some points. Not as easy as it sounds, of course, but the way this year is set up it is his for the taking.

Indy 500 Winner: Tony Kanaan. TK has done everything BUT lead laps and win the race the last two years, and is the favorite to find victory lane in a fan poll conducted by IndyCar Advocate earlier this week (cool poll, Zachary!). Amazingly enough Kanaan has led just 17 fewer laps than Helio Catroneves (3 wins) and 21 fewer than Dan Wheldon (2 wins). It's not how many, of course, but when, and TK is due.

Over/under before Rubens Barrichello wins a race. I'm putting it at four (4) and taking the under. Four straight road/street courses to start the season gives him plenty of opportunity to catch up on whatever learning curve is left. I'm sure he will be motivated to do well in Rio, so maybe that will be the place. Now normally I'm not one to subscribe to conspiracy theories when it comes to drivers getting "the call", but if it somehow happens to Rubens at Rio I will happily look the other way. (Kidding!)

First-time winner. I think James Hinchcliffe wins a race this year. Or maybe hoping as the more Hinch can run up front and get into the media spotlight, the better off the series will be.

Breakout season: Graham Rahal. About the only guy who had worse luck than Rahal was Ryan Briscoe, who I think was hit at one time or another by every car in the paddock. Rahal qualified well and had some tough spells on race day. The biggest highlight, though, was his drive at Indy where he passed close to 65 cars on the track, led the race with 75 miles to go and ultimately finished third. If the series is looking for a "face", Rahal might be it. Young, articulate, social-media savvy and a great driver (not to mention American, which to some still matters), he is like Hinch...get him in front of the media as often as possible.

Rookie of the Year: Simon Pagenaud. The candidate pool is small as only Pagenaud, Josef Newgarden and Katherine Legge will be up for the award. Given Pagenaud has made 17 starts between Champ Car and IndyCar and Legge made 28, it's a little unfair for Newgarden -- a "true freshman" in college football terms -- to be competing with them, but those are the rules. Pagenaud was a pleasant surprise during testing at Sebring and has an experienced team behind him in Sam Schmidt's operation.

A few other predictions: The Indy 500 pole speed will be similar to speeds we have had over the last several years...Ed Carpenter will win one of the oval races...This one more involves some serious and hopeful finger-crossing, but Milwaukee will be a success. Let's put it this way: it has to be. I'll be there, how about you?...I think Chevy will win the most races, with Honda a close second...When the 2013 schedule comes out will everyone calm down about the ovals?

And my final prediction? Lots of awesome stuff is going to happen this year and 2012 will be one of the most memorable we've had in a while, and that is saying something. I do agree with Randy Bernard that this year will be one hell of a ride.
Posted by Mike Knapp at 11:52 PM