"Most of all we are missing Dan, that wound is still fresh, and this race would have been better with him in it." -- Ryan Hunter-Reay

Finally we have racing! St. Pete was a new beginning in so many ways, and despite a few hiccups I think the race was a great start to 2012. It was obvious that the memory of Dan Wheldon would be on the minds and hearts of everyone in the IndyCar world, and of all the fitting tributes that happened during the day, this one might be the one that sticks in my mind the longest. 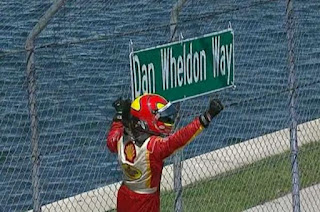 There was a lot to talk about when it comes to Sunday's race, and trying to prioritize is not easy. So let's just do this...here is a bit of a rundown of what happened, in no real order.

*Helio wins! Castroneves drove a brilliant race to win for the first time since Motegi in 2010 and third time at St. Pete. Fast and  focused all weekend, he started his put-up-or-shut-up season with a bang. If you didn't get emotional watching his post-race celebration, just stop watching the sport.

*The podium. The top three spots were taken by the teams of usual suspects (Penske, Ganassi, Andretti), but Scott Dixon's runner-up finish was a long time coming at this circuit. Overall it was his third P2 here, he had been P22, P16, P18 and P16 the last four years. Ryan Hunter-Reay stepped up again with a podium, continuing the success he'd had at the end of last season.

*Other notables. James Hinchcliffe finished three seconds back of RHR in fourth to tie a career-best. Get used to him running up front...Ryan Briscoe led some laps and finished fifth, while Simon Pagenaud continued to impress with a sixth-place effort...Will Power got out of pit sequence early and came home seventh, while Josef Newgarden, the only true "rookie" in the field, ran as high as third and drove a solid race to place 11th...Dario Franchitti was amazingly enough never a factor and finished 13th, while Rubens Barrichello drove around and learned as much as he could in placing 17th...Takuma Sato led 10 laps before finishing 22nd.

*Mechanical issues. Chevy was obviously the dominant powerplant on the day, and Lotus had its struggles, with Alex Tagliani carrying the banner for Lotus in 15th place. Still, there were several gremlins that sidelined several drivers, most notably Tony Kanaan, who finished 25th after experiencing electrical problems, and Sebastian Bourdais, who in a Lotus had charged to the front of the field (unofficially as he never crossed the line before pitting) but later dropped out. There are so many variables that just can't be run through in testing and need some real-time data. Many of these issues should be ironed out over the next few weeks.

*Race control. Race No. 1 of the Beaux Barfield era was a success in the sense that race control did not become a part of the story. Since the driver's meeting was closed (and with the exception of the tradition at Indy I think they should stay that way) it was hard to know exactly what Barfield covered. But I thought the drivers gave each other space, especially on starts and restarts, and seemed to take the time to feel out the car and start pressing the issue as the race went along.

A possible controversy was avoided with a quick response to the Castroneves/Ed Carpenter incident where Helio spun out Carpenter on the exit of turn 14. I felt from the beginning it was a racing incident, a group of cars had been pressing Ed and Helio had a run on him onto the straight, but unfortunately Carpenter slowed to dive into the pits. Just one of those racing deals, drive on. It was a quiet day for race control and like a referee who never gets noticed, it means they had a good afternoon.

*Parade of IndyCars. If you watched the race at home, you would have gotten the idea that there was little to no excitement or passing. Those there, including Pippa Mann -- who was a great race correspondent on Twitter -- said there was a lot more going on than what we saw. Which leads me to:

*TV coverage. I thought it was average at best. While I am appreciative of ABC's partnership with the series, I have always believed they fall short on coverage. One thing I tell people watching a race in person for the first time is to not fixate on the leaders, look all through the field as just because a battle for 20th place is exciting too. Unfortunately they spent too much time on the front of the field and not enough showing some good battles. Thanks to the people there who set us straight.

One other thing is that they were constantly slow on identifying drivers who had made passes for position or had experienced difficulties that put them out of the race. Case in point: Bourdais pitted as the leader and then moments later was out of the race. You would have thought that he had disappeared into the Bermuda Triangle for the amount of information they had.

There are just too many ways to cull information. Again, Mann and others were tweeting way more info than we were catching on TV. That is inexcusable.

That said, I thought the network's Wheldon tribute was very, very well done. It was hard to watch and very emotional to relive what happened last October, but hats off to them.

*Next week. I'm happy for a quick turnaround to Barber. I think with one race down many of the things learned in the new equipment will make the racing even better next week. NBC Sports Network takes over the coverage, with Tony Kanaan the subject of what should be a very entertaining IndyCar 36 segment.