Wired in at the Social Media Garage and getting primed for a little Bump Day action. It's already a hot one here, 79 degrees at just before 10 a.m. with the high expected to top out at 88. Practice is ongoing and cars will be presented to the qualifying line at noon.

Ten cars have been on the track today, with Dreyer & Reinbold Racing's Oriol Servia leading the way at 223.752 mph. Sebastien Bourdais is second on the pylon at 223.479 and Wade Cunningham third is rolling at 222.794.

Simona de Silvestro is up to almost 215 in her Lotus but Jean Alesi is still sitting around 209 in his machine. Scott Dixon and Dario Franchitti have both run over 25 laps in the 215-216 range to get in a little race setup work.

Nine spots are up for grabs today, and with the conditions the way they are I expect those to be filled in the first hour of qualifying. That fills the field of all "available" cars, so the big question for the day becomes: does a mystery car come out of the woodwork and give us a little bumping action? It sure would make things a little interesting.

Today is also Armed Forces Day, and there are plenty of military personnel and equipment on the grounds. As the son of a Korean War veteran I'd like to thank all of the men and women who protect our country and wish them Godspeed in their service.

De Silvestro is first in the qualifying line as we are now about 20 minutes away from the start of Bump Day. Again, all the people I've listened to and eavesdropped on say we will have just 33 cars so once the final nine are in the track will open for practice.


Walking through the garage, there is a decent amount of activity among the qualified cars, and several teams have tweeted they will be out later on this afternoon. Today is a great sim for next week as the initial weather reports indicate we will have a day just like this for the race. 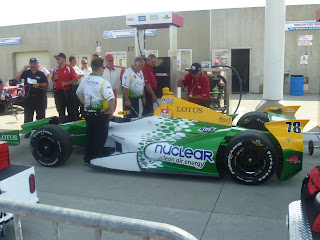 This is a funny picture from back in the garage area as several teams were waiting in line to pump gas. De Silvestro's car was getting some Sonoco racing fuel (shameless sponsor plug) and Bourdais was just behind. Wow, Seabass' car is just gorgeous. The livery absolutely pops when it is on the racetrack.

With what looks like 33 cars on the grid, drivers Pippa Mann and Jay Howard have officially released statements to the effect that they are no longer in the running for a ride. Pippa was tremendous in the Social Media Garage yesterday, very gracious and classy despite just receiving news that her ride had fallen through for this year. 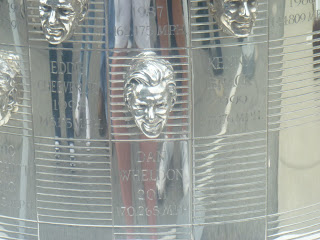 Seven cars are in the field, including the Lotuses (or Loti) of de Silvestro and Alesi. Simona averaged about 214 for her laps while Alesi tiptoed through his run at 209. Two spots are left before the field is full, with Bryan Clauson and Ed Carpenter the lone two looking in right now.

Clausen just did an install lap and brought it back in, and his Sarah Fisher Hartman Racing team has the cowling up doing a few extra checks. He seemed very relaxed in the qualifying line, chatting up his boss and looking like yesterday's turn 1 crash was behind him.

Bourdais' four-lap average of 223.760 is the best of the day so far. Servia's last three laps were all within .4 mph of each other, meaning he was pretty hooked up. His team tweeted after qualifying that he believes he can still get to the front from his current spot on the outside of row nine.

With little action on the track, I've done a little more looking around, and got this picture on pit lane. Something is definitely missing this month as Dan Wheldon has been on everyone's minds. I ran into the Lids store next to the Social Media Garage and checked out the display of Wheldon's Lionheart memorabilia and have to admit that I got a bit choked up looking at his stuff.

I'll recap last year's event later on this week and talk about Wheldon's day. Unless you were here and watching him, you just have no idea how brilliantly he drove.

Clauson is in the field after four very conservative laps at an average of 214.455. He's been a popular guy around here this weekend as he has a lot of followers from his USAC racing. I'm going to editorialize for a second -- I've heard a lot of old school fans say the way to bring folks back to the Speedway is to bring more drivers up through the USAC ranks as people will want to follow them.

You know what? Maybe they might be a bit right. A guy like Clauson has proven he more than belongs here, and if the sponsorship is there maybe teams should consider testing USAC guys out and who knows, some of them might work out. And it appears the fans like it too. So let's not close off the advancement to the series from the USAC ranks just yet, for a lot of different reasons.

Anyhow, rant over. Cars are out on the track now for practice, and I am going to the museum and grab a couple of different perspectives of the track.

So I was halfway out the door of the Social Media Garage and Ed Carpenter headed to the track. Since he is (supposedly) our final qualifier I headed to pit road for the action. Carpenter ran an easy 222.324 to snag the 28th starting spots. Clauson, de Silvestro and Alesi earn invites to the 11th Row Party.

Charlie Kimball just went hard into the wall after losing the car in the middle of turn 1. The car's momentum popped the No. 83 car in the air momentarily, just as Carpenter's car did yesterday. If they can rebuild the car he will start 14th, if not and they move to the 83T he goes to the back of the field.

His mess is cleaned up and practice has resumed.

Last Happy Hour of the weekend is approaching. Lots of action on the track as everyone is getting a little more work done before it gets real next Sunday. It's 88 degrees right now, but a few clouds have moved in and the track is cooling a bit.

I've spent the last couple of hours walking the garage area and the museum, as well as watched some practice from between turns 1 and 2. At the time there was about an 8-car train that included Bourdais, Ryan Briscoe, Graham Rahal and EJ Viso. Good stuff. Can't wait to see 33 of them out on the track next Sunday. 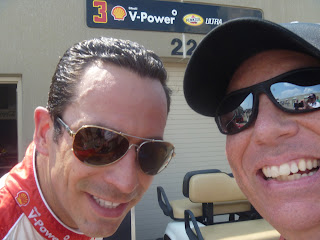 While I was back in the garage area I ran into another familiar face, and if you have read this space before you know he is one of my faves.

I'm heading out to watch the last hour of practice, but will file a weekend wrap-up either tonight or tomorrow. With the Speedway going dark for a few days, I'll get caught up with photos, more stories and a few perspectives.

One of those perspectives involves this photo and many others I took that show the awesome access and fan-friendly attitude that exists in the IndyCar series. I had no more access than anyone off the street can get (at least where these pictures come from), but I still came into contact with a lot of great people.

Hey, the purpose of this blog is so I can meet people, cheer in the press box (or blogging area) and act goofy around drivers and other famous people. In that vein I had a blast this weekend!

I'm going to sign off from the Social Media Garage and will check back in later. Thanks so much to Cassie Conklin and all of the folks at IMS who made this happen. It was so much fun to hang with all of my fellow bloggers and talk a little racing. It has certainly been a special weekend, but I'm guessing the 500 next Sunday will top this!
Posted by Mike Knapp at 9:05 AM