How Indy Will Remember Dan Wheldon

For starters, his winning car, which was crashed by Wade Cunningham at Texas a couple of weeks after he drove it to his improbable 500 win, has been restored by Sam Schmidt Motorsports and will be on display at the Hall of Fame Museum through May 20, then near the Pagoda on Community Day May 26. If you are at the Speedway this weekend, check it out. 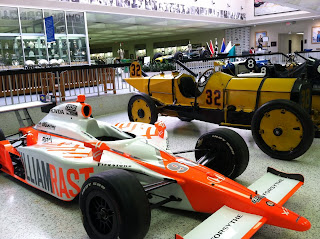 John Oreovicz of ESPN (and other outlets) took this photo of the car in the Museum earlier today. Looks great! And parked next to the Marmon Wasp...a perfect bridge of the race's centennial.

Susie Wheldon, Dan's widow, will be at the public Driver's Meeting on Saturday (May 26) and will receive his champion's ring at that time. Mega props to Susie for doing this. I cannot imagine what it was like to lose her husband (and the father of her two children) so tragically, but she has carried on with incredible strength. I'm sure coming to Indy will be very tough, and I bet she will not stay for the race, but to make the trip and graciously accept some of the accolades that Dan himself would have received this month is great.

Race Day should be special. For starters, all fans will receive a pair of white cardboard sunglasses, which was one of Dan's fashion trademarks, and will be encouraged to wear them on the parade lap, lap 26 (to represent his winning car number from 2005) and lap 98 ('nuff said). It's really a good idea as by all accounts Wheldon liked to have fun and I think this is a great reflection of that. Happily they went with the sunglasses and not the replica super-tight driving suit.

But then, IMS drops the hammer. In what could be one of the emotional moments ever seen at the Speedway, Bryan Herta, Wheldon's friend, former teammate and car owner from a year ago, will climb behind the wheel of the No. 98 William Rast Dallara and drive a lap around the track moments before the command to start the engines. Wow. Just...wow! To be there in the same seats where I sat to watch the race last year will be an unbelievable privledge.

As always, the Speedway is doing it right. No doubt, what happened in Las Vegas back in October is still fresh in the minds of everyone who witnessed it, whether in person or on television. Figuring out how to recognize Dan and what he accomplished last May was probably a tough task. Fortunately they nailed it, and race fans have a lot to look forward to next weekend.

This is worth watching again: