Sometimes Pictures DO Tell A Story

If you have been on Twitter at all today, you have probably seen the photo of a young James Hinchcliffe getting an autograph from his hero, Greg Moore. If not, here it is: 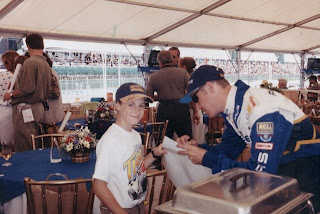 I'll get to my Toronto preview later on, but as a little foreshadowing, I'm picking the little dude in the photo to win. And yes, I'm picking him to win at Edmonton too. No reason, just because I think a Canadian winning an IndyCar race in Canada would be hella sweet.

This picture just strikes me in so many ways. Part of it is haunting, knowing what happened to Greg Moore just months after this photo was taken in the summer of 1999. Another part of it is sweet because there is still a lot of that little boy in Hinch, which is why he has become so popular. My son Kevin is just about the same age as Hinch was in this picture, and I see that kind of look on his face many, many times.

Most of all, I think it shows the impact that athletes can have on people, especially children. Hinch was so inspired by Greg Moore that he is driven to carry on the legacy of Moore and other Canadian drivers who have come before him. The story of him carrying Greg's red gloves on his epic Fast Nine run at Indy is so incredibly cool, and what is even cooler is the fact that Moore's spirit and memory carries on to this day in the hearts of a number of drivers, not only in Hinch but Dario Franchitti, who was one of Greg's best friends.

I'm sure Hinch might be getting some good-natured ribbing from the people in the paddock about this photo, but I hope at the same time they take a minute and think about the impact they have on young people and fans. I know they are busy and have a lot going on when they are at the track, but just taking a minute to engage someone can leave a long-lasting impression on them. In my two stops at Indy and Milwaukee this season I'm happy to say lots of drivers get that, but then again, some do not.

From all of the accounts I have heard, Greg was very friendly with the fans, which was part of what contributed to his popularity. The fact that we still talk of him with such reverence 13 years after his death is a testament to how he interacted with the public, not to mention his incredible driving ability. On pure talent alone, he is one of the best this sport has ever seen.

Of course, this is a great photo and story because Hinch grew up to become one of the elite racing drivers in the world, and that won't happen to everybody. But that doesn't mean a driver can't have an impact on someone's life. I don't subscribe to the "all athletes are role models" camp, but people do look up to them and if that helps someone aspire to greatness, in whatever they choose to do, that's good by me.

You don't have to be a famous person to have an impact on someone, all you have to do is give them some of your time. This picture is living proof of that.