Holy cow, I am blown away by how quickly this month has gone. Here it is three days from the race, and I am just getting caught up that it is May as it is. Which is unfortunate, because for a lot of reasons May is my favorite month of the year. Oh well, I'm going to be in the house at the Speedway on Sunday, and in the end that is all that matters.

But this year, the 500 isn't the biggest race I'm going to watch this year. Nope, that comes tomorrow when my son Matt runs the 4x800 for Aurora Central Catholic High School at the Illinois State Class 2A track meet to be held at Eastern Illinois University. 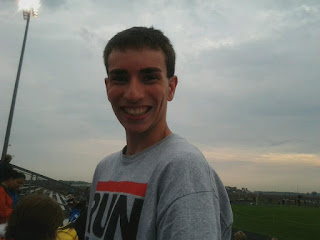 Can I brag for a moment? Thanks. It's such an amazing thing when someone you love works hard and succeeds at something. I am super proud of him. He and his teammates had worked so hard over the past year, and now he has a state track qualifier to his name to go with qualifying for the state cross country meet last fall.

They are the little school that could...sound familiar?

So there are two segues I can use from this story: first is that just like tomorrow, a year's worth of work will go into one race (or hopefully two if they qualify for Saturday's final). Matt decided after track season last year that he really wanted to dedicate himself to his running, and 2,000 miles of training later, he is where he wants to be. He ran a career-best 2:04 for his 800 leg in winning the sectional on Friday night, so he is ready to go.

The peeps in IndyCar have done the same thing. Since Memorial Day last year, no doubt the drivers and their teams have been working hard to figure out how to do even better on Sunday. Make no mistake, from the front to the back of the field, everyone wants to win this race. Lots of them have that chance.

Second, just like the movie Hoosiers, there is always room for the little school (or race team) to get a chance. Ed Carpenter, a native Hoosier, won the pole for Sunday's race and has a great chance to win the 500. For Carpenter, it would be a lifetime dream, and would add to the craziness that has become IndyCar racing the last couple of years.

Because let's be real, did any of us see Dan Wheldon winning the race in 2011? How about Dario Franchitti last year? After a putrid start to the season, Dario was slogging along all month with the Honda engine, then was spun by EJ Viso just 15 laps into the race and dropped to 29th place. Somehow he found his way back to the front and held off Takuma Sato in one of the best races ever run here.

Best races until this year, because I think with a year of experience (and if you count Fontana two 500-mile races) under their belts, the racing come Sunday could be epic...again.

So far this month, practice has given us a pretty good show, and that will transfer to the race. At least once a day during practice, a dozen cars (or more) would get together and it looked like it was the real thing with the passing and dicing that was going on. In fact, Marco Andretti radioed to his team at one point that he thought he was in the middle of the race by how hard the drivers were going.

Crazy. With Marco's name fresh on my mind, let's go through some predictions and story lines.

First, I'm sticking with my previous thoughts of the last few weeks that Marco Andretti will win the Indianapolis 500. In years past I don't know if those thoughts would ever come from my keyboard, but he was hella fast last year, and this year combines it with some calmer, smoother driving. One thing about the DW12 on an oval is that if your car is fast, you just have to stick with it and the car will take you to the front. You don't have to try so hard, which is what I think both Marco and Carpenter did last year when they spun late. Marco has been fast each of the last two years, but last year (well, in lots of years) he let his emotions get the best of him. This year he has proven to be a different guy, but it remains to be seen if he can stay that way when the pressure is on.

The weather. Thankfully, it won't be the blast furnace that it was the last couple of years. I know that I am a distance runner and all, but walking about six miles during the course of the day last year was a killer! Looking at the current forecast, it looks like it will be cloudy and about 25 degrees cooler, which is much more to the cars' (and drivers) liking. Cooler temperatures means a cooler track, which means the cars should handle a lot better.

Carpenter will be a factor. If I were throwing down odds, I'd set Ed as second to win behind Marco. Ed's fast when it counts, and don't forget he has an oval win in this car. Like James Hinchcliffe, if you are talented, winning once opens the door to winning again. With oval wins each of the last two years Ed's confidence has to be at an all-time high.

Andretti Autosport. With five drivers in the field, and all of them the Fast Nine in qualifying last weekend, there is a good chance one of them will win the race. Given past history, however, I'm thinking that should Andretti falter, two others: Ryan Hunter-Reay or Hinchcliffe, would be the ones to step up.

If you want to talk about drivers whose confidence is at an all-time high, look no further than RHR. After winning the championship in 2012 he's driving with the confidence and passion of someone who thinks they are one of the world's best, and right now he just might be. With two wins this year, Hinch is right there with him.

On the other hand, I don't see Munoz winning based on his inexperience, and Viso based on past experience. While I think EJ is slowing improving, I don't see him taking this kind of a leap. This race is won by winners, and I don't put him in that category quite yet.

Penske. One of the biggest story lines is the run for a fourth 500 win for Helio Castroneves. Since last winning in 2009 he has had little luck, including last year when he hit a loose tire from the Will Power/Mike Conway crash and had suspension issues all day. Is this his year?

I don't know, but I do know it won't be Power's. I feel bad when I write things like that about Will, but let's face it, he struggles in traffic on ovals. The only oval win he has (Texas) came in a race that he led almost the whole way and lasted about 45 minutes. I don't see him winning a marathon like this.

However, I wouldn't be surprised to see AJ Allmendinger in the mix. He's been fast all month and is experienced enough that he can run at the front. Plus I've got to admit to liking the guy, he has said and done all of the right things, and he gets it.

Dark horses. Maybe this is a bit of a misnomer, but it's a catch-all for everyone who I think can win but I haven't listed yet. And this list starts (and should end) with Tony Kanaan. It's crazy to look at TK's career and for everything he has accomplished it isn't accompanied by a Borg-Warner trophy. How many chances does he have left? Should he win it would be one of the most popular victories in 500 history.

While I don't see either of them winning, it wouldn't surprise me if Oriol Servia and/or Townsend Bell make a push to the front by the end. The same is true with Simona de Silvestro.

Hondas. I'll throw everyone in this group together too, because this is one of the great unknowns. If last year is any example, the Hondas will be better on race day, but the Honda peeps were hoping for the kind of weather they got last year, and that didn't happen. Still, Dario Franchitti topped the speed chart one day during practice and the Hondas did work well in traffic in practice. But outside of Alex Tagliani, who is starting P11, the fastest Hondas have nearly a dozen cars with Chevy power in front of them. This could be a taller task than last year.

With that in mind, you know Franchitti and Dixon will make themselves some sort of factor on Sunday. Dixon has completed every lap of the race since 2006 and has never finished worse than P6 over that span, while Franchitti is, well, Franchitti.

Bottom line. If we thought last year was the most wide-open in recent history, this year it is that times two. I could honestly see anyone from a pool of 20 drivers winning this race. Believe it or not, Sunday will be the 20th race run with the DW12, and in that span there have been 10 different winners.

But what will make this race memorable will be the passing throughout the field. I'm going to go out on a limb here and say we set a record for lead changes, and it wouldn't surprise me to see 40 of them by the time the day is through.

I also think the winning pass for the lead will also come within the final two laps, maybe even down to the last straightaway. Yeah, it's gonna be that good.

Last, and certainly not least, best wishes and Godspeed to the drivers and crews who will put it all on the line Sunday. And in honor of it being Memorial Day weekend, thanks to all veterans, past and present for their service, especially those that have made the ultimate sacrifice in defense of our country.