My Day at Monza

When I found out a couple of months ago that I would be going to Milan, Italy, one of the first things I decided I wanted to see was Autodromo Nazinoale Monza. Though I'm not a big fan of F1 (but I may be by the end of this post), I appreciate the history of its tracks, and Monza might be one of the most historic.

It is certainly one of the oldest, as racing started there in 1922, and actually has a similar story as Indianapolis, as during World War II it was left to decay but was resurrected soon after and racing resumed.

I am staying in the northwest corner of Milan, so it was a pricy cab ride over and back (about 55 euros each way), which in the end became very worth it. Once I arrived, I was surprised to find the circuit sits in the middle of a large park in the middle of town, and there is quite a lot of activity around there, with people walking, running and riding bikes.

I paid my 5 euros at the entrance, and the taxi took me down this long, tree-lined street to the track. My driver's English wasn't all that good, so he just dropped me off and I was kind of left to my own devices. It was actually pretty busy as there had been some racing there the day before, and a lot of people were there tearing down tents and displays.

I wasn't sure where to go, so I just started walking around. I figured if I went somewhere that I wasn't supposed to go, someone would be there to let me know. I walked towards the back straightaway and looked for places that I could get some good views of the track. 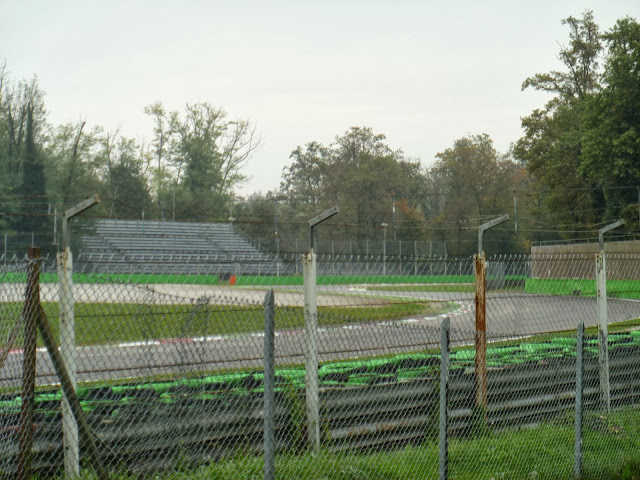 I worked my way over to Variante Ascari, which is the third and final chicane on the track and is named after twice world champion Alberto Ascari, who died in the section of the track during a testing accident in 1955. One thing I noticed about most of the seats around the track is that you don't see a long range of the racing surface, and the catch fencing makes sightlines a little poor.

I walked a little further down the back stretch until I got to another set of grandstands at the Parabolica, the last long, sweeping turn before the cars head back towards the start/finish line.

Working my way around the grandstands there, again I was amazed that because of the trees and the fence how little you can actually see. When the cars go by you don't get to see them for long before they duck behind some trees or around a corner. I guess I'm a little spoiled from going to oval tracks and being able to see large sections of the tracks and the racing. 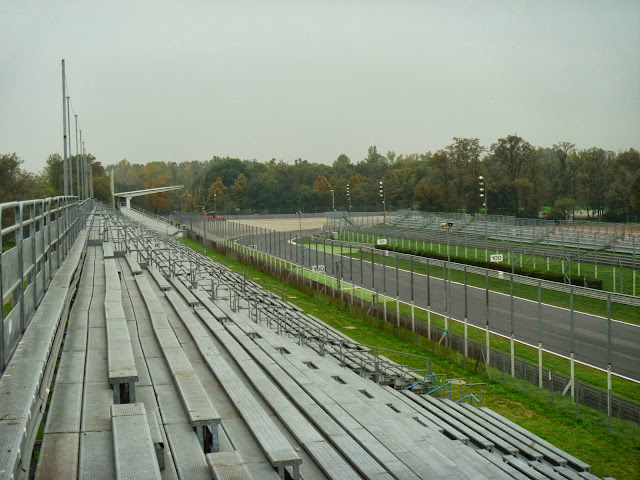 As I walked to the end of the far grandstand (the one with the roof), through the trees I could see the famous old banked part of the track. When Monza was renovated in the mid-50s, they built an "oval" track that was incorporated with the track already in existence. That was used until the mid-60s and is famously featured in the movie Grand Prix.

I really, really wanted to see that part of the track. It's old and is slowly decaying, but it is still pretty cool.


Behind these bleachers there was a gate that was open that led to a road that folks use to run or ride their bikes through the park. I looked down the road and saw that it went underneath the banking, so I figured I would walk over there. Walking towards it, the banking looks almost like a vertical wall because it is so steep. I looked it up and at just under 39 degrees, the banking is even steeper than that of Daytona (31 degrees and Talladega (33). 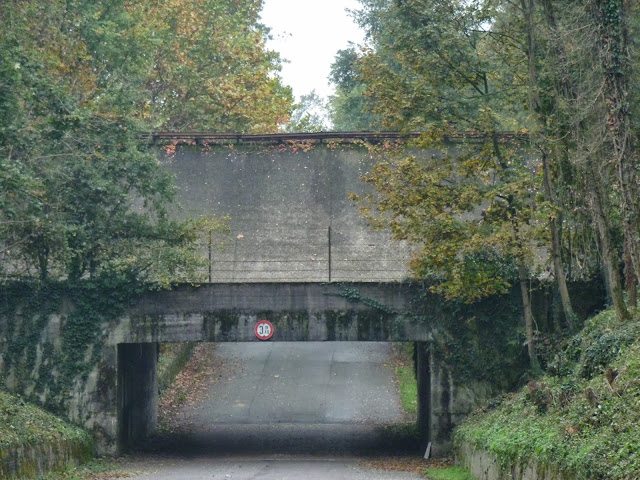 I could see some fencing along the edge of the track property, and there was some fencing at the overpass as well. Undeterred, I noticed along the fenceline (on the right side of the picture) that the grass had been trampled down to look like a little path. So I decided to follow it. As luck would have it, there was a section of the fence that wasn't there any longer, so I stepped in and was on the banking.

I hope no one is disappointed in me! ;--) Yes, I probably broke a couple of laws in doing that, but I wasn't going to hurt anyone and for sure was there out of respect! Looking back I feel a little bad about it, but at the same time it was pretty neat. Just don't tell anybody! 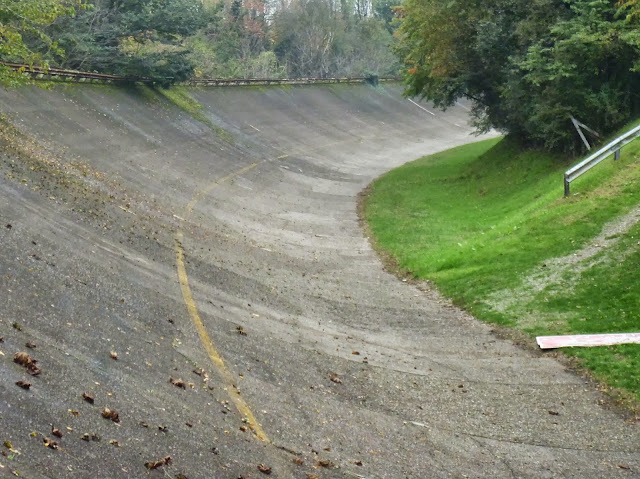 First of all, standing at the bottom, the banking is almost intimidating. I couldn't imagine what it would be like to go through that long, steep, sweeping curve in the era that portion of the track was being used, especially with only a guardrail at the top to stop you!

I tried to climb to the top of the banking, but it was too steep. Plus it was damp from an earlier rain and it seems kind of slippery anyway because of the moss and mold that is growing at the top. I got about halfway up and ended up sliding back to the bottom like I was on a sled!

Still, it was pretty awesome.

I just kept wandering around for a while and worked my way back to the center of the track behind the main grandstands, and finally I came up on the office, which isn't much of an office at all and the only signs pointing to it were right next to the building and so I hadn't seen them before. I went inside and told the person there that I was from America and was just looking around the track. Once he saw that I had bought a ticket and everything he was very kind and helpful.

Ok, sidebar. I know I have only been in Europe for a couple of days and have been in situations (like Heathrow Airport, hotels, taxis, etc) where people are pretty nice by nature and that it is part of their jobs. But outside of that what I have noticed in all of the people I've talked to, dealt with, or whatever, is that very few of them are wound very tight and most of them are cheery and laid-back. I like it.

Now, that might change after tomorrow night when I go watch AC Milan play Barcelona in a Champions League soccer match at the famous San Siro, but we'll see.

The other thing I like? People actually know how to drive over here. Sure, they drive hard and a little on the edge at times, but they seem to know what they are doing. And, I've been in a Mercedes, a Toyota hybrid and a Volkswagen four door, and I've noticed one thing...none of them have cupholders. Hmmm...

Anyway, he got out a map and said that since it was a maintenance day I couldn't walk on the track. First, a big bummer, but second, they let you walk on the track? Wish I'd known as I would've changed my plans, but I got to see a lot so in the end it was OK. He did direct me to the walkways where I could get into the main grandstands and a couple of other placed I hadn't checked out yet.

I said, "you mean I can just go over there and take pictures and stuff?" He nodded and said yes, almost like, "of course, why wouldn't we let you?"

Again, really? I don't know what the rest of the circuits are like in F1, but could you imagine walking into the Indianapolis Motor Speedway and them giving you pretty much free reign of the place? Now, I love the access they do give, and the ability to take track tours and stuff, but I couldn't imagine any track in this country just letting you show up, pay five bucks and walk around. 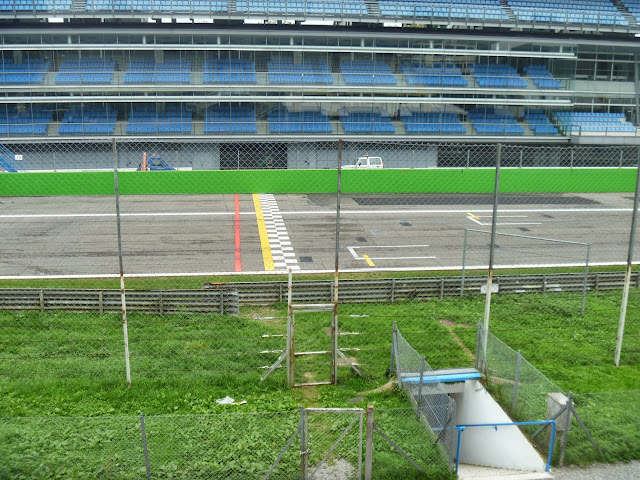 So I went over to the front grandstand and got some good pictures of the start/finish line, the garage areas and suites, and even the area where they have the podium ceremony. Good stuff. I'll put a couple more of those at the end of this post.

By this point I had been there for about 90 minutes and while I was pretty impressed, it hadn't blown me a way like I thought it would. It was neat and all, but outside of the old banked parts of the track, it was just another track to me.

So I headed over there and walked through the stands along the curve and turned to take a couple more pictures. It was when I took this picture that things changed for me. I sort of swept my eyes from the exit of the corner and down the main straight, and just fixated on that for a minute. It didn't take but just a brief moment for the track to all of the sudden come alive in my mind. 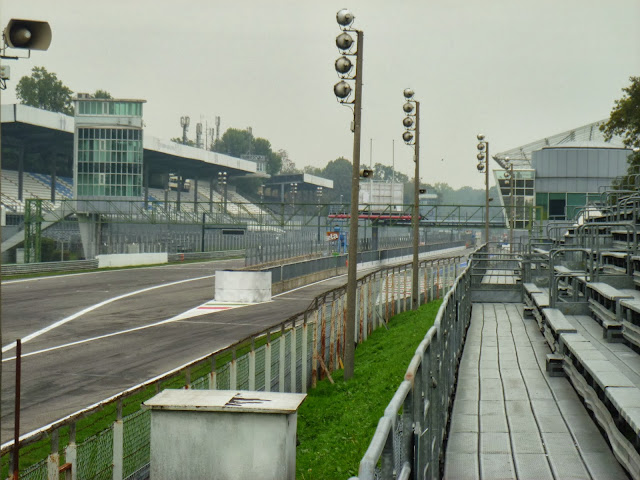 As I looked down the straight at the grandstands, a 90-year-old racetrack started talking to me. This was the moment that Autodromo Nazinoale Monza became a living, breathing thing, just like Indianapolis, or Wrigley Field, or any other stadium that has seen the amount of history that these places have.

I started thinking about what a race day looks like. When the sun is shining and the Italians have their horns sounding and their flags waving in hopes that a Ferrari driver can bring home the glory.

I started thinking of how on this very spot they have been racing cars for over 90 years, and how drivers like Juan Fangio,Jim Clark, Emerson Fittipaldi, Mario Andretti, Ayrton Senna, Michael Schumacher, among others, have driven there. It was where Niki Lauda made his dramatic comeback after his crash in Germany where he suffered his horrible burns, and of late has become a playground of sorts to Sebastien Vettel, who has won two of the last three races and may threaten Schumacher's record of five wins by the time his career is over.

I have wanted to travel to Europe since I was in high school, and the reason was to be able to see things that I had only seen in pictures and watched on TV. I'm finally here, and am getting the chance to see things and to know that they are real.

It was an emotional moment, because this was how I wanted to feel when I see things over here for the first time. I want to be moved and be able to appreciate how lucky, blessed and fortunate I am to be able to make a trip like this. I stood in that spot for close to 10 minutes just taking it in and appreciating where I was. It was a moment I will remember forever.

Here are a few more photos I took. Enjoy! 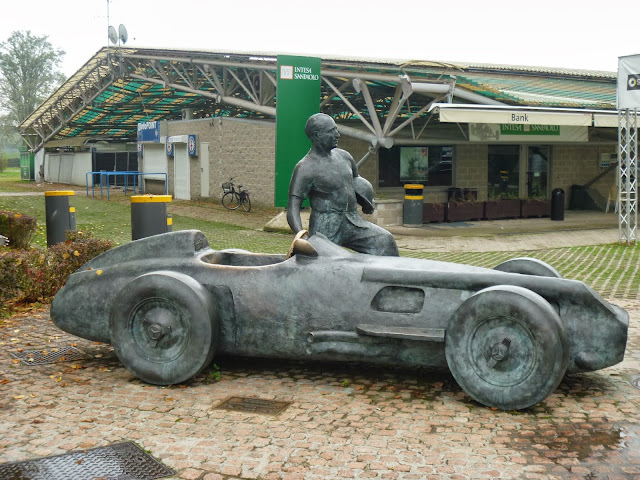 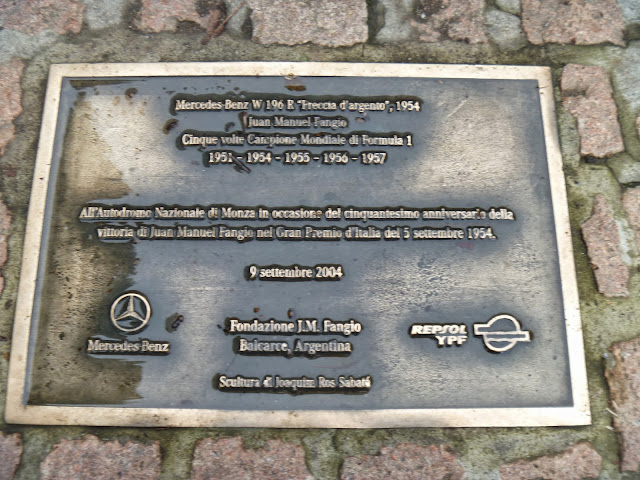 This was a statue and plaque dedicated to Fangio. 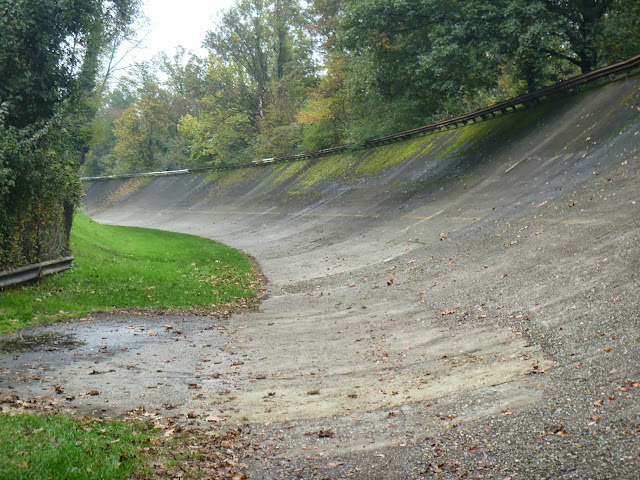 Another shot of the banking. 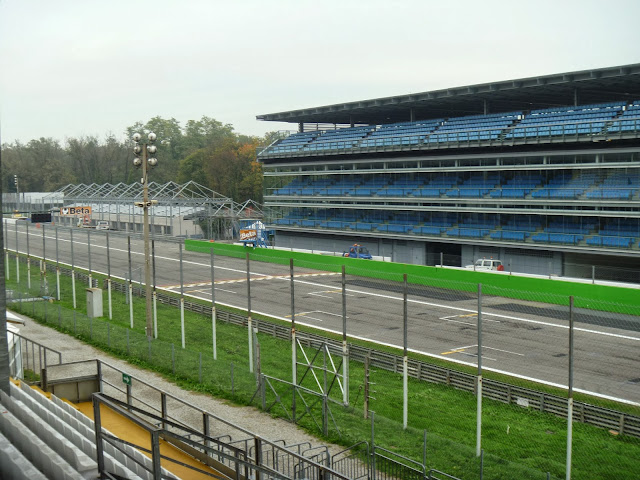 A look down the front straight at the start/finish line. 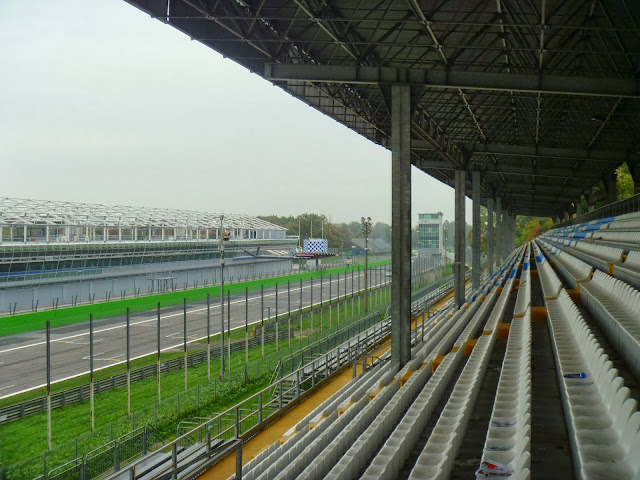 Looking up the track. 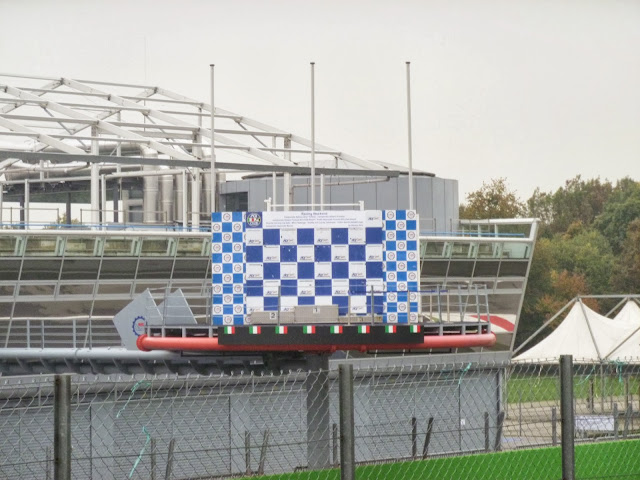 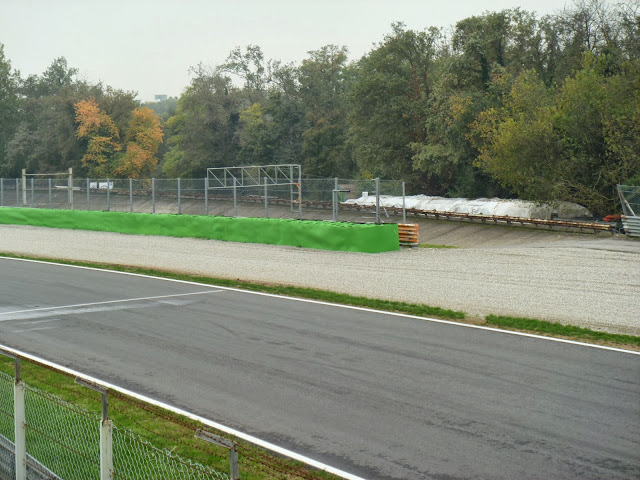 At the exit of the Parabolica, where the historic banking merges with the current racing circuit.