Getting the Band Back Together!

As dedicated readers of this blog know, I'm a big fan of late night movies. I mean, I love movies, but the late-night thing isn't really by choice, just necessity for a guy who has perpetual insomnia.

(Quick sidebar: I saw La La Land a couple of weeks ago. Thoughts? I loved it until the last 15 minutes, but then what a cruel twist. They should've been together, right?)

Over the last few weeks, one movie that has been heavily in the late night rotation has been Blues Brothers, the 1980 comedy starring John Belushi and Dan Aykroyd, who as brothers Jake and Elwood Blues have a dilemma: the orphanage where they grew up is set to be closed because they can't afford the $5,000 in property taxes. 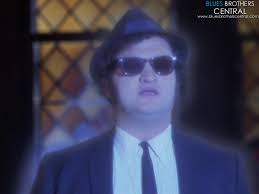 As anyone who has seen the movie knows, lots of hilarity ensues throughout the flick. One of the key scenes in the movie is when the boys go to a church on the South Side of Chicago, and during legendary James Brown's sermon and musical number, Jake (Belushi) sees a light from above that inspires him to get get the band back together, and put on a concert to raise the money.

Eventually they get the band back together, raise the money and embark on one of the best movie car chases of all time to get to the Cook County assessor's office in time.

So what does all of this have to do with me? Not a lot, but I thought it would be a good way to explain that I'm getting back into the game. Along with my duties with John Cummiskey Racing in the USF2000 series this week at St. Pete, I'm going to do my best to follow along with the goings-on with the IndyCar side of things, and do some reporting back in this blog.

I've been thinking for a while that I want to get back involved in sportswriting, and when it comes to IndyCar, you all know I can write about it all day!

Look for some content from me starting Thursday night. I'm excited and hope that it is the start of a little bit of coverage all season long.
Posted by Mike Knapp at 8:37 PM