Another weekend down, another step closer to St. Pete!

Of course, part of Thanksgiving is taking time to think about your blessings and things that make you feel thankful. I'm thankful for lots of things: a great wife and my blended family of four sons, my home, my health and the good health of my family, and my new dog, Boomer. 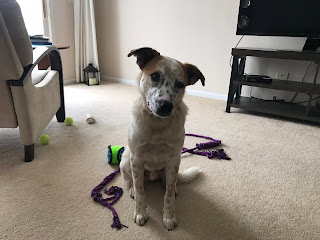 He is a rescue that we adopted three weeks ago. I've always been a cat person, but my brother has two dogs and I have become more and more attached to them every time I have gone to Atlanta for a visit.

I'd been thinking about getting a dog for a while but my wife and I had reservations. But, we finally took the plunge.

Boom is the first dog I've had since a family pet in high school, so we've had some challenges so far, but I am thankful he is part of our family.

Oh yeah, I know that it goes without saying, I am extremely thankful for racing!

I love racing, and I have for 40 years. Like any relationship, it's had ebbs and flows, but like baseball, it's just something in my blood.

So what are a few racing things I'm thankful for? Let me count the ways. 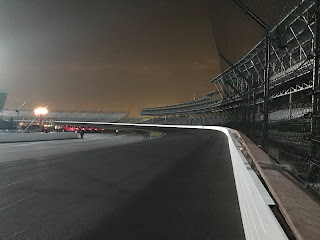 Indianapolis Motor Speedway/Indianapolis 500. For me, IMS is where it all began back in 1979, and I can honestly say there are very few days in my life since that I haven't thought about IMS or the 500. I lived in Indy from 1989-94 -- including a year just down the street from the track -- and I'll always have a few regrets about that. When Steve McQueen talked about racing being life and the rest was spent waiting, he was talking about how I feel about the Month of May. Waiting. Like many of you, Race Day is my Christmas, there isn't a better day of the year for me, especially every few years when the race falls on my birthday. My experience working with John Cummiskey Racing and Lazier Racing Partners the last couple of years showed me an IMS I hadn't experienced before, and allowed me to take a picture that makes me smile every time I see it. I hope to have the chance to take another one someday!

This year was my 20th 500, and has become a family tradition with my kids too. I look forward to someday adding grandkids to that too -- but not too soon! Family is what the 500 is all about, isn't it?

People who care. If you go back to the beginnings of this blog, you'd find several posts that were critical of IndyCar, team owners, and even sometimes IMS management too. I think if you look at the last 25 years of the sport, lots of that criticism has been valid. "How did we get here?" is definitely a question people who have followed the sport since the days when it featured full houses, massive sponsorship dollars and the stars of racing.

I'm thankful for the fact that right now the sport of IndyCar is in great hands. The arrival of people like Mark Miles and Jay Frye have been a huge boost to the sport. Finally we have people in charge who have a true vision of how this sport should grow, and they have assembled a core group of track owners who want their races to succeed.

Then on the IMS side, of course, is Doug Boles. In the five years Mr. Boles has been in charge he has played a huge part in once again turning the Indy 500 into the biggest motor race in the world. The secret of his success is that he loves the 500 as much -- if not more -- than the fans do, and he is a great steward for both the track and the race.

Racing friends. One of the hard parts about growing up in Central Illinois in the 1980s is that I didn't know anyone else like me. Most of my friends made fun of my love of racing, one of them came around about 15 years later, but the only person I knew who even had a passing interest in racing was my friend Tonya, who I should've girlfriended up as fast as possible based on that alone. I did take her to the prom -- shoulda tried harder.

Tangent over! Ever since I launched this blog in late 2010 and became active on social media, I've connected with people all over the world and have been able to talk about and share my fandom for IndyCar racing. Then in 2012 I was fortunate to have had the opportunity to participate in the Social Media Garage during qualifying weekend. It was so cool to finally meet people in person and talk racing.

I could go on and on listing the names of people I've met in the name of racing, but you know who you are, and I'm thankful for you.

I'll also give a special thanks to my best racing friend, my wife Darcy. While she doesn't know a lot about racing and isn't much more than a casual fan, she has gone to races with me, knows what it's all about, and most of all gets why I love it so much. One of Darcy's gifts is that she gets me in a lot of areas in my life, and she is totally supportive of my quest to somehow work in racing. I hope that it all comes together someday so I can repay her faith in me.

The IndyCar drivers. I think everyone who reads this has had several positive experiences with an IndyCar driver or two. That's one of the greatest things about this sport, we are allowed to get up close with the teams and drivers.

The beauty? All you need is a ticket. You buy a ticket, you get to meet a driver if you want to -- it's that simple! Indy is a different animal, but at any other stop on the series, if you want a photo or a chance to chat with an IndyCar driver, you can get one if you want to.

I don't throw a lot of shade at NASCAR, because honestly I spend very little time thinking about them. But when you see a picture at the track of people with drivers, don't forget that chances are they bought a ticket and paid extra for the access, or had a friend of a friend that got them that close to their favorite driver.

IndyCar drivers are available at the track, they are always out and about in Indianapolis, almost all of them are accommodating with the media, bloggers, and podcasters, and will do anything in their power to grow the sport. We can't ask for anything better.

I know a lot of people who would love to see the sport just explode into the mainstream. I don't. While I'm happy with the slow, steady growth we have seen the last few years, I don't ever want to see the days where drivers are secluded and unavailable to the fans. As long as IndyCar is profitable and healthy, I'm happy, just don't grow too big that the fans just become people who buy tickets. The fans and the close relationships they have with their favorite driver is the fabric of the sport.

Robert Wickens. I'm breaking Robbie out of the previous point because over the course of the last few months he has proven to everyone that he is just one special freaking person.

I saw Wickens' accident at Pocono live on television, and I'm OK with the idea of never seeing it again. While I appreciated all of the transparency that he provided us over the last few weeks, it really wasn't until he posted the word "paraplegic" in one of his Instagram videos that it hit home how badly he was injured.

But despite all he has been through, Robbie has shown nothing but a positive attitude and a determination that is no doubt inspiring to many. What I love about his videos is that he's always smiling and showing a positive attitude, no matter the situation.

Robbie is a helluva race car driver, and he more than proved that this season. He's also an incredible man who looks like he will dig as deep as possible to make the most of his situation. I hope he walks again, and in fact, I think he will. When I broke my humerus three years ago I dealt with nerve damage that left me with a drop wrist. I couldn't lift my left hand for seven months, and then I woke up one day and I could. The improvement was about a centimeter at a time, and it was almost a year before my wrist and hand started working like it used to.

This kind of stuff just takes time, and there are certain people in this world who can will themselves to almost anything.

I truly believe that Robbie Wickens is one of those people. I can't say if he will ever drive a race car again, but he will find a way to get 100 percent out of what he's given. I try to think about him a lot, as his story inspires me in my daily life.

So Robert, thanks for making a difference in my life, and that of lots of other people.

I could keep going on all of the things are thankful for, but what are a few of yours? I'd love to hear them!
Posted by Mike Knapp at 9:28 PM