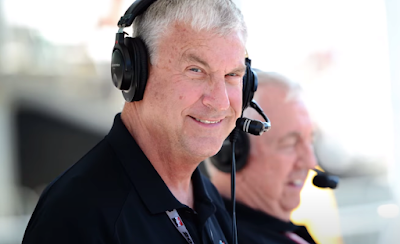 Like many of you, I was saddened to hear of the passing of Bob Jenkins this afternoon. Now that I am in my fifties, I think 73 is too young to die, and if Bob had been able to beat the brain cancer that he was diagnosed with eight months ago, he would've had many, many more years at the mic at the Indianapolis Motor Speedway.

But as with many of the icons of the Speedway before him, like Sid Collins and Tom Carnegie, his voice has been silenced forever. I wrote about the passing of Tom in 2011, and like Tom, though I never met him personally, I always thought Bob was my friend.

That's because he was very, very good at his job. He always said he was one of us who just happened to get a job in racing, and he brought that vibe every time he was on the mic, whether it was the biggest race in the world or a banquet the night before the Indy Mini Marathon.

He was also one of the voices of my youth. I took my first visit to the Speedway on Pole Day in 1979. From 1979-87, I got one day at the Speedway each year. One day! I mean, I more than made up for that driving by the Speedway every day when I lived at 30th Street and Lafayette Road in the early 90s, and over the last few years have been blessed to have covered the race and been a part of the 500, fulfilling my childhood dreams -- and then some.

But for those first few years, I had one day, and that one day had to last me the other 364 days. I had to rely on storytelling and picture painting, and all of that stuff you had to rely on before the iPhone, Internet and video boards.

People like Carnegie, Howdy Bell, Bob Jenkins and many others were responsible for giving me everything I needed for those 364 days I spent in Germantown Hills, Ill., wishing I were in Indy, or sitting on my bed in my room, imagining I was in one of those cars speeding around the track while they talked about me lapping the Speedway at 200 mph.

If you weren't there in those days, it was like a dance. Tom Carnegie was of course the Master of Ceremonies, but he had a capable crew with him. Tom's famous call of "Heeeeees...on it!" was only the start of a qualification run, the next three minutes were people painting a picture for us to see in our minds.

Like this: "Rick Mears is definitely on it as he takes two wheels to the white line in Turn 1. Mears drifts out to the short chute, about two feet off the wall, setting up for Turn 2. Through Turn 2 just under the white line with the left side tires and just off the wall as he sets up for the backstretch..."

And just in enough time to give his color commentator a chance to jump in, he delivered the goods: "And here's the time and speed report, it's a neeeeeewwwww, track record!" Then he would give us the numbers we'd been waiting for, just in time to pass it back to whoever was high up in the tower.

It was beautiful, and amazing, and something I was so glad that I got to experience.

Bob Jenkins was one of those voices I heard over the loudspeaker in those years, and as I grew older he was still that voice. The guy was everywhere! On the mic at IMS, Saturday Night Thunder, NASCAR, the Indy Racing League, and of course, IndyCar. I can't even begin to think of how many races, how many times I've been to IMS, where his voice hasn't come through my speakers.

He called some of the greatest moments in racing, none in my mind bigger than this one:

Again, listen to that dance, and listen to the love in the voices of the men who called those last two laps.

Because here's the thing about IMS: you can't be a phony. We can spot those kinds a mile away. That's why Bob Jenkins became such an icon -- he loved the race so much, and had such an appreciation. In a tribute video IMS released today, Bob referred to himself as "a race fan who got lucky".

No Bob, you had an amazing amount of love for racing and a talent that transcended everything, and you were kind, humble and generous. Most of all, you were one of us.