Indy Star racing guru Curt Cavin recently remarked in his Ask The Expert blog that his favorite Indy 500 was Jacques Villeneuve's 505-mile win in 1995.
That’s a pretty good call, and probably in my own personal top-5, along with Emerson Fittipaldi’s duel with Al Unser Jr. (1989) and Sam Hornish’s last lap pass of Marco Andretti to win in 2006.
But which race in the Mike Knapp Era (since 1979) is my favorite?
1993.

I had seats in the top row just past the apex of turn 4, still probably the best seats I have ever had. And because ticket brokering (is that the more PC term?) is legal in Indiana, I can say that I paid $165 for those babies, which had a face value of $45. 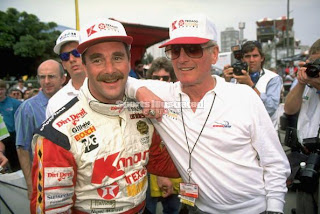 It was an exciting month. Nigel Mansell had come over from Formula 1 and won his first race on his way to the CART championship. It was the first time since 1958 that the race didn’t include A.J. Foyt, who abruptly announced his retirement on pole day after 35 straight starts. Rick Mears, who had also stepped down from his ride the previous winter, was absent from the field for the first time since his rookie year in 1978.

Even missing that star power,  the race included six former winners, and seven overall as Eddie Cheever would win the 500 five years later.
Another surprise was the front row qualifying effort of Raul Boesel, who gave Dick Simon Racing its first legitimate opportunity to win the race. Boesel took the lead at the start of the race and eventually led 18 laps, but served two stop-and-go penalties which sidetracked his day.
All told, 12 drivers led laps that day. Mario Andretti led a race-high 72 laps before finishing fifth, and Mansell, who had never run a race of longer than 200 miles, paced the field for 34 circuits.
Mansell drove brilliantly and led the race heading back to a restart with 16 laps to go. His inexperience with oval track racing and restarts reared its ugly head, though, as Arie Luyendyk and Fittipaldi whipped past him, with Fittipaldi eventually taking the lead and pulling away to win in just under three seconds. 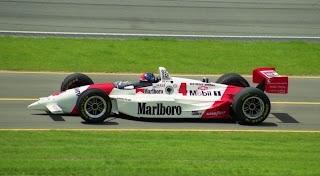 Fittipaldi, who almost went a lap down in turn 4 early, drove a patient race and was in front for the final 16 laps, which were the only laps he had led all day. He was fast when he needed it most.
Watching the race on YouTube recently, I was amazed at how fierce the racing was through the entire field. A total of 24 cars were running at the finish, and I believe the top eight finishers were on the frontstretch when Fittipaldi took the checkered flag.
Quite simply, this race was absolutely stacked. It included multiple 500 winners, multiple F1 world champions, past and future CART series champions and a slate of drivers who competed in the race more than 10 times. Without a doubt that field is on the short list of one of the deepest fields the race has ever assembled.

Arguably, CART was the premiere racing series in the world at the time. If you won a race around that time, you had to beat many of the best drivers on the planet.
For me it would be the last 500 I would see in person for seven years, as I moved away from Indy early the next year and started a family, then put the race on the shelf along with many others when the split happened in 1996.
I'm glad I came back, and I think that the series and the particularly the Indy 500 are making a comeback as well. Can it ever return to those glory days? Probably not, but it's something to reach for. And if you ever want to show someone what open wheel racing looks like when it is at its best, this is a good place to start.
Posted by Mike Knapp at 1:40 AM