Like many, the Speedway is special to me...a living, breathing place that has been a part of my life since I was 10 years old. I have so many memories, of waking up on Pole Day and driving down from Peoria, IL, living just a mile from the track for a couple of years, so close that I could hear the roar of the cars and when teams tested in the spring I'd jump in my car to run down and watch. I've had so many great times with family and friends, and in the end those are the best memories of all.

It's a tough choice to narrow them down, but I'll do my best and add four of mine...
﻿
﻿
-- Pole Day, 1979. My first trip ever to the Speedway with my Dad. Like so many, he had his own Race Day tradition, washing and detailing his car while he listened to the broadcast on the radio. He had a passion for the race for 30 years before he ever set foot on the grounds, and that passion was passed along to me that day. I was hooked from the moment we walked in the old entrance at 16th and Georgetown. Rick Mears made a late-afternoon dash to capture the pole at 193 mph, and went on to win the race for the first time two weeks later. That was the start of his own personal dynasty, and that's when it all started for me, too. I still get the same feeling as I did that day every time I walk in the gates.

-- 1988. After going to Pole Day for close to a decade, I finally got the chance to experience my first race, and it was everything I thought it would be. I sat in the short chute betweens Turn 1 and 2 on a warm and sunny day, and every single color just popped in vivid glory. Danny Sullivan dominated the first half of the race, but Mears took the lead on lap 123 and never gave it back to win for the third time. The 2011 race will be the 13th time I've seen the 500 in person. 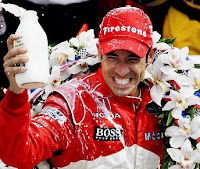 -- 2009. Helio Castroneves had spent the first few months of the year fighting for his freedom while he battled legal issues in a federal court in Atlanta. Cleared of the charges, he went to Indy looking to catch up on lost time and to find his happiness again. His pole position and third 500 win more than gave him his mojo back. I was going through a tough time then as well, and as usual the month of May lifted my spirits. It was a great way to celebrate my 40th birthday with my good friends Kevini and Joe. Knowing what Helio had just gone through, I could relate and was rooting for him as hard as ever. Helio doesn't know it, but he won that race for me.
-- 2010. I brought my two boys to Pole Day for the first time, passing the 500 down to them the same way my Dad did with me. We went to time trials together for 15 straight years, and I wouldn't trade those days and those memories for anything, especially now that my Dad is gone. The kids loved it (thankfully!) and have talked several times since about how they can't wait to go again. I'm hoping that I've started a new tradition with them!
Posted by Mike Knapp at 12:21 AM