Greg Moore and Indy...What Did We Miss Out On? 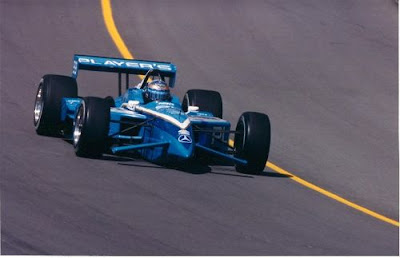 I don’t know why this is, because my interest in racing was waning a bit at the time, but Greg Moore’s death in October, 1999, hit me about as hard as the sport losing a driver ever has in my lifetime.

I’m sure part of it was the fact he was only 24 years old, that the way he lost his life was so violent (his car was pulling 154gs at the time of impact) and that a career was full of so much promise was quickly ended at the exit of turn 2 on a Halloween afternoon in Fontana, Calif.

Moore was a great talent, he was as popular with his fellow drivers as he was the fans, and his upcoming move to Penske Racing to start the 2000 season was going to propel him to the next level of the sport. With Penske’s backing, and the fact that Roger himself was going to call his races, Moore was more than likely set to become a flat-out dominant driver.

One of the biggest shames is that he never drove in the Indy 500. Given his success on ovals, Indy was probably a perfect fit for him.

In a John Oreovicz piece that appeared on ESPN.com in October, 2009, here’s what Dario Franchitti had to say about Moore’s talents:

"I think Greg was the best guy I ever raced on an oval," Dario said. "He was unbelievable in those [CART] cars. You can slide a modern [IRL] Indy car around a bit; there's a certain sort of yaw you can drive it in, where it's not too much of a problem. But the old Champ Cars, they would slide, and if they slid once and you didn't catch it, if you allowed it to snap again, it would bite you. And Greg could just hang that thing out there all day! He just drove the thing on the edge, and I don't know of anybody else that did that."

It is that kind of style and bravery that would have made him tough at Indy, but unfortunately his path didn’t cross with the Brickyard. His first season in CART, 1996, was the year of the acrimonious split with the Indy Racing League, a divide that wasn’t first crossed again until 2000 when Chip Ganassi brought his team back – and won – the 500 with Juan Pablo Montoya.

Had CART continued coming to the 500 during his career, I think Moore would have cashed in on one of what looked like four opportunities he would have had at the Speedway. His first year, his Players Forsythe team was the defending champion, so that would have given him at least a decided schematic advantage (to use a Charlie Weis phrase).

Plus, he won on an oval in each of his four seasons, and each one (Nazareth, Milwaukee, Rio, Michigan and Homestead) has its own distinct configuration and personality, meaning he had a good idea how to figure out a course and its nuances.

Then you can play the “what if” game. What if Moore had been able to move to Penske and run the 500 under those colors?

That’s the environment in which he would have driven, and Moore’s talent would have done the rest. While it is hard to predict how many years he would have stuck around the series, it’s safe to say he would have run the 500 enough times and contended enough for poles and wins that he would have collected some serious hardware.

It's just unfortunate we didn't have the opportunity to find out.
Posted by Mike Knapp at 10:46 PM