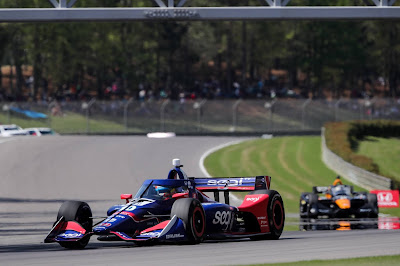 The long off-season is officially over and the first race of the 2021 IndyCar season is history. We were definitely treated to a great race and if the rest of the year goes anything like this, the future is now.

Here are a few highlights.

Palou With the Win: Entering this season, there were a handful of drivers who could very well get their first win in 2021, and after signing with Chip Ganassi Racing at the end of last year, Alex Palou shot his way up that list. He got the first one out of the way quickly, with a dominant effort that saw him lead 56 of the 90 laps on the day. Make no mistake, there are more wins out there for the 24-year-old Spaniard.

O'Ward's Day Will Come: Pato O'Ward was another driver on the list of first-win potentials, and he showed what he had this weekend as he captured his second career pole and led 25 laps. Eventually he finished 4th on the day but I'm going to predict O'Ward as our second first-time winner next week at St. Pete.

Biggest Movers: If you listened to my podcast this week (and if you haven't, why?) I predicted Sebastien Bourdais would be this week's winner. That didn't happen, but he finished a solid P5, moving up 10 spots from his original starting position. I think his partnership with AJ Foyt Racing may be a good one, and he gets a "home game" at St. Pete next weekend, a place where he has won twice and was P4 in a Foyt machine last fall.

Also making a big move was Graham Rahal, who improved 11 spots on the grid to finish P7. After qualifying P2 the last time the race was held at Barber two years ago, it was a disaster of a Saturday for both Rahal and teammate Takuma Sato, who went from the pole in 2019 to P19 this weekend. Rahal bounced back and topped the speed charts in the morning warmup and showed good speed in the race.

Rinus Veekay started 14th and improved eight spots to finish P6, but had an interesting day. He was involved in the Lap 1 incident with Newgarden and others, and was moved to the back of the line after the subsequent yellow for pitting for repairs when the pits were closed. So to bounce back from that was a good effort for the young driver.

Championship implications: I saw a few people commenting that speculating about the championship after Newgarden's first-lap incident is a dumb move, but his last-place finish and six championship points is definitely an ouchie. Scott Dixon has said before that if he's within 100 points he still feels he has a chance, but Newgarden is down 47 points right out of the gate. He has two things going for him, though: one, he's great at St. Pete and two, he has 16 races to dig himself out. No, this wasn't a killer for him, but he has to flip the script next weekend for sure.

The Rookies: Romain Grosjean, Scott McLaughlin and Jimmie Johnson all had (mostly) incident-free days, so chalk it up as a positive for all three. Grosjean feel three spots from his starting position to finish P10, while McLaughlin fell two spots from his grid position to P14. Johnson did spin early in the race and brought out a quick yellow, but he didn't hit anything and got the car going again, and finished three laps down in 19th place. Johnson is still running a little off pace, but he's going to eventually figure it out.

Have you listened to my interview with this week's winner, Alex Palou? If not, check it out here!
Photo credit: Joe Skibinski/IndyCar Media
Posted by Mike Knapp at 10:00 PM