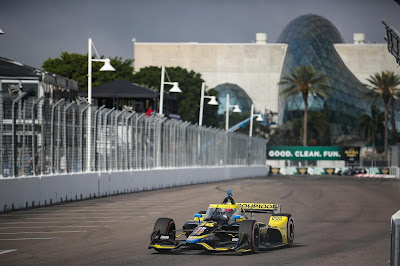 Talk about flipping a script!

For the most part, what happened Sunday at St. Pete was the exact opposite of what happened at Barber the previous weekend. If the IndyCar series is anything, it's certainly unpredictable.

Here are a few takeaways.

Go Grab a Rebound. After not even making it to Turn 5 of the first lap last week in Alabama, before having their races ruined, Colton Herta and Josef Newgarden both needed a big weekend at St. Pete to turn it around, and they delivered. Newgarden, who had one the two previous events in the FLA, led both practice sessions and finished second, while Herta won the pole and dominated the race, leading 97 laps and only giving up the point on pit stops. At 21 years old, Herta now has as many wins as his dad, Bryan, who was on the box giving him the calls on Sunday. Herta has now moved up to fourth in the points, while Newgarden has improved to 10th.

On the flip side, first-time winner Alex Palou came home in 17th place and Pato O'Ward, who won the pole at Barber and finished fourth, had an awful day and finished

Paging Mr. Rossi. Two weeks ago, I was calling Rossi our 2021 champion, and today he sits 16th in points behind rookies Romain Grosjean and Scott McLaughlin. He started 11th, which had potential, but lost his head during the race and got caught up in a bit of a spitting match with Graham Rahal mid-race. Since the start of last season, he has as many finishes of 20th or worse (five) as he does podiums. A checkered-flag-or-crash trend that isn't going to win championships anytime soon.

Biggest Movers. The drivers that finished in 6th, 7th and 8th place were all the biggest movers on the day. Will Power, who has been dominant on the Streets of St. Pete over the years, spun in the first round of qualifying and started in 20th place. He was able to methodically pick his way through traffic and improved 12 spots to finish 8th. Meanwhile, Takuma Sato had one of those days where people question their friendship with him, being involved in a couple of incidents and near-incidents, but his hyper-aggressive style moved him up nine spots from 15th to 6th. (Editor's note: I kid, everyone loves Taku, some probably just don't like him right now.), and Marcus Ericsson improved from 16th to 7th.

Edit: Thanks to IndyCar PR wiz Arni Sribhen for this one, but Rahal has passed a total of 28 cars over the course of the first two races -- 14 in each one -- which leads the league and is very deserving of mention.

I also want to give some props to Grosjean, who moved up from his 18th-place starting spot to 13th by the end of the race. That came after knocking down a couple of walls on the same lap early in the race and being gently suggested by his team that he stay out and keep driving. As an avid watcher of Drive to Survive, I can guess that had he done that in F1, his team more than likely would have brought him in and retired the car. Given the heat and driving a car without power steering on a very tough road course, I'll give him props for deciding to stay in the fight and compete. He was absolutely exhausted at the end of the race, but he had a smile on his face, so he's still loving IndyCar!

Home game. It's rare for racers to get to play a home game, but most of the field will get to do just that when they head to Indy in a couple of weeks. For Sebastien Bourdais, he got his home game on Sunday. He loves living there and the streets have been good to him, as he's had some great results there in the past, including two wins and a 4th-place finish last October. While Sunday was a bit disappointing for him, as he qualified fifth and finished the day P10, he's still P6 in points and looks to be revitalizing AJ Foyt Racing.

Sad news, everyone. After this weekend's doubleheader in Texas the season will have already reached it's quarter point. Don't be sad, be happy that it's happening. And besides, in just a few days it's gonna be May!