Look Who's Back! (Maybe)

There are rumors, reports or otherwise wishful thinking that have Sam Hornish coming back to run the Indy 500. While these rumors have been around since he left for the greener (pun intended) fields of NASCAR after winning the race and series championship in 2006, they seem a little more plausible this year, given his lack of sponsorship and funding for the 2011 Sprint Cup season. 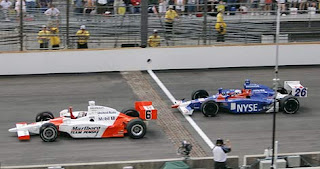 He certainly would have options as several teams will have one-off opportunities to run cars at Indy. Of course the best scenario would have Hornish reuniting with former boss Roger Penske and making May a 4-car effort in that stable. With the massive amounts of sponsorship he has secured for next season with the likes of Shell Oil, Verizon and Meijer, Penske would have the funds to do it, and do it right.

If coming back to Indy is a goal for Hornish, he should only do it if he has the potential to win the race. Otherwise it would be a waste of his time.

What would be great for Hornish, and not to mention the IndyCar series, is that it would hopefully represent a precursor to his returning to open wheel racing for good sometime down the road. While I wouldn't call his move to stock cars a "failure" as he has become a solid and respected racer in Cup, there are two facts that are undeniable: 1) unless something changes he will always be a mid-pack driver who will win few (if any) races, and will more than likely never contend for a championship and 2) he's an open wheel guy. It's what he is good at.

Contrary to popular opinion, Cup isn't the standard to which drivers should be measured. Coming back to open wheel racing isn't a demotion. For Dario Franchitti it was revitalizing, and his performances over the last two years has vaulted him into the list of the best drivers on the planet.

I'm sure he makes gobs of money doing what he does, probably more than even what a championship is worth in the IndyCar series. And if he is content with driving around in circles and picking up a check, more power to him. But he's still only 31, and could pick up another 500 win and a championship or two before he was done.
Posted by Mike Knapp at 12:54 PM