The guy is total entertainment on the track and it looks like he might be just as much fun to watch when he is at the keyboard. Blogging for the first time on the IndyCar website, he pulls very few punches.

Scheckter has a lot to say on several different issues, and while he is on point with some things and a little off on others, I like the fact that they are his opinions and he is willing to throw them out there. And I think in some places he truly gets it, what this sport is about and what the fans want to see. A quote I particularly liked: 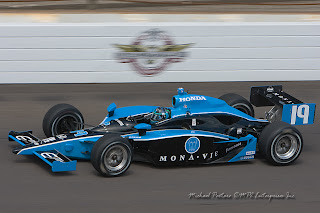 "I fully understand that racing is expensive and sponsors want a certain image but I think for the overall popularity of the sport everyone needs to loosen up."

I agree 100 percent. I think one of the reasons the fans are losing touch with the drivers is because they are all so afraid of doing or saying the wrong thing that they come across stuffy and uninteresting. By all accounts, five-time NASCAR champion Jimmie Johnson is very funny and a great guy to be around in private. So why is he so boring when it comes to the image he projects in public? Why is it when he does express a point or opinion it sounds so fake and forced?

Because his bosses told him he had to be so that he doesn't piss people off. I agree with keeping your nose clean in order to not embarrass your team, sponsors or yourself. That goes with any job. Even I have that responsibility to my employer. At the same time, that shouldn't mean you have to be completely devoid of a personality.

Maybe TV suits and sponsors like it, but being boring is one element to the decline of the sport. Sponsors pony up the cash, I get that, but the fans and the passion they show are the reason they decide to invest the money in a certain driver or team. When that passion evaporates, ultimately the sponsors feel it's not worth it and walk away.

I don't want people to be phony, but I think in this new era of Indy cars I want to see people who are allowed to be themselves. Here's a tip...people don't get as offended when people speak their mind as much as the media and other powers-that-be might think. No, it's not an excuse to act stupid or use your fame as an outlet to project your beliefs on others, and it's not a place to throw people under the bus when things don't go your way. But you should be able to honestly say what is on your mind.

Outside of his odd observations of the Austin Powers-type free love lives of a couple of 1970s-era racers, Tomas said nothing that I would find offensive. Did he rankle a couple of people? Sure. But was anything he said (outside of his comments on Graham Rahal, which he could have left out) not true? I don't think so.

To me, I think his blog post would make him more fans as opposed to losing them, and overall my testing of the waters -- especially in the Twitter world -- give me the impression that most people's opinion of what he wrote was very positive.

I think what he did is that he expressed EXACTLY what the fans want. They want cars to go fast and they want people that they can root for, that they can live and die for each weekend. That when the circus comes to town they want to be a part of it and want to be up close to their favorite drivers and cheer like hell for a couple of hours because it is fun.

Let me repeat that: it's fun!

Going fast (safely) and getting people excited is the formula for getting the world to stand up and take notice. That's where Tomas nails it.

I don't want to root for a corporate entity, I want to root for a guy (or girl) that shows the same passion I have for something. I want them to love racing and approach race weekend the same way I do, and that is to see my favorite driver win. Not cruise around in a "top-5" car and get out and hold up a product and say the right things. That's boring, and that is why there is a "lost generation" of race fans, people who have found the sport dull and moved on to something else.

Sports and athletes are supposed to be inspiring. That's why we watch in the first place. If I wanted dull and mundane I'd watch tapes of myself.
Posted by Mike Knapp at 11:29 PM