I have seen this picture of an exhausted Bill Vukovich collecting himself after winning the 1954 500 a couple of times and it is just amazing. From the Indianapolis Motor Speedway photo archives, it was posted recently on their blog. 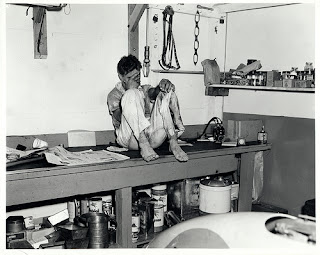 This photo just totally captures what racing was like for drivers of that era, and the effort it took to drive one of those cars. Though they were beautiful to look at, they were a beast to drive, and the track, which was a combination of the original bricks on the front straight and asphalt the rest of the way around, was rough and the driver felt every single vibration the surface put on the car.

Battling your own car lap after lap probably took almost as much of a toll as battling your competitors!

All told, Vuky spent three hours, 49 minutes, 17 seconds behind the wheel that day. He only made two pit stops, the last coming on Lap 128, and led a total of 90 laps.

But it's obvious the incredible physical toll that the race took on him, and most of the other drivers probably felt the same way. I was watching some highlights on YouTube and even the drivers who gave way to relief and didn't even complete the race distance were spent when they got out of the car. The sport was so primative compared to today, from the technology to even something as simple as on-board hydration for the driver. The men who wheeled those cars were tough, and the 500 was truly an endurance event.

Vuky might have been tougher than them all. The fact that in his career he never gave way to a relief driver, despite the oppresive conditions he faced in a couple of years, is an indication of his iron will and competitive nature.

But to me the biggest thing the photo represents is that winning the 500 is hard. Barely one out of every 10 drivers who have ever turned a lap in the race have made it to Victory Lane. Bill Vukovich might have been one of the finest drivers in the world at the time he raced, and it still took every ounce of what he had to win.

While much has changed over the years, what it takes to win the 500 hasn't. It might "look" easier, but it isn't, it still takes all of a driver's heart, soul, will and courage. That is what makes winning one so special.
Posted by Mike Knapp at 2:19 AM