Ralph DePalma has always been a driver that has fascinated me. By all accounts, he was one of the most dominant drivers of his era, and was a front-runner in several of the earliest runnings of the 500, leading 612 laps (second-most all-time) and winning the race in 1915.

According to his bio with the International Motorsports Hall of Fame, DePalma won more than 2000 races in his career, and is credited with winning four consecutive AAA dirt championships between 1908-11, as well as overall national championships in 1912 and 1914.

Of course, the race that made him famous is one that he didn't win. After leading four laps and placing sixth in the inaugural 500 in 1911, DePalma surged to the front on Lap 3 in 1912 and powered his way to a six-lap lead when his Mercedes cracked a cylinder and slowed to a stop at the top of the front stretch as he neared the end of Lap 198. 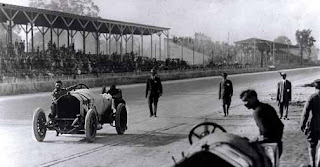 As the car began dying, DePalma reportedly looked over to Rupert Jeffkins, his riding mechanic that day, and said, "I guess it's time to start walking, and we might as well take the car with us."

They jumped out of the car and began pushing the 3,500-pound machine down the front stretch. Dawson made up the more than 15-mile deficit and finally passed DePalma to win the race, setting a still-standing record for the fewest laps led by a race winner (2). DePalma, on the other hand, has one of the most dubious records in the race's history for having led the most laps for a non-winner (196).

DePalma was credited with 12th place, which back in those times meant he earned no prize money. However, how he lost the race and the headlines it created is credited with helping drive the early popularity of the 500.

Through his disappointment, DePalma still offered Dawson his hand in congratulations after the race was over. From everything that I have read about DePalma, I admire him most for his sportsmanship. Along with his immense driving ability, his integrity and his graciousness, whether in victory or defeat, is something historians believe made him one of the more popular drivers of his time, not only with the fans but his fellow racers, who also respected him for his intense but clean racing.

His driving career eventually spanned 27 years and he was still competing into his early 50s, something almost unheard of in that era. DePalma also set a world land speed record of 149.875 mph in 1919.