For once I'm on time! It's 2:20 and I have taken up residence in the Social Media Garage at the Indianapolis Motor Speedway. After having met my contemporaries, I am wired in and getting ready to go.

The Social Media Garage is tremendous. There has been a steady stream of people since I have arrived and there are plenty of interactive activities. We bloggers have our own corner "leisure area" with all sorts of things like Internet access and the track feed in HD. Way, way better than watching it online live I've done all week.

So as of right now, the weather is perfect for watching cars and people. It's 78 degrees and the humidity is low so it is very comfortable. If we get this all this weekend -- and next -- I will be very, very happy!

Nobody has been on the track much so far, as Josef Newgarden is working on his 30th lap of the day as I type, which is the leader for the day. I expect the track to be very busy between 4-6 p.m.

I'm heading out to take in some sights. More later!

Just about 30 minutes away from Happy Hour! It's up to 84 degrees and there hasn't been a lot of action on the track as everyone looks to be waiting to turn it loose when the track cools in a little bit. Took a lot of photos -- did I mention I have one of the coveted Silver Badges? -- and will have those posted in a bit. Here are a couple that I liked. 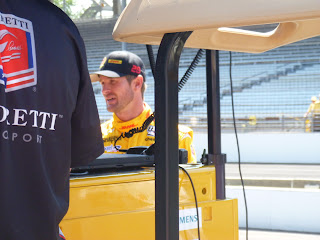 I was about to post that this guy was the man to beat today, but Ryan Hunter-Reay now stands second on the speed chart at 226.227 mph. Sometime between taking this photo and getting hooked up in the Social Media Garage, teammate Marco Andretti popped a 227.540!

RHR has been fast all week (actually all season) and Andretti Autosport looks to be the team to beat. But, rumors are abounding that Team Penske and Bryan Herta Autosport have been doing a lot of race setups and are holding out the big guns for tomorrow. 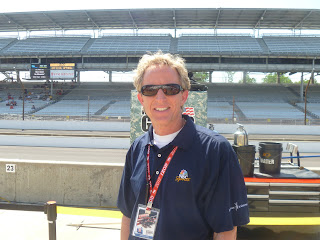 Although this exchange lasted about five seconds, Jon Beehuis (AKA The Professor) is as nice as everyone says he is. 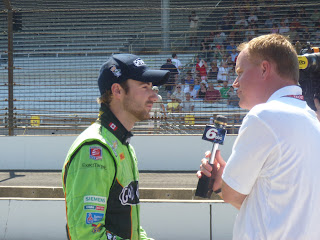 James Hinchcliffe has been fast all week. Hinch is fourth-quick at 225.974.

Just a few to get you started. I'll find a way to post the rest on my Facebook page or otherwise on line. See you after practice!

Not a lot of action in the final hour of practice, as Marco's speed held up for the rest of the day. Ryan Briscoe got a late tow and moved up to second at 226.835. Still, it's always great to be at the Indianapolis Motor Speedway. You never know who you might run into! 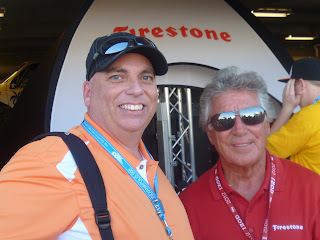 Yes, that's me with the Godfather of Speed, Mario Andretti! Just for that it's been totally worth the trip down here!

The qualifying draw is going off in a few minutes, so we'll see who gets the prime spots in the line. It's going to be a hot one tomorrow, so the drivers going off in the first hour might have a bit of an advantage.

Look back later on tonight for my wrap-up of the day!