When I Think of the Term "Strategic Alliance"...

...I think of a couple of factions joining up to invade a small country.

But not in this case. Instead, Panther Racing and Dreyer & Reinbold Racing have decided to partner up for the rest of the 2012 season. Officially called Panther DRR, the teams will work together at Panther's Indy-based shop and share information on and off the track. In effect, Panther's JR Hildebrand and D&RR pilot Oriol Servia are now teammates.

It should work well, but even if it doesn't, if the only thing that comes from this is the badass logo you see to the left, it will be worth it. When do the t-shirts go on sale? Because seriously, I would buy one.

Actually, I believe this will be a great partnership. It's just tough to be a one-car team in this era. Information and data are so important, and if you can only put one car on the track, the multi-car teams are leaving you behind. Penske Racing or Target Chip Ganassi Racing can get multiple times more data in a single test session than a one-car team can get in a week.

I think the most vital part of this exchange is the pairing of the drivers involved. Servia has an engineering degree, and Hildebrand was set to head to MIT before deciding to pursue his racing career. Both are very cerebral drivers who think their way through races, and in that sense they totally speak the same language.

Hildebrand is off to a great start this season, sitting in a three-way tie with Ryan Briscoe and Takuma Sato for seventh in points as we head to Indy, and two heads are way better than one in May. What helps Servia the most is that he will get the golden ticket -- ahem, a Chevy engine -- as part of the deal. He flashed more than enough skill last year to show that he can be a winner in the IndyCar series -- and to some he actually was the winner at New Hampshire -- and while he drove one of the more gorgeous looking cars on the grid this year while repping the Lotus engine, his talents were certainly being wasted as he is currently tied with Justin Wilson 16th in the season standings.

This should be interesting, but then again, it's May, shouldn't we know that by now?

*Texas Testing: A handful of teams were at Texas Motor Speedway today for a final check of the aero package they will be bringing to the track for the June 9 race. Scott Dixon was fastest on the day at just over 212 mph, but a couple of other interesting items came from the test.

First, according to this from the IndyCar website, the drivers feel much more comfortable with the DW12 now and some of the worries of high-speed pack racing have dissipated a little bit. The new package took some more downforce off of the car to make it a little harder to drive, and as Dixon and Briscoe put it, there will be more challenges for drivers in long stints and late in the race.

The idea of drivers actually having to use their skills to drive a car? What a concept!

Also noteworthy was the fact that Rubens Barrichello passed his oval test and is now ready to head to Indy and beyond. He was the slowest of the 10 cars that took the track at 204 mph but became a little more comfortable as he went along, but still admitted later he still had a lot to learn. It certainly doesn't get much easier come Sunday when practice opens at the Speedway, and while I'm guessing his qualifying effort will be on the very conservative side, he will use the lessons learned well on race day.

*Oh yeah, one other thing that came from the Texas session. Ed Carpenter was second fastest. The buzz is building that Carpenter has a shot to win the Indy 500, and given the way he finished out last year (a win at Kentucky and a third-place qualifying effort at Las Vegas) and tested today, how can you say no? He started eighth the last two years and led three laps a year ago. It's no secret that the 500 is what his team is centered around, and it just might be his time.

*Jean Alesi. I'm not even touching that with a 10-foot pole. Just saying.

*Jay Penske and Dragon Racing suing (s)Lotus for $4.6 million. Another topic I'm leaving alone. Only a lawyer could explain that and I'm not one.

*One more thing. Despite being a huge race fan, I don't consider myself a "car guy". Except when those cars become more and more like Indy cars in terms of power and performance. So I was really excited over the weekend when I attended a reception at the Gold Coast Bentley dealership in Chicago. The dealership actually featured several Bentleys, Rolls Royces, Ferraris and Lamborghinis, not to mention a Bugatti that was front and center on the showroom floor.

Still, this one was by far my favorite. I'm not sure what model this one is called (can someone help me out?), but what a beautiful car! It had that kind of primer black look and looked fast just sitting there. 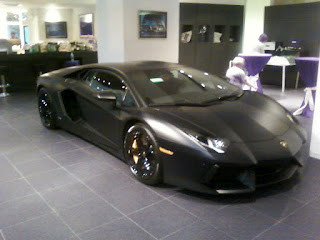 The Bugatti looked nice too! A British gentleman who was at the party (and I trust Brits when they get to talking about performance automobiles) said its 16-cylinder motor pushes that car from 0 to 100 in just 2.9 seconds! 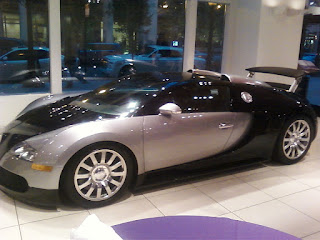