In my post last week about my first trip to Indy in 1979, I made mention of the fact that for many years our only visit to the Speedway was on Pole Day. Even when we moved to Peoria, Ill. in 1980 we continued making the drive over every year.

That went on until 1988 when, finally (!), my dad got us tickets to the 500. Of course, we had already been there for qualifying that year, which was an amazing day in itself. After the first week of practice, it appeared that Rick Mears and Mario Andretti would battle to the pole, as both had posted speeds above 221mph in practice during the week. Mears then went one better in the Pole Day morning practice, as he topped 222.

It was a gorgeous day, sunny and very warm, which brought in a huge crowd that was looking forward to a fight between two of the greats. That battle fizzled quickly, however, as Mario was the first car on the track and qualified at 214 mph, including a final lap of just 212 that hurt his average.

The run for the pole then became a battle of the Penske cars. Al Unser, Sr., back after his improbable fourth 500 win the year before, moved to the top of the pylon after his 10-mile run averaged 215.270. Danny Sullivan followed a bit later and on his second lap broke the one-lap record with a tour of 217.749. He slowed down during the run but was still on the provisional pole at 216.214.

And then Mears took over. Seeking his fourth pole, which would tie him for the record with Rex Mays and AJ Foyt, Mears officially shattered the 220 mph barrier on his first time around when he posted a speed of 220.453. As with most drivers that day, his times fell off with each subsequent lap, but he finished the day in P1 with a record run of 219.198.

Two weeks later, the Race Day weather was more of the same, bright, sunny and warm. My dad had found two tickets in the old Tower Terrace for race day, and we were all set to go. But then my 10-year-old brother, Tim, wanted to attend the race as well, and a last-minute ticket dash found us one in the South Vista, which was going to be my seat.

At the time I was a little disappointed that I would be sitting by myself, but it was what it was I guess. Once I was in my seat, it really didn't matter. We had stayed with one of my sisters the night before and made the drive down in the morning, parking on a side street that after the race seemed like a 100-mile walk from the track. Despite being an executive, Dad was a little, let's say, "thrifty", and chose to find a place on the street that didn't cost us anything.

Race Day is, again, one of those things you have to see in person to believe. I had been there as part of some pretty big Pole Day crowds, but what I saw that day didn't even compare. It was a sea of people, and colors, and quite the sensory overload.

The pre-race ceremonies were amazing, and for me were extremely emotional. They still are, in fact! Finally the cars were fired and row by row they eased by me. When the green flag fell, Danny Sullivan surged into the lead, Mears fell into second and Unser was third. Amazingly enough, Mears NEVER led the first lap of the race. He didn't worry about such petty things. 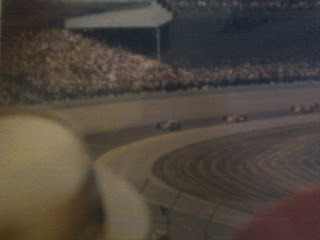 The roar didn't last long as Scott Brayton spun in turn 2 and collected Roberto Guerrero and Tony Bettenhausen in the process. I was quite disappointed as Guerrero had become one of my favorite drivers. I'm still not quite sure how that happened, but I guess it was because from the start of his career in 1984 he had been fast, consistent (two seconds, a third and fourth), and a front-runner. And by all accounts he was a very nice man who was extremely fan-friendly, which I found out was (and is) still true.

And in 1987-88 he also had one of the sweetest cars on the grid. Sponsored by STP, the day-glo color just popped off the track, and as several people put it -- the car looked fast just standing still. The year before, he had the race in hand after Mario had dropped out with 50 miles to go, but on his last stop couldn't get the car in gear -- due to his clutch being damaged when he hit a loose tire mid-race -- and spent more than a minute in the pits, which gave Unser a chance to come back from a lap down and take the lead.

Guerrero's bad luck continued later that fall when he crashed at the Speedway during a test session and was struck in the head by one of his tires. He was in a coma for 17 days but had returned in 1988 and qualified 12th.

The race went on, and Sullivan set a blistering pace, leading 91 of the race's first 94 lap. Sully had another one of the great-looking cars on the grid, with his gold and white livery representing Miller High Life. Sadly, that car ended up in a crumpled heap as Sullivan began battling a handling problem and hit the turn 1 wall when his car just wouldn't turn.

Jim Crawford, who had suffered serious lower leg injuries in a qualifying crash in 1987, got his Buick-powered machine to the front to lead eight laps at the midpoint of the race, while Mears led his first two laps of the day on circuits 102-103.

As usual, Mears had spent the first half of the race patiently dialing in his car, and at one point had fallen a lap down in 10th place. But by the time he had worked his way to the front, he had by far the best car in the field. Driving the bright-yellow Pennzoil Z-7 car, he led 87 of the final 95 laps and won the race under caution, which had come out with three laps remaining.

Emerson Fittipaldi, who would win his first 500 the next year, was scored as the runner-up, while Al Unser was third, Michael Andretti fourth and Bobby Rahal fifth. Rahal was one of the big movers of the day, improving 14 spots from his 19th starting position, while Crawford moved up to 6th after starting 18th.

It was an incredible day, and just like the 1993 race, which I chronicled here, the race has grown in stature over time. The race featured eight winners, but also had three drivers (Fittipaldi, Arie Luyendyk and Al Unser, Jr.) who would later go on to win, while Guerrero would break the 230 mph barrier in 1992 while winning the pole, with Brayton winning back-to-back poles in 1995-96 before losing his life in a turn 2 practice crash just a week before the 1996 500.

As far as Mears goes, that was the third win of his career, and he went on to win two more poles and tack on win No. 4 in 1991 before he retired from racing after the 1992 season.

Personally, I saw two of his wins and all six of his poles, so I consider myself pretty lucky, though I didn't know it at the time. Being young and more liking the people who drove to the front and had a "checker or wrecker" mentality, I didn't appreciate Mears' steady, patient approach. However, as time has gone on I have grown to understand what an amazing driver he was, and I have a great admiration for his cerebral driving style. Funny as it sounds, Mears was never one of my favorite drivers when he was competing, but he is now, and is a guy I would absolutely love to meet.

So, as they like to say, the roar was over for 1988. It's kind of weird to be in the grandstands when they have begun to empty out, as the Speedway has a "party's over" look. It's just a huge mess! Still, it's fun to sit in the stands and look out at the track while rehashing what had happened.

Leaving the Speedway afterwards is a little bittersweet, because you know it will be another 11-plus months before it comes to life again. This was pre-NASCAR days, so the track would once again settle into the mostly quiet neighborhood that surrounds it. Then the countdown begins to next May.