Dario Franchitti has made a career out of going fast when it counts. But even he was surprised by his performance Friday during Milwaukee IndyFest qualifying at the Milwaukee Mile.

After slogging his way through two practice sessions that saw him in the middle of the field, the defending pole and race winner here from a year ago popped two laps at an average speed of 168.737 mph and will lead the field to the green flag for the 27th time in his career, which ties Al Unser Sr. for eighth-best in IndyCar history. 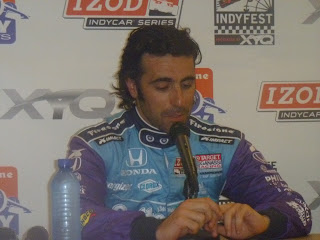 Going off 22nd in the 25-car field, Franchitti's run knocked Justin Wilson, last week's winner at Texas, off the provisional pole. Wilson had qualified at 168.237. Ryan Hunter-Reay (167.911) took the third spot, while Will Power (167.361) was fourth and Rubens Barrichello (166.899) qualified a surprising fifth, bettering his 10th-place start at Indianapolis as the best of his IndyCar career.

This is officially his first pole of the season, though he started P1 at Long Beach after Ryan Briscoe was hit with a 10-grid penalty for an unapproved engine change.

"I bet you guys are surprised to see me," Franchitti said in the media center afterwards. "We struggled in practice, it wasn't balanced, it wasn't quick, any of those things. We put our heads together and it worked for qualifying. I'm very much pleased as I am surprised."

Franchitti could only manage a speed of 161.461 mph in practice, good for 15th on the pylon, but he wasn't the only one from Target Chip Ganassi Racing to have trouble as teammate Scott Dixon was only 10th-best at 162.558. When it came to making adjustments, Franchitti said the two of them went "different directions" but it was his that took, as Dixon was only 11th-best at 165.726.

"I didn't expect anything like that, and I really want to credit the team," Franchitti said. "This is really special for me, to get this pole."

Now the real work begins. For as bad as he was in practice, and as good as he was in qualifying, Franchitti and his team now have the challenge of finding the medium that will work in the race. He admits that his team will be putting in a long night trying to find exactly where that sweet spot exists.

Wilson, meanwhile, will have a challenge of his own. Fastest in the second practice session and third overall for the day, he gives up his front row starting spot as one of seven drivers who will receive 10-grid penalties for swapping out his Honda powerplant. He will now start the day on the outside of row six next to Graham Rahal and joins Power, Dixon, Takuma Sato, Mike Conway, Ryan Briscoe and Josef Newgarden as recipients of the engine penalty.

For a look at the lineup, go here. 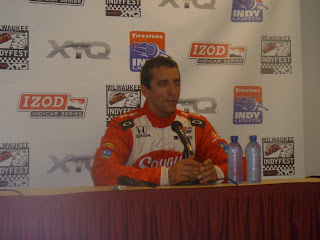 Still, it was a satisfying effort for Wilson and his Dale Coyne Racing team after hearing rumbles during the week about the 5-point, $7500 penalty they incurred after winning at Texas. While Wilson insists the punishment fit the crime, as the part left on the car added drag and gave him no advantage, he was happy that they came back a week later with a solid performance.

"The confidence has helped a lot. I feel like we have made some progress in understanding this car and what it is looking for," Wilson said. "We've been chipping away at it and making the car better and better, and I'm having a lot of fun.

"We were very pleased with last week, there was a concern about the 'legality' (of his win) but that's why we've tried to come back and back it up and prove that we are here and here to stay."

Wilson's only regret about the penalty is that it won't give him the chance to race Franchitti to the green flag, something he was looking forward to doing. Still, his second-place qualifying position is a career best at the Mile, topping his third starting spot in 2005 while in the Champ Car series.

That confidence he spoke of is why he has reason to believe that he can bring home a win from the 12th starting spot.

"I'm not writing off this race just yet," he said. "A 10-spot penalty here is better than on a road course, and hopefully we are in a great position. We've got a great race car, I'm hoping we can get back to the front and be there at the end again."

Other notes: Franchitti's last pole came at New Hampshire last year, a span of 12 races...Hunter-Reay's starting spot is his best since winning the pole for the Champ Car race in 2004...Power qualified fourth, marking his third top-5 qualifying effort in four races at The Mile...Saturday's race (225 laps/225 miles) goes off at 12:30 CDT and will be broadcast on ABC.

Polesitter Tristan Vautier took the lead from the green flag and led wire-to-wire to post his second win of the season, beating runner-up Sebastian Saavedra to the checkered flag by .3370 seconds. The Sam Schmidt Motorsports driver also won the season-opening race in St. Petersburg, and Friday's victory propelled him to the top spot in the season points standings. Vautier now has 241 points and leads Esteban Guerrieri -- who finished third Friday -- by three points.

"We put the car on the ground this morning and it felt amazing," Vautier said. "After two runs we got it tuned and we were great all day."

Vautier held a comfortable lead for much of the race, only being pressured by Saavadra on the two restarts. But Saavedra made it interesting in the closing laps as lapped traffic brought Vautier into his crosshairs. He got a good look in turn two with about 10 laps to go and got right up to Vautier's left rear tire, but couldn't complete the pass.

"For those last 10 laps I was pushing and giving everything I've got," said Saavedra, who finished 26th in the Indianapolis 500. "I guess I'm pleased. I'm not happy because I wanted that first place but it's very important points for the championship."

Vautier's win was also a historical one for SSM, as it represents the team's 50th win in Indy Lights competition.