Friday At The Mile!

It's 11:20 a.m. and I am wired in at the Milwaukee Mile media center. I'm going to be playing some musical chairs all day long as I didn't check the box for "deadline room" and do not have an official spot. Details, details!

Lots of racing media peeps are in the house, as I have already seen ESPN's Jamie Little and John Oreovicz as well as the Indy Star's Curt Cavin. Oh yeah, and Robin Miller is here too. I didn't recognize him at first since he is dressed like he's heading out on a 5-mile run. I'm going to try really hard to stay out of their way as they actually have jobs and deadlines.

So anyway, it's just over 80 degrees here and not a cloud in the sky...a great day to be at the track! If you are near Milwaukee, get here! Racing goes on all afternoon long as IndyCar qualifying starts at 4 and the Indy Lights race won't go off until about 5:40 p.m., with infield activities running until 9.

If you aren't nearby, cancel your plans for tomorrow, fill up your tank and make the drive. I only caught the last few minutes of practice but this is a cool place. The cars are fast and you can see all the way around the track from almost any seat!

Right now there is a pretty decent crowd for 11 in the morning, hopefully that improves as the day goes on. I don't think I am alone in saying this is a make-or-break weekend for IndyCar at the Mile. It is up to us to prove that we want racing here, as well as other ovals around the country. Put up or shut up. I'm here as a media guy today, and I am coming back as a fan tomorrow. I'm doing my part, how about you?

Alex Tagliani, last week's pole-sitter, is fourth at 163.377 and JR Hildebrand rounds out the top five (163.179). Probably the biggest surprise is that Rubens Barrichello is sixth on the pylon at 162.285.

Right now, the bigger names are P10 and below, as Scott Dixon, Dario Franchitti, Marco Andretti, Oriol Servia, James Hinchcliffe, Justin Wilson (last week's Texas winner), Tony Kanaan, Ryan Briscoe, Ryan Hunter-Reay and Will Power occupy positions 10 through 19, respectively. Can't read too much into that right now, with another practice session in about 90 minutes they might be working on tomorrow's setups instead.

On the Indy Lights side, Sebastian Saavedra leads the way at 143.984 mph and Gustavo Yacaman is P2 at 142.943. Lights qualifying begins in just about five minutes.

Oh yeah, one interesting thing about the Mile this weekend is that the outside walls are painted blue -- except for the backstretch which is in GoDaddy green -- no doubt a nod of respect to Boise State and their blue turf. It's unique, I think it will look pretty cool on TV.

The Indy Lights race will start an all-Sam Schmidt Motorsports front row as Tristan Vautier put his car on the pole at 146.884, while teammate Victor Carbone was P2 at 146.429. Bryan Clauson, driving for Fan Force United this weekend, will start ninth after turning a lap at 141.418. Clauson may need some more practice time to adjust to being back on pavement after winning the 30-lap feature in Putnamville, Ind. last night (kidding).

Saavedra, who starts third, is in final practice at 139.161, just a tick faster than Gustavo Yacaman (138.713). I will admit I know little about Lights, so I'm looking forward to checking out the race and learning a little more about the drivers. 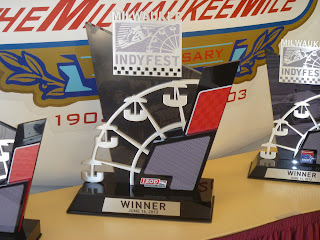 By the way, they have a little hardware displayed in the lobby of the media center. One lucky driver gets to take this home tomorrow afternoon.

One thing to note is that Will Power and Scott Dixon, the top two in points, are 9th and 11th so far today. Don't forget that they will suffer 10-grid penalties this weekend, so if they don't get faster they will have a lot of work to do tomorrow.

It has gotten very warm here with the air temperature at the start of practice up to 87 degrees and the track temp is sitting at 114. With no chance of shade settling over any of the track it should warm up even more as the afternoon wears on.

Walking up and down pit lane, and I seeing plenty of teams swapping out suspension parts to try and find more grip. Don't forget, they have the big wings bolted on the cars this weekend, so finding a road course-type balance will be important.

This is my first trip to the Mile, and while the corners aren't as flat as they look on TV, they have little banking. Still, the cars look good in traffic and there should be a lot of passing in the race. Speaking of traffic, with 25 cars and a 1-mile track, drivers will almost always be in traffic, which will make things interesting.

Right now Robin Miller is sitting just a few feet from me doing some work on his phone. Contrary to what you may think, he is not always as loud as he comes across on TV! OK, I'm trying to eavesdrop a little but I can't pick up a word of what he is saying! Looking for some info on the replacement race for China perhaps? If you haven't heard, Texas bowed out this morning, making that deck shuffled again.

Back in the media center after a long conversation with Pippa Mann and an interview with Sam Schmidt Motorsports engineer Kent Boyer, who is the lead engineer for Oliver Webb in the Lights series. He grew up just down the road from Aurora so that one was for the local paper. I'll post the link to that when it appears.

My conversation with Pippa was very, very interesting. After following racing for 30 years, I know a pretty decent amount about the sport, but to talk to someone like that just takes knowledge to a whole new level. There are just so many small, technical things that drivers to behind the wheel of a car, and she explained things in great detail but in a way I could understand. She just found out the will be doing the Lights race on IndyCar Radio, so listen if you can!

I mentioned that I saw the changes that teams were making to the car, and she called it a "mechanical setup". Boyer said that this track is 50 percent engineering and 50 percent driver. Lots of variables to get it right.

Which is a perfect segue into the 2nd practice session. Justin Wilson found something and jumped to the top of the timing and scoring chart, rolling around at 164.765 mph. Could he be evolving into an ovelmeister? He is also on the list of engine changes, so he moves back regardless of his position.

While I'm at it, here is the update list of 10-grid penalties, which now numbers seven: Takuma Sato, Dixon, Wilson, Newgarden, Power, Mike Conway and Ryan Briscoe. This will shake up things big time!

The sun has just been beating down all day, I will be interested to see what the track temperature is once qualifying starts. Here is the qualifying order:

Dario Franchitti found something after the last practice and is the polesitter with a 2-lap average of 168.737, while Justin Wilson rolled to a 168.287 for the tentative second spot. Presser just finished, Lights race goes off in 30 minutes.
Posted by Mike Knapp at 11:40 AM