Day Before the 500 Recap 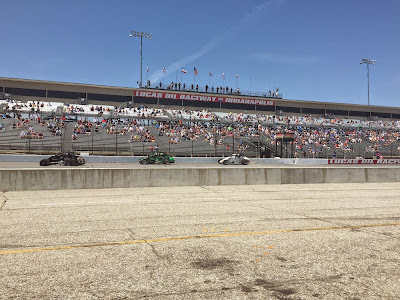 Earlier this week, I was having a hard time trying to decide whether to attend Legends Day at the Speedway or head out to Lucas Oil Raceway for the 70th annual Day (formerly Night) Before the 500 festivities. Since it is Kevin's first trip down for the race weekend, I left it up to him, and he decided he wanted to see some racing.

So after arriving at my sister's house in Elwood at about 2 a.m. -- Kevin had graduated from 8th grade on Friday night -- we were up at 9 to make drive down to LOR. It wasn't too bad of a trip, traffic was nothing compared to what it will be on Sunday, and we breezed down there in about an hour.

I ended up getting the pit pass tickets for both of us, which include admission to the grounds and a green wristband so that we could enter the pits. In the end, we were glad we got those, but more on that later.

Believe it or not, Saturday was my first trip ever to Lucas Oil Raceway. Back when I lived in Indy in the early 1990s, I'd watch the racing out there on ESPN, and while I kept saying over and over I should go out there, I never did.

Needless to say, I was really impressed with the facility. The grandstands are very nice and from pretty much everywhere you have a nice view all the way around the track. There is a grassy hill in Turn 1 that looks like it offers some pretty nice sight lines, but we didn't make it over there. 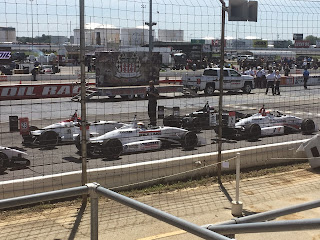 We arrived just in time for USAC Silver Crown qualifying. That race was going to be wedged in between two Mazda Road to Indy races, the USF2000 Freedom 75 and the Pro Mazda Freedom 90. Though I love the noise of open wheel cars, there is just something about that throaty roar that comes from a Silver Crown, or even a stock car. There is just so much power behind it.

We sat in the grandstands for the USF2000 race, which was won by Jake Eidson, who turns 20 years old on Sunday. There wasn't much racing up front as Eidson won flag to flag (in fact, all three races had that same result), but there was some good racing going on in the pack, and Eidson was fun to watch because he was so smooth working his way through traffic.

Nico Jamin finished second and kept that all important points lead, while Aaron Telitz was third to put two Americans on the podium.

Then it was on to the Silver Crown race, where Tanner Swanson was without peer, winning the pole and leading every lap to win by 16 seconds over his brother Kody. Both Swansons were on top of their game as they were the only two drivers on the lead lap at the end. 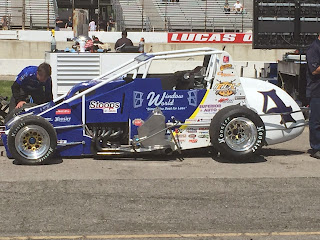 Also in the field was Jarrett Andretti (here's his car), who was there with his dad, IndyCar and NASCAR veteran John, in his pit, as well as his grandpa, Aldo. No sign of Mario or Michael...darn it. The third-generation driver finished 11th.

What was really fun about that race is that Kevin and I watched it from the pit wall. When we first went into the pits we saw some other people with green wristbands standing behind a yellow line, so we parked there too. But as the race was starting I saw some other people walking towards the pit wall, so we headed there too. Ask for forgiveness instead of permission, right? Nobody seemed to mind too much, which means a green wristband is a little like flying first class, they pretty much let you do whatever you want.

(Yes, that's a Wedding Singer reference, in case you were wondering)

We ended up standing next to Eddie Sachs, Jr., whose No. 25 car driven by Davey Ray dropped out early with engine problems. I didn't know that he owned a team, so that was kind of interesting. 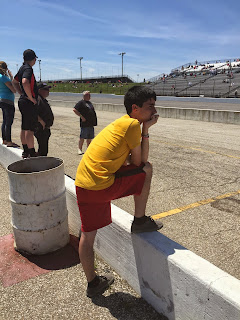 Once the race got going I got a good laugh out of this picture of Kevin. He has "the pose" of a car owner or a crew chief going, doesn't he? All he needs is a headset and a stopwatch. That is where his interests lie...so maybe someday! Actually, with this pose he kind of reminds me of Roger Penske!

Kev was getting a little bored and wanted to go home, but I gave him a nudge to stick it out, and he said at the end of the day the Pro Mazda race was his favorite. Good thing!

In that race, Weiron Tan jumped out to an early lead and never looked back to pick up his third win in the series. Will Owen was second while Neil Alberico was third. With Tan doing work up front, most of the good racing was back in the field as several drivers had some great battles, and there was even some three-wide racing in places. Good stuff! 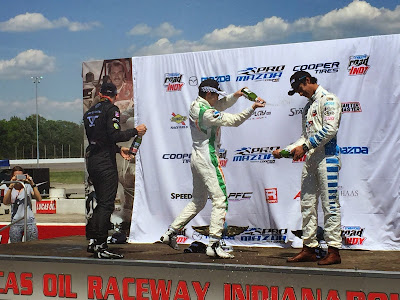 We watched that race from the stands, but they opened the gate near the start/finish line and fans started moving onto the track, so we just followed the crowd and got a front-row view for the post-race celebration.

All-in-all it was a really fun day. We got to see some racing and get some up-close action, and it definitely whetted our appetites for the big race!

No doubt that it will more than likely be on our schedule next year as well. It should be on yours too!

Below are the starts and first laps of each race!