Remember a few days ago when I said that the IndyCar series was one race day away from redemption? Well, it's safe to say they got it Sunday. Once again, when it mattered, the series got its act together and put on an amazing show.

In year four of the DW12 era, and the first using the new aero kits, the drivers put on a performance for the ages. I don't know if I can put what happened today into words, but I'll try!

Let's roll through the Top 10 finishers, and I'll throw my thoughts on a couple of other topics as always.

Winner: Juan Pablo Montoya. I can't believe it! I finally correctly picked a winner! Actually, two of my predictions came true, as I said there would be more lead changes than last year, which there were by a count of 37-34.

Anyway, I felt like JPM came into the month with a lot of confidence, having already won a race and holding the lead in points. My faith was tested when he only mustered a 15th-place starting position in qualifying, then was only 12th-fastest on Carb Day. And to make matters worse, he dropped to 30th place when he needed a new rear wing after contact with Simona de Silvestro. Which, by the way, happened before the field had even completed one lap under green.

But in a drive that was eerily similar to that of Dario Franchitti's 28th-to-win run in 2012, JPM just started digging, making adjustments on every stop and driving completely angry. Unlike us mere mortals, where driving angry leads to bad things, when JPM is in that mode he makes magic happen. It wasn't easy, on a Twitter chat hosted by the AP's Jenna Fryer, I asked how many times he had to make wing adjustments and when he felt like the car had come to him.

Here was his reply: "Every stop except the last one. Car came to me 1 stop from the end."

As the race came down to the final stretches, when it mattered, he was the bravest driver on the track and finally took the lead for good when he passed Will Power with two laps to go. That's what he does.

One thing I noticed after the race was how this win is a big deal for him. I didn't feel that way when he won his first 500 in 2000. Back then, the race was just a stepping stone for him to Formula 1, just like it was for Jacques Villeneuve five years earlier. This time, he was genuinely excited to win. Getting older helps, but up until 2000, racing had come really, really easy for him. In the 15 years since, it hasn't, and he rolled into Victory Lane a very humble champion.

I think this win will change many people's opinion about him, and while he isn't going to be as beloved a champion as other drivers, he can now be considered an Indy 500 legend, and though he has run the race only three times, it fits. When you consider the fact he has won in IndyCars, F1, NASCAR and endurance racing, he might be one of the better all-around drivers of this era.

Runner-up: Will Power. Overall this was Will's best 500 of his career, as before Sunday his best finish was fifth and he has only been in the Top 10 three times in seven races. He drove a solid, mistake-free race, just got beat by a better car and driver. But if he keeps driving like this he will win Indy someday.

Third: Charlie Kimball. What a great run by Charlie. Though he pretty much got freight trained when he had the chance to run on the point, he was well into the mix at the end. If his car had been a little better he would've been set up to make a run for the win. Mid-race he was really moving, as he posted the race's top lap (226.712) at the race's halfway point.

Fourth: Scott Dixon. The class car and driver who was the dominant driver through the race's first 150 laps. But as longtime watchers of the 500 know, the driver who dominates a lot of the race doesn't always win. I didn't hear what Dixie had to say about the final 50 laps, but before that he could do almost anything he wanted with his car. Though he led a race-high 84 laps, just six came in the final 125 miles.

Fifth: Graham Rahal. His impressive driving continues as he was first in class with the Hondas. I think he had resigned himself to the fact that they just didn't have the speed to contend for the win but came away with enough points to sit fifth in the standings, just seven points out of third.

Sixth: Marco Andretti. Like Rahal, it was kind of a ho-hum day for him. Though he was never out of the Top 10 once he broke into it, he never was able to push to the front, either. Still, it was his sixth Top-6 finish in 10 appearances at Indy. Let that sink in a bit, Sunday was Marco's tenth Indy 500! And he is still only 28! He still has plenty of time to win one, and I think he will. One more note, it was also the 70th start by an Andretti at Indy (Mario 29, Michael 16, John 12, Marco 10, Jeff 3).

Seventh: Helio Castroneves. The quest for win No. 4 continues. Helio is another guy who just didn't have it Sunday, he only led for two laps and seemed to disappear for long stretches of the race.

Eighth: JR Hildebrand. If no other opportunities present themselves in racing for a while, though they should, Hildebrand can make a pretty good living just one-offing at Indy (he ran the Angie's List GP too). Once again, he drove well, and finished higher than teammates Josef Newgarden and Ed Carpenter.

Ninth: Josef Newgarden. Started ninth, finished ninth, ran around ninth place all day. On the good side, it was a career-best finish for Josef at Indy, on the bad side, his CFH Racing team destroyed three perfectly good race cars while finishing P8, P9 and P30 (Ed Carpenter) on the day. Time to just load up the hauler and head to Detroit.

Tenth: Simon Pagenaud. I thought for the first 480 miles or so that Simon ran a brilliant race. He took what the car gave him, ran up front (eight times for 35 laps) and looked to be ready to contend for the win, only to have equipment issues that forced a late pit stop. He remarked at the Victory Banquet that he'd like to drive for Team Penske until he is as old as both Montoya and Castroneves -- 40. If he does that he will win a 500 between now and then.

A couple of extras...

13th place: Ryan Briscoe. All things considered, Ryan ran the type of race that was expected of him when Sam Schmidt brought him in to drive James Hinchcliffe's car. After being clipped and spun out during the opening lap incident between Sage Karam and Takuma Sato, Briscoe got the car restarted, stayed on the lead lap and quietly started moving up, and in the end had improved 18 spots over his starting position. The sad fact of racing is that there are only so many seats for so many drivers, and oftentimes Briscoe loses the game of musical chairs, but more often than not, when you give him a car he does well in it.

26th place: Tony Kanaan. As usual, the loudest cheers of the day were for TK, and over a quarter millions hearts broke along with his when he crashed in Turn 3 with 50 laps to go. In the early going, TK was the one that had something for Dixon, and having only needed four turns at the front to lead 30 laps, he had a very hooked up car. If he had been in the mix in the closing laps, that would've taken the drama absolutely sky-high.

Chevy vs. Honda. Chevy, Sharpie. No doubt Chevy has held the upper hand all season, but it was to the extreme at Indy, with eight of the first 10 finishers driving under its banner. Of the two Hondas, one was driven by a driver absolutely on fire now (Rahal) and the other was by a guy who has the "going fast at Indy" in his DNA.

Youth not served. But speaking of YOUNG American drivers, it was a tough day for both Sage Karam and Conor Daly. Daly's day was over before it even started as he didn't even take the green flag after experiencing engine problems, while Karam's race lasted all of about 10 seconds after he was involved in a first turn incident with Sato. Not his fault at all, but the toughest lesson you can possibly learn is that it is possible to lose a 500-mile race on the first lap. Unfortunate for both of them, but they move on to drive another day. 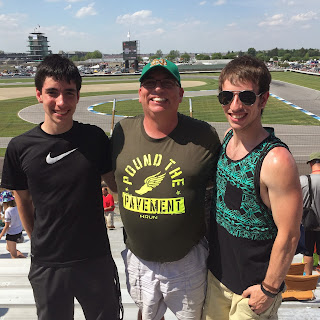 I could go on forever about what I saw Sunday, but I must say, the thing that was the most fun for me was having Matt and Kevin along for the race. Matt started coming with me in 2011 -- what a great year to start, right? -- while Kevin attended the race for the first time. It was such an enjoyable day for me, and I'm already excited thinking about next year!