A Wild Day at The Mile

Finally getting home and digesting the race a little bit, and let me first say, that was one of the crazier races I've seen in quite some time!

(Editor's note: If you scroll down on this blog you will see that I have made a couple of editing changes. I've had a change of heart -- I love IndyCar and love this little blog too much to let it go. Sorry for the drama, although I still think Robin Miller is a clown and I will be hitting the "unfollow" button on Twitter a lot in the coming days and weeks.)

But anyway, there were advantages and disadvantages to being at The Mile on Sunday. The advantage was that there was a lot of good racing that hopefully those of you who watched it on TV got to see some of (the race is on my DVR, I'll watch it tomorrow night), but the disadvantage was that there were so many crazy strategies going on it was a little hard to keep track of who was coming and who was going!

Lots of big name and big team drivers spent the day riding around in the midfield until several made some hay in the final 50 laps. Most of that was due to taking tires after the final yellow when Justin Wilson's motor expired with 27 laps to go, as 10 teams laid out four fresh Firestones and took a gamble that paid off.

Either way, Sebastian Bourdais drove one hell of a race. In the era that we currently reside, it's so rare to see one car and driver just absolutely demolish a field like SeaBass did on Sunday. The last yellow just made the race look closer than it actually was. Kind of like how a football team is down 42-14 with five minutes to go and scores a couple of late touchdowns to make it look respectable.

So let's go through the Top 10 and a few other things: 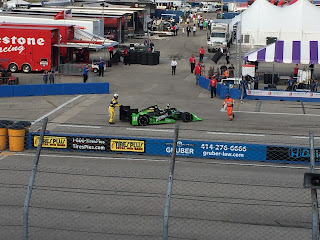 Winner -- Sebastian Bourdais. Seb channeled his Champ Car form on Sunday, and while I normally don't like it when one driver (or in this case, two, but more on that later) dominates a race, when someone puts on a performance this special, it's really a lot of fun. Seb could do pretty much whatever he wanted over the final half of the race, and I will be interested to see how many cars he passed on track, because every time I looked at him it seemed like he was going around someone.

This was his first win on an oval since he came back to IndyCar, and a good win for a good guy. A few years ago, do you think we would've said that? But seriously, he's really one of the good guys of the series.

2nd place -- Helio Castroneves. Kevin and I were listening to qualifying as we were driving up and I was a little shocked to hear of the snafu that Team Penske pulled off to send Helio to the back of the field. Last to second is a pretty good drive, don't you think? I feel like these next two weeks are crucial to the championship hunt...anything can happen on short tracks, and with Iowa and Pocono the only remaining ovals, things can change in a hurry.

3rd place -- Graham Rahal. This has gone on long enough to say that Graham is -- finally -- for real. Now sitting third in points, GH is having a breakout year and driving with a ton of confidence. Of course, there was some whining about him on Twitter, because everyone likes to whine about him on Twitter, but let's be honest, he's putting up results.

4th place -- Juan Pablo Montoya. JPM was one of those who seem to spend a lot of the day running around in 10th place or so but was able to end up with a respectable finish. Which given the points implications was huge. While the day didn't always totally go his way, he leaves MKE with a bigger lead over Scott Dixon than when they arrived this weekend, and right now that's all he really needs to worry about.

5th place -- Josef Newgarden. I think the bar has officially been raised for Josef, because I felt like with the car he had that his result should've been better. Winning the pole and dominating the first half of the race, and eventually leading 109 laps, he is officially moved into badass territory and is now on the short list of guys who can be considered a contender week in and week out.

6th place -- Tony Kanaan. Just a really quiet day for TK. I was a little surprised to see he only led three laps given he had one of the more uneventful days in the field and mostly ran near the front, but it was a pretty workman-like day overall for TK. Look for him to be super motivated at Iowa on Saturday night -- he dominated last year's race only to have it pretty much stolen from him at the end.

8th place -- Marco Andretti. See Dixon, Scott. Marco is in the hunt a lot more than he used to be, especially on ovals, but needs to put it all together one of these days and get the monkey off his back that Graham Rahal handed him a couple of weeks ago. Marco is the only driver to have completed every lap this season, which to me lends a lot to his maturation process.

9th place -- Simon Pagenaud. Simon's improvement of eight spots over his starting position was third best in the field behind Castroneves (22 places) and Bourdais (10) but he didn't have as much fun as those guys did. He's going the wrong way in the standings and needs to fix that fast.

10th place -- Ed Carpenter. This is where I get a bit brutal for a minute. For a guy whose sole focus is ovals, he has been awful this season, and I'm beginning to wonder where his head's at. For the record, I think he is a fantastic owner, and will win the Indy 500 in that capacity someday. But as a driver he fails to take any accountability for his on-track actions, something that if one of his employees did I'm guessing he wouldn't tolerate. I also think he showed very little class and sportsmanship early in the race, when he was near DFL and Newgarden pulled up to put him a lap down. He held Newgarden, his teammate, up for close to 15 laps, which allowed Ryan Briscoe to keep Josef in his sights.

I'm all for battling to stay on the lead lap, but when you fall a mile behind just 12-13 miles into the race, you get the hell out of the way and figure it out. Your problems aren't their problems.

18th place -- Justin Wilson. I'm adding a couple of names to this list as notables, and Wilson is one of them. I thought he drove a fantastic race yesterday until his mechanical issues (and a long pit stop) at the end. 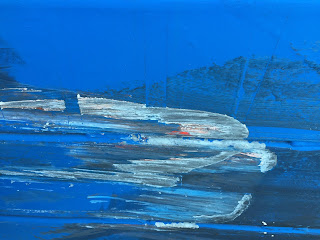 22nd place -- Will Power. The champ's title defense took a huge hit (as did the SAFER barrier, as you can see in the photo) when Briscoe spun out ahead of him on Lap 131. He's now 70 points behind Montoya, and while he's been known to make up points in a hurry --  as he's done in years' past -- Montoya is a little too good to make stupid mistakes to let him back into it. After everything going his way last year, the luck has turned a little, which shows how  many things need to go right to win a title.


One day show -- The qualify/race in one day idea is something I've floated in this space before, and I think it led to the improved attendance at the race. Good weather helped too. It's simple: people want their money's worth, and if you give them more activities to watch, they will make it worth their while to go. I know the team's hate it, but when you are begging for fans you give them what they want.

Track walk -- Another cool item this year was the chance for fans to walk the track after the race, and a couple hundred of us took advantage. Walking the track was both fun and historic for me, and it should be a staple at oval tracks during the season. Props also go out to Takuma Sato, who came over and spent several minutes signing autographs for fans. 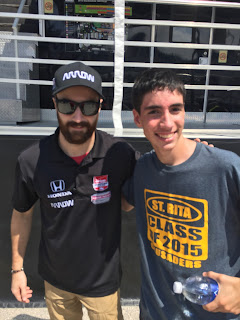 Hinch -- It was good to see The Mayor at the track again, and as you can tell by this photo with Kevin, appears to be in very good form. He was in a hurry to get somewhere but was nice enough to stop and pose. I asked him how he felt (over the roar of the Indy Lights race) and he gave me a huge nod and a thumbs up. Awesome.

Can The Mile be saved? -- After every Milwaukee race, the speculation arises as to whether or not enough had been done to bring the race back another year. My answer is: I sure hope so!

It's a favorite track with the drivers and it has so much history that it would be missed by a lot of people if it weren't on the schedule. Having now gone to the race the last four years, I've seen the crowds grow and the infield become busier with more people, activity and sponsor activation. It would be such a shame to see it go away now.
Posted by Mike Knapp at 1:36 PM