As longtime readers of this site know, I add the exclamation point to the title of the Iowa race given the long history my family has in the state, and how cool it is to be a part of that heritage. I was born in Davenport and while I only called Iowa home for five years, my family's lineage in the state goes back well over a century, so it will always be a special place for me. 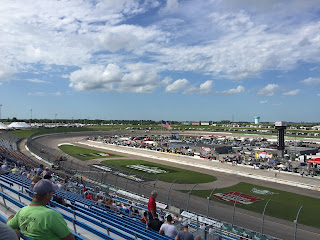 And we can throw a few exclamation points out there for it being such a great race! With the weather being so nice and other races on the slate (more on that later), lots of people showed up and made it for a great environment. I love this racetrack for a lot of reasons, and it was in full song on Saturday in a lot of ways.

I have so much to talk about, I'm splitting this post into two entries, with the second coming tomorrow. We've got lots to cover, don't we? Let's spend today talking about the Top 10 and rock the hot takes tomorrow. 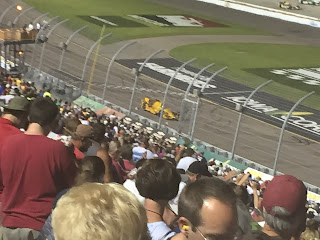 Winner -- Ryan Hunter-Reay. Or I could also say...Andretti Autosport, which put a driver in Victory Lane for the SIXTH straight year, with RHR making it two straight and three overall. Hunter-Reay never got to the point all race until he beat Josef Newgarden out of the pits with 37 laps to go and held off the field in a couple of late restarts. The victory breaks a 13-month string without a win and is just the third Top 5 in that span. It's just been a lost season for him, but it's a good way to start building up for 2016.

Runner-up -- Josef Newgarden. For the second straight week, Newgarden was the class of the field but came away empty in search of his first oval victory in the IndyCar Series. He now is first in the series in laps led on the season and is moving his career into beast mode.

Third place -- Sage Karam. Lots has been said about Sage's aggressive driving (more on that later as well) but overall I thought he did a fantastic job on a track that he'd never raced an IndyCar on before. Did he get a little loose at the end? Sure, but I'd rather see a guy go after it than say after the race they had a "fifth or sixth-place car". He's 20, and is racing in a way he sees fit to continue his racing career. The racing world is full of great drivers who tore up a bunch of equipment at the beginning of their careers. He's no different.

Fourth place -- Graham Rahal. Probably the drive of the night, in my opinion. A screwed up gearbox that couldn't get out of sixth gear might have been the least of his problems as he lost two laps early to another issue. Once he was back on the lead lap -- and then when he took tires during the last caution period -- Graham was an absolute rocket. It was crazy to see the way he overtook and put away cars when he had the new set of kicks on at the end of the race. Oh, and by the way, look who is second in points?!?!?

Fifth pace -- Carlos Munoz. It's an oval, and one that AA has had success...sound familiar? Contrary to his road racing roots, Carlos loves fast ovals where he can drive hard and take chances. And it seems like the faster the track, the more that attitude works for him.

So outside of RHR, can we call the rest of the Top 5 "The Future"? There was some serious young talent at the front of the field Saturday night. I could get used to it...how about you?

Sixth place -- Ed Carpenter. Once again, Ed distracts people from a well-driven race thanks to another post-race hissy (more on that later too). I understand heat-of-the-moment things, but personally I find the need to confront someone every time you think you are done wrong completely unprofessional. It makes for good theater if you are the type of person who needs drama to be a racing fan, but to me it comes across as a total "Born on Third" mentality from someone who should know to conduct himself better.

Seventh place -- Marco Andretti. Marco took tires late and I thought he would follow Graham to the front, but his charge fizzled out fairly quickly. Still, I am really impressed with Marco and his consistency this season. He is still the only driver who has completed every lap this year and with some good luck he could finish the season in the Top 5 in points. After all, he's only 45 points behind second place Rahal.

Eighth place -- Ryan Briscoe. After seeing his last two races end with his car on a hook and having to call his wife from the infield care center, an event-free evening was what Briscoe really needed. I'm not sure if he is in the car for the last three races -- someone help me out here -- but if he is he has podium finishes at Mid-Ohio and Sonoma in the past, and could be another guy who could finish the season on a positive note.

Ninth place -- Sebastien Bourdais. Started 24th and finished ninth is all you need to know about Seb's drive. The biggest mover in the field -- again -- he was just too far back and the pit strategy didn't fall into place the way they needed it to. Still, Bourdais has done some impressive work on the ovals the last few weeks.

Tenth place -- Will Power. Really? The best a Penske car could do Saturday night was 10th? After qualifying all four cars in the top six positions, EVERYBODY on that team went backwards from the drop, starting with points leader Juan Pablo Montoya having a suspension failure and smacking the wall just 10 laps in. Helio Castroneves finished 11th and Simon Pagenaud finished 14th.

Speaking of JPM -- His DFL could've delivered a huge blow to his championship hopes, but Scott Dixon, who at the start of the night was second in points, had a mechanical issue that left him 37 laps down at the end. That meant Dixon only got six points closer, so Juan dodged a huge bullet as Rahal is now in second but 42 points back.

Justin Wilson -- I'm starting to figure out, or at least developing a theory, as to why Michael Andretti put him in a completely unsponsored car for the last few races, and possibly the rest of the season. Wilson has long had a reputation as a fantastic test driver, so if a team is looking ahead to 2016, wouldn't it make sense to put a guy like him in the car and let him help you figure stuff out? Though he has had some bad luck in each of the last two races, when Wilson has been on he has been fantastic in race trim.

OK, so we're halfway there for this week. Look for part two sometime tomorrow!
Posted by Mike Knapp at 5:46 PM